Great news for comic book fans: Dynamite Entertainment will publish three brand new series of Stargate comics, one for every incarnation of the popular television franchise.

The SG-1 and Atlantis series will be promoted as “Season Eleven” and “Season Six,” respectively, picking up where the television shows left off.

“Stargate is truly a crown jewel when it comes to episodic science fiction television,” Dynamite President Nick Barrucci said in a press release.  “Just in time for the Stargate Universe series debuting in October, Dynamite will create an adventure series retailers and fans alike will love.  We have three separate launches planned, each designed to focus on the characters and attention coming the way of both the new show and Stargate SG-1 and Stargate Atlantis!”

The talent assembled to bring Stargate to the comic book medium includes some significant names in the industry, including artists John Watson (whose work has appeared on the covers of Marvel) and Dave Dorman (Star Wars). Dorman will serve as the main cover artist.

To launch the three series, Dynamite will publish a special “Stargate #0” issue, available to readers for just $1.00.

“The great opportunity presented by the comics medium is not simply the chance to finding new fans, but the ability to tell original stories that enhance the show experience,” Universe and Atlantis co-creator Robert C. Cooper said.

While the studio has not yet announced a time table for the comics, the fact that an SGU prequel story is in the works may indicate that the first issues will show up this fall. Stargate Universe premieres October 2 in the U.S.

The first Stargate SG-1 and Atlantis comics were published earlier this decade by Avatar Press. Neither series ran very long, with Avatar shutting down the series after the debut of its first Atlantis series, “Wraithfall,” in 2006.  The SG-1 series included just over a dozen issues between 2003 and 2006.  While the publisher never announced an official end to the series or the reasons why, soft sales are a likely culprit.

Dynamite Entertainment was founded in 2004 and publishes titles including Battlestar Galactica, Red Sonja, Army of Darkness, Zorro, and more. Check them out on the Web at DynamiteEntertainment.com.

Head to Pop Culture Zoo to see the initial report, or continue to Page 2 to read the full press release. Dynamite was also kind enough to send along a few brand new photos from “Air,” the series premiere of Stargate Universe! Check them out below or in the Stargate Gallery.

(Thanks to RoX and Michael for the tip!) 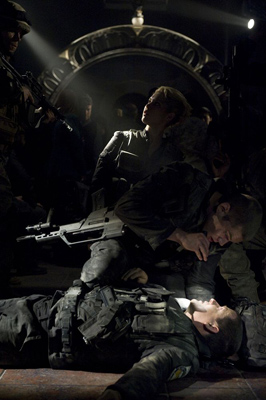 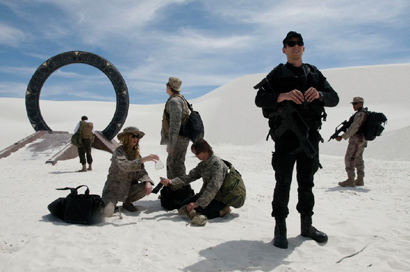 Awesome! I’m not a big comics fan but I will be definitely buying these :) I’m glad that someone besides Fandemonium is doing something for SGA, especially since it seems like TPTB flushed it down the drain. Thumbs up, Dynamite Entertainment!

This is cool and all… but will the Atlantis one screw up the movie they are making (ie Atlantis being on earth?)

@darsfog: Wow, you still hold hope that they’ll actually make the film? You have my admiration ;)

did it say when they would be coming out?

I’m sooo very excited! Avitar Comics really dropped the ball by only having 10 pages per issue and terrible art(copied from photo stills) and stories that never meant anything. I pray that all changes now:)

I shall be interested to see what they make of the Atlantis comic… I’m not interested in the other two series.

I have all the Atlantis ones published by Avatar, even though they weren’t very good.

Oh yes! Awesome! I’m a huge comic book fan and its great to see Stargate SG-1, Atlantis, and Universe having on-going comics series at last! I’ll definitely be buying! Bring them on!

This is great! I have read all the Atlantis comics and have memorized several of the episodes (my frieds kinda freak when I start saying everything that the actors do, at the exact moment that they say it…Lol!) and have devoted my undieing love and devotion to the show. I’ve also read all the books and I must say that they are AWESOME! And I even like a few of them better than the actual show. (Read Mirror, Mirror you will absalutly love it) So this is really great! TPTB shall never redeem themselves (lays evil curse on them) for… Read more »