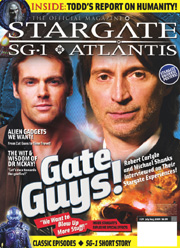 Beware of minor SPOILERS for the first season of Stargate Universe in this report.

With the clock ticking down to the October premiere of Stargate Universe, there’s still a whole lot about the crew of the Destiny that is shrouded in mystery. But now new details on the enigmatic Dr. Nicholas Rush have surfaced, courtesy of actor Robert Carlyle.

“What we know so far is that he’s been married, but his wife is dead,” Carlyle told The Official Stargate SG-1/Atlantis Magazine. “The fact that he was married is the only thing that actually roots him in reality, because he ‘lives’ in a different type of reality, one, I believe, in his own mind.  Rush is by far the biggest expert on Ancient technology, and when his wife dies and he gets the chance to go on this exploration of the universe, he jumps at it because there’s nothing left for him [on Earth].”

Rush finds himself trapped on the Ancient ship in a distant galaxy in the show’s premiere. But unlike the rest of the team, he doesn’t want to go home.

“As far as our story and where our people end up, it’s Rush who tells them that there’s no chance they can ever go back, and he thinks there’s nothing greater!  This is the best potential for exploration that mankind has ever known.  That’s what’s driving Rush; and therefore he’s probably not to be trusted by anyone on the crew.”

Rush’s nemesis on board the ship, the actor reveals, is Colonel Everett Young (Louis Ferreira, formerly Justin Louis).  “It’s quite serious,” Carlyle said. “Without giving too much away, there’s an episode, which we’ve yet to shoot, where a tragedy takes place aboard the Destiny and Rush tries to frame Young.  They hate each other that much. … They’re against each other from day one and that’s been developing beautifully over the past six or seven weeks of filming.”

Off-camera, though, the two actors have become fast friends.  And Carlyle himself is enjoying the experience of television production and the Stargate family.

“I feel as if I’ve been given something of a reward for 25 years of hard work in the business because this is just a terrific experience,” he said. “I’m almost frightened of waking up on morning and someone taking it all away. It’s a great way of working and the reason why I became an actor in the first place. … I can’t speak highly enough of the cast as well as the crew and this particular creative process.”

The newest issue (#29) of the magazine also features an interview with Michael Shanks (“Daniel Jackson”), who talks about (among many other things) his “brief cameo” in the SGU premiere.

For more from Robert Carlyle check out the newest issue of The Official Stargate SG-1/Atlantis Magazine, on news stands now! The July/August 2009 issue also features an interview with special effects coordinator Scott Stofer, plus a look at Stargate’s “Top 10 Devices,” and more.  Subscribe or find back issues of the bi-monthly publication at TitanMagazines.com.

^yeah. what the hell. i dont get it

Justin Louise was born Louise Ferreira. He must’ve just changed his mind about how he wants to be credited for Universe.

I do like the sound of this though. All is not happy families on Destiny and there are major conflicts between the main characters which extend beyond the current episode.

Well, sometimes actors change their professional names. Anyone remember in the early seasons of DS9 when Alexander Siddig was named Siddig El Fadil?

My bad, I am not trying to imply any transexualism! :)

Yeah, I remember Siddig’s name change on DS9. But the name change for Justin Louis caught me off guard here because the way the article read (to me) was that Justin Louis had left the show and was replaced by another actor (Louise Ferreira). If I hadn’t read the comments section I would have missed that. LOL.

I wonder why he decided on the name change, btw? Maybe something to do with working in Canada and the laws here? Or just a personal decision? Either way, its great that Carlyle is so excited and happy to be working on SGU.

I’m almost frightened of waking up on morning and someone taking it all away.”

I guess Carlyle is worried that Rush may just get killed off the show suddenly. Isn’t that what TPTB is gunning for with SGU?

Whats this about “Rush is by far the biggest expert on Ancient technology” what about Rodney and Sam, at least Rodney, and this new guys pops up and he knows more, i dont know about this

I know people always complain when a show changes but I can see more people leaving over this than anything else.