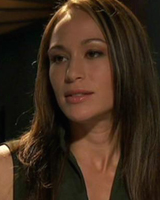 Stargate Atlantis actress Sharon Taylor has been cast in a guest appearance on the CW superhero hit Smallville, KryptonSite.com is reporting.

Taylor played Amelia Banks, an Atlantis gate technician who was more heavily featured late in the final season of Stargate Atlantis.  (You may remember her kickboxing Michael’s hybrids in “The Prodigal,” or getting close to Ronon at the close of “Enemy At the Gate.”)

According to the site but still unconfirmed, Taylor is likely to play a tough soldier named Fiona in the ninth season of Smallville.  The character may be recurring.

Smallville returns to The CW in the United States on September 25.  Taylor’s episode, “Savior,” is the season premiere, and will also feature Alessandro Juliani (Battlestar Galactica‘s Felix Gaeta, who appeared in the Stargate SG-1 episodes “Scorched Earth” and “Moebius”).

(Thanks to Tim for the tip!)