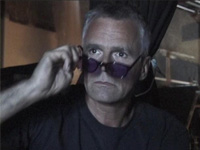 The GateWorld Gallery marches steadily upward with screen captures from the Stargate DVD special features! This week we add Season Seven to the already massive section, featuring more than 2,000 images.

Season Seven featured DVD Special Features Producer Ivon Bartok’s “Beyond the Gate” series with the cast of SG-1, as well as several Directors Series featurettes. Below is a breakdown of each feature and links to the screen grabs!

Next Monday will see the arrival of SG-1 Season Eight special features to the GateWorld Gallery, so stay with us!