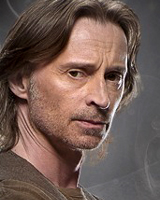 After more than a year of waiting, the third Stargate television series arrives today!  Stargate Universe premieres tonight at 9 p.m. (8 Central) on Syfy in the U.S. and on SPACE in Canada.  (It’s coming Tuesday on Sky1 in the U.K., and next Friday on SCI FI Australia.)

Members of the press have been watching and reviewing the 3-hour premiere (two hours air tonight, and Part 3 next week) for a few weeks now, and we’ve been keeping track of what they have to say.  And there is a significant explosion of new reviews today.

The media attention is significant, with even major, mainstream publications like TV Guide listing Stargate Universe as one of the Top 10 new shows to watch.

Below you’ll find all the SGU reviews we have found so far.  Beware that many of them do contain SPOILERS for “Air” — some minor, but some that give away most of the episode.

Also check out GateWorld’s own review of “Air!”

TV Guide: “[There is] an unusually grim urgency and tension to what had always seemed to me (on the occasions I sampled it) a relatively escapist romp through the galaxies.”

About.com:  “It’s possible at times to feel, aboard the Destiny, that this is a constructed thing, lost in the infinite and horrifying vacuum of space, and offering its unexpected passengers far from perfect protection from it.”

TV Overmind:  “Stargate Universe is a Stargate for the rest of us. … Stargate Universe retains that brand of high-octane fun, but pads it with subtle mysteries, challenging character conflict, and tried and true cliffhanger styled story telling.”

TwinCities.com: “The look and feel of Stargate Universe is firstrate, and relentless action during the first part of series kickoff had me fantastically stressed.”

A.V. Club:  “I would not be surprised if Stargate Universe randomly turned into a pretty fun show somewhere along the way, but in its first three episodes, it’s not there yet.”

Chicago Tribune:  “So far the gloomy, underwhelming Universe seems to have ditched many of the elements that the previous Stargate shows had, notably camaraderie and a sense of adventure, without adding much in the way of narrative suspense or complexity.”

TV Squad: “Stargate Universe might signal a bold leap in a new direction for the Stargate franchise, but it’s nothing most TV addicts – especially sci-fi fans — haven’t seen before.”

Airlock Alpha: “Universe will find it difficult to be grouped with its Stargate siblings, but that’s OK.  It’s a show that stands all on is own.  And while it may never be Battlestar Galactica, there’s a good possibility Stargate Universe could be this generation’s Star Trek: Deep Space Nine.”

Lunch.com: “There is no doubt in my mind that SGU will be a hit.  With a more serialized season forthcoming, viewers will truly get a chance to get to know these characters while also going through the pains and hardships of life aboard the Destiny.”

Chicago Now: “SGU marries many familiar sci-fi conventions with relatable emotional stories to create a non-genre spectacular. If you root for the underdog, you’ll love this completely enthralling, heartbreaking and inspiring epic.”

Media Pundit: “Stargate Universe brings a fresh look to a relatively young television genre: dark sci-fi.  Battlestar Galactica went there but overreached, being a little too dark for a lot of people … but SGU seems to have found the sweet spot somewhere in the middle.”

WIRED (GeekDad): “Stargate Universe has a rich destiny all its own, and is on a course to achieve it.”

SFX Magazine: “Stargate fans should be proud of it, and it may even pick up a good few converts.  It’s a solid, entering start to a series that certainly has promise.”

The Futon Critic: “Both installments provided for review (the two-hour premiere and the subsequent episode) contain a major morality play that pushes our heroes to make huge ethical decisions. … And like all great morality plays, these developments expose raw — and sometimes surprising — emotions from the characters.”

io9: “Past Gates were as familiar as a warm blanket, and we loved them for that.  SGU attempts to rip that old blanket off and light it it on fire right in front of your face.  So Stargate purists beware: the new SGU may be a bitter pill for you to swallow.”

(Thanks to everyone who has sent in one of these links!)

Sorry I hate that show after seeing the first 2 parts it thats not SciFi it was a cheap knock off of Star Trek Voyager meets Battlestar Galactica plus Lost.

Wonderfully original, but deeply rooted in Stargate mythos. I saw it as refreshing and extremely well done.

Arnoldrimmer, Voyager and BSG are really just space knockoffs of “The Odyssey” — does that make them any less unique? Let SGU find its voice before you so easily dismiss it.

BeckyK we will see!! dont forget some of us Trekkies/Fiver love a good SciFI story and not a Story about “emotions from the characters” and SciFi-Story is just the Carrier as it was with BSG.

I watched the launch with high hopes for a stellar Stargate experience. So far my opinion lies somewhere between “okay” and “meh”.

It does have some potential, and there were some really cool moments in the first two parts, but it doesn’t take a genius to know that three seasons will probably be the most this one makes. I’ll stay tuned to see where it goes and where it ends up. Hopefully, this won’t be the nail in the Stargate coffin everybody thinks it will be.

I am speacheless. GateWorld please get us some nice WALLPAPERS with the ship :D i would really like to have Destiny on my screen as a wallpaper looks to nice.

I agree with the Chicago Tribune.

While not blown away, it definitely deserves a chance to fully spin up. I think there’s great potential here. My biggest problem is with the tie in to previous gates. Why didn’t the hammond do more? Was it not fully functional? The beam weapons should have been able to obliterate the Hataks in orbit. So I would say future tie ins (if any) need to hold true to the storylines thus far.

There are lots more reviews all gathered at this thread: http://forum.gateworld.net/showthread.php?t=68885

I kept getting interrupted while watching it. However initially I thought they had some interesting ideas, even if they were borrowed. I was hoping it wouldn’t be dark or soap opera-ee, or even like Battlestar Galactica. I was actually curious about Robert Carlyle’s character and that is what made me interested in watching SGU. I’ll give it alittle while longer because obviously and hopefully the writers will get all those characters to “bond” and grow on us. I really wish TV would give us some romance nowadays. And be family friendly. I wasn’t expecting it to be like my favorites,… Read more »

I thought it was ok. Would’ve much preferred to see a new episode of Atlantis though. Will give it a chance anyway, reminds me a lot of voyager.

10 reasons Why Stargate universe sucks SGU sucked so bad Gateworld is now screening critics and Syfy even turned off new account activation so I am now posting this all over the web. 1. Wrong name – should have called it “Lost Battlegate Atlantica’s Anatomy Voyager”. 2. Confusing – Scrambled the sequence with unnecessary flashbacks and cause confusion, this only works if there is a big mystery, not the 15 minutes tiny mystery in SGU (Trying to copy Lost) 3. Lacks originality – Tried too hard to please everyone and ended up being a pile of nothing. As if the… Read more »

6. Boring – Characters don’t stick, because they’re all average clueless brain damaged amateurs and a loud mouth, everyone hates loud mouths. 7. Shaky cameras – Dude, stay the **** still. 8. Careless – With plot holes the size of Texas. 9. Too greedy – Crossed the fine line between bravery and stupidity, introducing new stuff to reach wider audience is understandable, ditching everything that was good and piss off loyal fans to the brand itself is just plain stupid. 10. Bad acting – Soulless characters, cardboard acting, but what can you expect from a pilot with a lame script.… Read more »

HELL YEAH!! I AGREE WITH THE DUDE WHO WROTE THE COMMENT ABOVE!!! AMEN BROTHA!! YOU SAID IT ALL!!!

I have seen every episode of Stargate multiple times, but after four episodes of SGU, I find it to be the worst opening to a show in a long time. If it wasn’t for the presence of a space ship, I would swear I was watching “The Days of Our Lives”. All I can say is this show may be about the characters more as they were trying to sell it, but it is WAY to overly dramatic. Dr. Rush is just ridiculous. All the screaming, ranting and growling at everyone is really just getting old already. Stargate Universe is… Read more »

Oh and lose the freakin’ Shaky camera, it’s giving me a headache.

Wow, this is surreal. Stargate: Universe is the kind of show that Episode 200 mocked about. There is a particular quote at the end of that very episode that I rather enjoy: Science fiction is an existential metaphor that allows us to tell stories about the human condition. Isaac Asimov once said, “Individual science fiction stories may seem as trivial as ever to the blinded critics and philosophers of today, but the core of science fiction, its essence, has become crucial to our salvation, if we are to be saved at all.” However, SGU seems to have forgotten that entirely.… Read more »

I thoroughly enjoyed the original Stargate SG1 and even more so Atlantis.

As for Stargate Universe, well I have to say it really sucks. It’s boring and unoriginal. Either beef it up or scrap it before it’s too late

Stargate Universe is a disgusting show of homo-sexual, adulteress, fornicating, and immoral acts. It should be canceled and prevented from airing again.

Come on guys this show isn’t that bad. It’s got some good… who am I kidding, this show sucks big time. I hate it with every fiber of my being. It should be canceled immediately. What in the world was Scifi thinking. Everyone involed in this poor excuse for Stargate should be fired. If they can’t come up with a decent Stargate, don’t dishonor the name. Leave it alone.