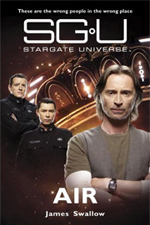 The first title in the new Stargate Universe novel series is out now!  Fandemonium is kicking off the SGU line with the novelization of “Air,” the 3-hour premiere of the show that aired last month.

Here’s how the publisher describes the story:

Without food, supplies, or a way home, Colonel Everett Young finds himself in charge of a mission that has gone wrong before it has even begun. Stranded and alone on the far side of the universe,the mismatched team of scientists, technicians, and military personnel have only one objective: staying alive.

As personalities clash and desperation takes hold, salvation lies in the hands of Dr. Nicholas Rush, the man responsible for their plight, a man with an agenda of his own …

Stargate Universe is the gritty new spin-off of the hit TV shows Stargate SG-1 and Stargate Atlantis. Working from the original screenplay, award-winning author James Swallow has combined the three pilot episodes into this thrilling full-length novel which includes deleted scenes and dialog, making it a must-read for all Stargate fans.

Look for Air at major booksellers in the U.S. and U.K. in the weeks to come, or order it now at Amazon.com

(currently still waiting for availability) and support GateWorld with your purchase!

Meh. It was a good enough episode, but I seriously doubt I’d be able to sit down and read a novel form of it. That being said I haven’t read ANY of the Stargate books put out to date.

I’m hoping the show gets better. I never got into reading the SG1 books, but I have been reading some of the SGA books. I also hope the books should be good, as seen from someone else’s eyes. I will check out these books too.

I think the series is great, but not sure I’d want to read a novelization of an episode or episodes I’ve seen either. Were it a new story – that would be something else.

Uhm… the cover looks pretty, but I’m not that into reading a book about an ep (no matter how amazing) I’ve seen. It’s just… no, thank you.

I actually liked the novelization of “Rising” since a novel puts another dimension to the character. You can show what they think and feel in a different way. However, since I am not particularly fond of SGU so far, I will skip this one.
However, I can recommend the other books that are out there. Most of them are good and well written.

Dunno why Telford is on the front. Eli should take his place.