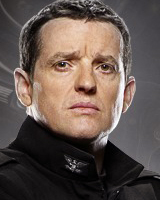 Brand new info has surfaced for “Justice,” the tenth and final episode of Stargate Universe in 2009!  The episode will serve as the show’s mid-season finale.

Colonel Young cedes command to Camile Wray after a crew member is found dead from a gunshot wound and the gun is recovered from Young’s quarters. Meanwhile, a planet harbors a secret that threatens the Destiny.

And from U.K. broadcaster Sky1:

Shockwaves ripple when a member of the crew is killed, and Colonel Young finds himself in the frame. Meanwhile, Rush gains access to the Ancient interface.

Written by Alan McCullough and directed by William Waring, the episode was originally intended to be the ninth episode of the season — followed by the traditional mid-season two-parter, “Space” and “Divided.” When the episodes “Darkness” and “Light” were split from a single episode into two, “Justice” entered the mid-season finale slot.

The two-parter will kick off the second half of the 20-episode season when SGU returns, most likely in late March or early April.

Meanwhile, Syfy is offering viewers a chance to catch up on the entire first half of the season with a 10-episode marathon on Christmas Day (8:30 a.m. to 6:30 p.m., Eastern and Pacific time).

“Justice” will premiere on Friday, December 4 on Syfy Channel in the U.S. and SPACE in Canada, and on Tuesday, December 8 on Sky1 in the United Kingdom.  Learn more in GateWorld’s Season One episode guide! 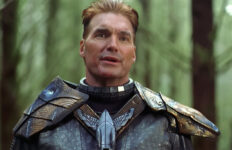 Sounds good, however i really think the show needs to be carefull of how many crew members they kill. After all there was not that many to start with.

dreadtech: Actually they had close to about 90 people in total that gated to the Destiny. So they still have plenty of people they can kill off or otherwise sacrifice :P

I get truly pissed that a brand new show is cut down to 10 episodes so they can stretch it way into next year. This time I don’t think as many people will come back later. This may have worked before with shows that worked but SGU is still working hard to get a permanent audience. Since SYFY lost the British shows what the hell are we going to watch; “V”?

SG-1 and SGA did the same thing. What makes SGU any different?

@flmatthew its common for a lot of shows to have a mid-season break but in almost all cases it does nothing except piss the fans off.

And don’t think its wise to do so in the case of SGU. It was said that the next 3 are the best of the first 10, if there’s truth in that then we shouldn’t have a problem.

Hold up , yeah some seasons were split in half, and by about 6 mths each or longer sometimes. but thats when they ran like 22 eps a season, & canda or the uk would pass them by in being the first to air the newest episodes. but toward the end of atlantis , a few seasons of like bsg & flash gordon i think were aired full way thru with only maybe a week or 2 streches missing episodes for like holiday weekends etc.

A marathon on Christmas? I know not everyone observes the holiday for its religious elements but still many people take advantage of it to visit family. I can understand putting a marathon of something on Christmas as viewership WILL be low but a new show? In regards to the mid season split: SciFi (Now SyFy) has always done this, particularly since they took over SG-1. Personally I wouldn’t mind it if they included more episodes in the whole season, given that there is a huge gap between the two halves but one would think that a new serise would be… Read more »

The US Senator was also killed, which makes four :)

I also don’t like how they’ve split the seasons up so far apart. 1-2 months, I could understand – but more than that is just plain annoying.

They may have done it in the past with other shows, but that doesn’t mean they have to continue doing it.

Well, they better have a good cliff hanger to get me to continue watching next year. What next – the toilet backs up and Destiny needs to stop at the nearest Home Depot? Come on, get the story going, please before this show gets cancelled.

@bobcat
They do have a great story going IMO. As exciting as it is currently I doubt the show will be canned.

SGU return between march and April that out of question! it will be risky cancellation show! if show is cancellation then i will never forgive them for get show cancellation

okay so i’m not really liking the idea of the mid-season split. and also…i’m pretty sure the new murder will only make 2 that have really died. the senator died to save them, the one that was shot later on mentions being shot..he was only wounded, and the one attacked by the alien things was not killed, only badly wounded. they said he would make it, i don’t remember him dying….