Industry critics and expectant fans have long wondered whether Stargate Worlds will ever see the light of day, or whether the ambitious title would go the way of the failed Stargate SG-1: The Alliance.  The studio has faced severe cutbacks, layoffs, and difficulties making payroll over the last year, with even Stargate executive producer Brad Wright expressing concern last spring that the game may never be completed (story) — prompting Firesky / Cheyenne Mountain to fire back with a rebuttal that, despite its lack of communication with the public, work on the game was still progressing.

Familiar confines in Stargate Resistance include the S.G.C.

As a brand new company with no product on store shelves to generate income, Firesky has had to support years of development through private investors.

So why release Stargate Resistance now, when the studio is still working on the long, long-term project Stargate Worlds?  The MMO was once upon a time forecast for a 2008 release, and now has no end to the development process in site — or at least not made public yet.

“Cheyenne had a top team developing a persistent online shooter when the economy went belly up, and our funding dried up,” Resistance producer Kathryn Dutchin told GateWorld. ” Since Worlds, at that time, was at its peak burn, and very expensive, and we were also facing some of our toughest technical challenges with that title, to make it robust and ready for market, it became impossible to sustain the team, and other studios as well.”

The shooter was a secret side-project, in other words, which had to be shelved in favor of Stargate Worlds when the studio lost much of its funding.

But because SGR is not as enormous a project as the MMO, it could be finished and sent into the market more quickly — resulting in a much-needed revenue stream in an industry taxed by the global economic crisis.

“Since we are privately funded, our investment group felt very strongly that a title be released within a short time frame,” Dutchin said.  “But with funding dropped so low, there was no way at that time to finish Stargate Worlds within that time frame, in any capacity that would serve the fans and the game well.  So, building and releasing Stargate Resistance became the best option for Cheyenne, and its investors, to ride out the economic wave, and keep Stargate Worlds on the top tier it deserves.

There's plenty of smoke and gunfire for everyone in SGR.

“Over the last months working on Resistance, the team has had enormous fun, and we’re very excited about this title.  I know all teams say that … but you should come visit us at play-test time!  We’re no less anxious to finish Worlds, but this title has been a blast, and we’re excited to see it becoming ready to ship.”

Visit StargateResistance.com now, and check out the game’s official FAQ to get more of your nagging questions about Stargate Resistance answered.  While we wait for 2010 and the first video game to be released for the 12-year-old television franchise, stay tuned to GateWorld for more from Firesky in the days to come!

(Extra-big thanks to Aaron for the tip!) 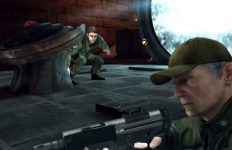 Thanks for the nod to me at the end mate.

I’m rapidly losing hope for a Stargate console game. It wouldn’t even be that hard, just scale down the Mass Effect or Oblivion engines and you’ve got gold. In fact, every time I play those games, I imagine how amazing it would be if set in the Stargate Universe. I’ll even take an XBL shooter, I don’t care. I just want a zat in my hand and a wraith to shoot with it.

Im still holding out hope for a console game. Hopefully if Resistance and Worlds are a success it may push them to developing one. Still this sounds awesome and I will definitely be signing up to play.

YAY. A game that’s not a stupid MMORPG. Isn’t that nice :)

Id be happy just to have a proper game related to Stargate tbh.

Is this vaporware, too? I mean, how long has Worlds been in development but not (seemingly) getting anywhere?

I’d love to see a Stargate game, but I’m not going to play an MMO or console game. In fact when Shelter comes out I’m going to make my own Stargate mods for it.

I think the problem is this, Stargate SG-1: Alliance was a standard game and despite problems between the publisher & developer is the type of game that needs to be developed. Stargate Worlds is an MMO, that’s not cheap. That is hugely more costly. It just wasn’t the right move. Stargate Resistance? No co-op? Sorry, but this just seems like a way to get some money for technology created during the production of Stargate Worlds. While not a bad idea, it doesn’t really help with it being competitive modes and not adventure campaigns. I really, really, really want a Stargate… Read more »

Interesting move, makes sense, they need to get some sort of return on the money sunk into the studio.
Sounds a bit like Star Wars: Battlefront, hopefully it be as good as that was.
I really am getting over the whole MMO games, I want a good solid storyline that makes me feel like I am actively changing the world around me. MMo’s just don’t do that, (aside from the occasional ‘shard’ or whatever you want to call it)
This is a step in the right direction.

Fact: Gaming PCs are light years ahead of a consoule and always will be.
Fact: I’m excited for this game! But also wants Stargate Worlds!!

Sounds interesting, but come on … there are a LOT of Mac users here.

Until I’m actually pulling out my credit card to buy this, I won’t believe it. By this point I’m too jaded to believe any Stargate game will ever be released.

Glad they made this. I would never have bought SGW as it’s a MMORPG… ugh. But, this is nice, isn’t it :) Highly looking forward to it. Although a 1st-person pov would be nice…

Finally a Star Gate game that has some potential. FPSs FTW, and seriously what kind of ##### decided that they should release an MMO as their first game?

PC gaming ROCKS!!!!!!!! i dont know what you guys are talking about. consoles are so backwards, especially considering how quickly technology changes over the years. this wouldve been way more awesome if only it were FPS, which fits PC much better. a COD MW2 style Stargate or something wouldve been ace.

this game looks rushed though and graphics look really bad, looks like a N64 game to me, like goldeneye in fact. i bet you can play it on any laptop. my advise to the developers, game needs to be more flasher and characters shouldnt look like puppets. but at least we get something. im desperate. what i fear is that, after getting it, no one would show in the lobby or whatever server thing, this happens with not so popular games after awhile. you wont have anyone to play with.

An online third person shooter is just an mmo with everything that I find interesting sucked out. All combat, no story just isn’t that fun, no matter how many cool weapons they give you. I agree with the poster above that they needed to make some money with what they had developed and went with this. It will probably please the more combat oriented people, but for those who want a good story, not so much. I prefer that combat, however important, be a means to an end, not the entire game. Now, if they’d made a first or third… Read more »

Whoop! Looking forward to this! Definitely a must-buy for me!

I don’t really want this but damn do I still want SG-1 The Alliance.

PC only? Well lot of consoles here but PC gamerigs to. I ‘am ready. Still miss SG1 The alliance. Coöp a more focused FPS sG shooter. Perception vs Jowood! But this game sound a bit cheap. A fast cash in project. I had my stargate FPS fun with DoD stargate mod. So now we get a retail full game. And have no problem with a FPSRPG but MMO is a nogo. Stargate is Aktion that FPS and character orented so RPG. And mission based so lineair. That where the franchis convert to from vid to game. A semi lineair free… Read more »

Yaey!! Finally a game on the horizon. (again)
This is gonna be sweet even though I’m not really into shooters and am still more looking forward to Stargate Worlds.
All hail Firesky!!

Well it’s a quick way to make money in tech they already made but that doesn’t mean it’s not smart. I will be playing it :)

Also on an unrelated topic did anyone see the dell commercial where they are showing off the graphics of their new laptop? lol wonder how much mgm paid for that little showcase of SGU.

A little disappointed that we only get SGC and Goauld. Of course, they have to save Wraith, Tokra, Asgard, Ancients, etc. for expansion packs.

So, its a stargate version of Team Fortress 2, without the cartoony characters?

Would’ve been better to play SGW first though. Its too bad thats its also a PC exclusive. It would’ve been great as a Xbox Live Arcade title aswell.

Awesome news. But I will only believe it, when I see it in stores. (Thinking back on the cancelation of Stargate the Aliance)

I don’t think they would have come forward with this news now if they weren’t sure about it being released. There has been a long period of silence on the SGW front and I see no reason to break the silence otherwise.

I’m excited that a Stargate game might finally get to see store shelves – but I would rather it be something that doesn’t require an Internet connection. There are still people out there without high-speed Internet!

yeah right… to be released in 2025. I’ve lost all hope for this company, I mean seriously 6 months between 2 line updates? Yeah… They’re on the ball. I don’t care how bad the economy is, the hosting was obviously paid for, how much does it cost to have someone login once a week and toss out an update (i.e. Hey! we’re working on trees this week!).

I doubt I’ll buy this game (or worlds when it is released in 3020) just based on principle at this point.

Stargate games hasn’t had a good run so far. They nearly made a game called “Alliance”, then that go canned when it was 75%ish finished. “Worlds” was then suspended because of lack of funds. I hope there isn’t a curse on Stargate games as I really like the “Resistance” game idea.

“Cheyenne had a top team developing a persistent online shooter when the economy went belly up, and our funding dried up,” Resistance producer Kathryn Dutchin told GateWorld. ” I see the BS is still flying out of CME. This FPS is nothing more than all the work they on SGW’s just slightly modified, maybe. I’d tell you to compare screen shots from the resistance website to the worlds website and you’ll notice the same exact locations and graphics, but the worlds website is apparently no longer there. 5 years and over $50 and all they have to show for it… Read more »