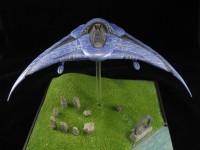 Quantum Mechanix has begun taking preorders for the Goa’uld Death Glider, the newest addition to its line of Stargate collectibles!  The scale replica is expected to ship on March 10.

The screen-accurate (created using the digital models from SG-1‘s own visual effects team) Death Glider replica has a wing span measuring 8 inches. The ship is cast in polystone, with detailed relief carvings on the wings and body.

The diorama base is molded in resin, and features a miniature Stargate, D.H.D. and stone circle a la the planet Chulak.

There are 1,500 individually numbered and hand painted replicas being produced.  It carries a price tag of $99.95, and is accompanied by a ship spec sheet and certificate of authenticity.

You can also order at Entertainment Earth (currently asking $83.99) and support GateWorld with your purchase.

Preorder now from Quantum Mechanix!  In related news, fans who register at StargateResistance.com — the official site for the upcoming Stargate video game — can enter to win a QMx prize package including the Death Glider, last year’s X-302 fighter, and more. Check it out!

ya i have had this on pre-order for the last 4-5 months, i was suppose to have it by christmass, its getting annoying at this point

willoc, did you contact them? tell them they f’ed up.

the date is just constantly being put back, ive ordered it through entertainment earth, so this article says theyll be shipping in march, its annoying but i know ill get it,

Funny, I got an email from Entertainment Earth 1 hour ago, saying “Estimated Release Date is February 2010”.
Looks like my friend’s late 21st gift is going to be even later…