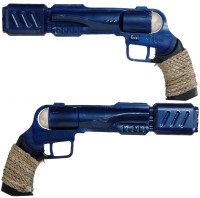 The fourth week of the Stargate props, costumes and set dec auctions is well underway! This week 104 individual lots have been listed by Propworx, the company bringing this series of Stargate auction sales to life.

Among the auctions are costumes from Stargate: Continuum, patches, sketches from the first season of SG-1, and a karate costume! Let’s take a closer look at some of the items presently available.

Ronon’s Stunt Blaster
Rubber stunt version of Ronon Dex’s famous blaster weapon. Includes woven “Wraith hair” around the hand grip, signifying this version as Ronon’s weapon. The Traveler blasters, which were the same design, did not include Wraith hair.

Cassandra’s Goa’uld Bomb Concept Art
Two original pieces of concept art from the Stargate SG-1 Season One episode, “Singularity,” including a detailed drawing of Cassandra’s Goa’uld bomb, as well as its placement in her chest. Cassandra became a vital character to the tapestry of Samantha Carter and Janet Fraiser.

Wormhole X-Treme Blaster
Blaster wielded by a member of the Wormhole X-Treme cast in the Stargate SG-1 Season Five episode, “Wormhole X-Treme!” The 100th episode of the series featured the return of Willie Garson as Martin Lloyd, who had profited in the TV industry by selling a TV show idea based on the SG-1 team.

Kolya’s Pocket Telescope
Telescope used by actor Robert Davi as “Acastus Kolya” in the Stargate Atlantis Season One episode, “The Brotherhood,” While the Atlantis expedition searches for the location of the Quindosim ZPM, Kolya and his men spy on the team from a distance.

200th Episode Starship Pin
Earth symbol made to resemble a Starfleet insignia, used in the “Star Trek” spoof sketch from the Stargate SG-1 200th episode. In the scene, SG-1 takes command of a starship bridge and acts out a sketch from this iconic show.

Satedan Soldier Armored Costume
Armored shoulder pads, chestplate, belt, blouse and trousers, worn by a member of the Satedan military in the Stargate Atlantis episodes “Runner” and “Sateda”. The Satedans were all but wiped out when the Wraith attacked their planet more than a decade ago. The soldiers fought valiantly, giving their lives for some of their people to escape to other worlds. Flashbacks into Ronon Dex’s past give us a glimpse into the lives of these warriors.

Wraith Stunner with Working Lights
Light-up stunner pistol used by both Wraith and humans in the production of Stargate Atlantis. These pistols were introduced in Season Two of Atlantis as an alternative to the unwieldy stunner rifle.

Tollan Guard Armor
Armored jacket and gauntlets with one Tollan wrist device, worn by a background actor in the role of a Tollan Guard in the Stargate SG-1 Season Five episode, “Between Two Fires”. This episode marked the Tollan’s fourth and final appearance on SG-1, as they were believed destroyed by Anubis’s powerful mothership.

Atlantis GDO Mark 2
“Garage Door Opener” used to deactivate the Atlantis shield, used throughout the production of Stargate Atlantis. Pegasus Galaxy GDOs were far more compact than their Mark One counterparts from the Milky Way Galaxy.

Jaffa Tattoo Set
A set of three production made Jaffa tattoos including Apophis, Anubis and Khonsu. Tattoos were applied to the foreheads of Jaffa actors to distinguish the god whom they were born to serve. Apophis was the most common tattoo on Stargate SG-1, as he was the chief villain for the first five seasons of the series. Anubis was introduced in mid Season Five, and Khonsu, an undercover Tok’ra, was featured in Season Six’s “The Other Guys.”

Last week’s auction ended with some surprising, and unsurprising, results. A beautiful dog bone shaped Atlantis wall light was at the top of the list, selling for $1,525. Following was a Daniel Office Artifact (a grey cube) which went for $1,225. An Asuran Replicator Pistol then sold for $1,136.11.

At the bottom of the auction line-up was Dr. Poole’s costume from “Outcast” which fetched $22.50, a Russian ID badge which sold for $37.94, and original concept art for a Tok’ra crate containing atoneik armbands at $39. Never let it be said that these auctions don’t allow fans from all price ranges to take home a piece of history.

The above items, and almost a hundred others, are on sale now through Sunday night! Follow this link to see the Propworx auction line-up, and be sure to check out StargateArtifacts.com for more!