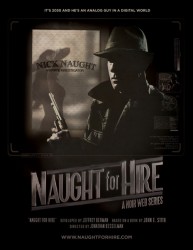 The show will have the feel of old school style detective stories, and will consist of 13 six-minute episodes.  The show is set about 20 years from now in a world where humans and artificial intelligence objects such as cars and answering machines live at peace with one another.

The Web-based series  will also star Juliet Landau, who played Drusilla in both Buffy the Vampire Slayer and its spin-off, Angel.

Naught for Hire goes into production this summer and is planned to premiere online in December. Check out the official Web site at NaughtForHire.com, and stay tuned to GateWorld for more on Naught For Hire as info becomes available! (And click on the poster image above to see a larger version.)

(Thanks to Morjana and Tanith for the tip)

Julian Landau Brown is a GateWorld contributor and a former writer for Lunch.com. He lives in the Philadelphia area with his wife and fellow Stargate fan, Karyn.

Hmm, if this does well, and has the same effect Sanctuary did, I sense a Syfy pick up. Whether it will have ‘success’, we’ll have to see.

orion i was about to say it sounds like the origin of sanctuary.

I can’t wait! Thanks GateWorld for the news!

Yeah Ben! Glad he got something after stargate. I wonder what would happen to his, Going Homer project and what about the one where he is an afghan vet? Nonetheless, happy he got something that would work out like sanctuary.

Good for Ben! This looks like something that could turn out amazing. And a Ben Browder/David Hayter combo should, if nothing else, at least provide for some… interesting results. And hopefully a Metal Gear Solid reference.

Hey, good for him! Looking forward to it. :)

Hayter and Browder, am in.

Sounds like Under A Killing Moon with Browder as Tex Murphy. I’ll watch.