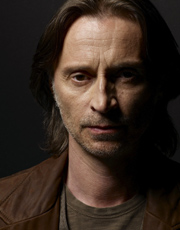 As if you needed more proof that Robert Carlyle is awesome, the Stargate Universe actor is lending his voice to Castlevania: Lord of Shadows, the latest entry in the longrunning video game series from Konami.

Carlyle voices Gabriel, the game’s main character, in the new installment due later this year. In the story “Gabriel is a member of the Brotherhood of Light, an elite group of holy knights who protect and defend the innocent against the supernatural,” according to the official game description. “His beloved wife was brutally murdered by the evil forces of darkness and her soul trapped for eternity. Neither living nor dead she realizes the horrific truth of what is at stake and guides Gabriel to his destiny — and hopefully salvation for the world… but at what cost?”

Alongside the actor — who plays Dr. Nicholas Rush on SGU — is Star Trek‘s Patrick Stewart. Hear both men in the game trailer:

Castlevania: Lord of Shadows will be available on the Xbox 360 and Playstation 3. Visit the official Web site at Konami.com.

(Thanks to Patrick for the tip!)

…You’ve only just heard this?

@bellboy
I bet there are still lots of people out there who don’t know it. Especially those who don’t play video games might find it interesting but still don’t know it yet.

The later Castlevania games just copied Super Metroid which was quite possibly the greatest game ever made. Therefore, Metroid > Castlevania

Just look at any shot of Rush. He’s already a Belmont. IN SPACE. Just without a whip.

Is there anything RC can’t do? :D

That’s news to me thanks. Carlyle has an awesome voice to say the least.