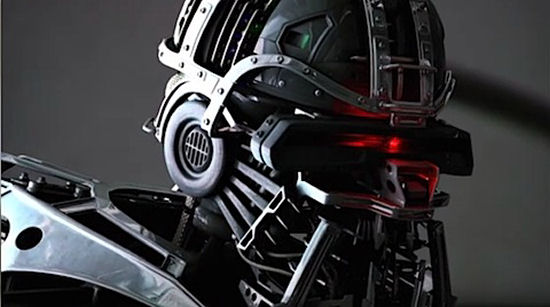 Syfy is switching up its game plan and bringing back Caprica early, pairing the Battlestar Galactica prequel drama with Stargate Universe.

The second half of Caprica‘s first season will premiere on Tuesday, October 5, airing at 10 p.m. — following new episodes of SGU‘s second season.  (SGU starts on September 28.)  The network originally announced a January return for the series, fully one year after the season started.

It’s something of a reunion for the two franchises, since Syfy split up the perfect night of sci-fi it had going with Stargate SG-1, Stargate Atlantis, and Battlestar Galactica.  Syfy decided to take a shot with its original series on one of television’s most competitive nights after it acquired the rights to Friday Night Smackdown, keeping that show on Friday nights, where its fanbase expects to find it.

The move will push Sanctuary — SGU‘s previous lead-out show, starring and executive produced by Stargate‘s Amanda Tapping — back to Friday nights.  Season Three will now premiere October 15 at 10 p.m., and will follow Smackdown.

Here’s how Syfy teases the rest of Caprica‘s freshman year:

The second half of season one will transport us from stunningly vivid, twisted Virtual realities to the fascinating outer worlds of the 12 Colonies. Along the way, revolutionary tensions rise, family power shifts and our characters grapple with the physical and emotional consequences of their questionable decisions. As the season races towards its stunning conclusion, each episode lays the groundwork for the inevitable (and brutal) clash between the new Cylon race and its human creators.

What do you think of the move?  Will you follow SGU and Caprica to Tuesdays?  Will you stick with Sanctuary after pro wrestling?

to bad, I would rather have Sanctuary after SGU. :(

I love SGU, but there’s no way it’s going to compete with Glee.

Sadness! that means waiting 2+ more weeks to find out what happens on Sanctuary! :(

Darn, now there are two shows I won’t be watching on Tuesdays…. never could get in to Caprica. But on the bright side, my Fridays are looking up a bit! :)
On a ratings note, I’m not sure, but didn’t Sanctuary get better ratings than Caprica? So wouldn’t it have been better for SGU to be paired with a higher rated show? I just wonder what the thinking is behind this decision?

@Sylvia
Yes I think Sanctuary got better ratings than Caprica. I don’t know the number but I remember reading Caprica ratings were very low. I hope this doesn’t hurt Sanctuary or SGU. Don’t care about Caprica.

“On a ratings note, I’m not sure, but didn’t Sanctuary get better ratings than Caprica?”

Live + SD ratings of season 1.0 of Caprica in million viewers:

I don’t know all live + SD ratings of season 2 of Sanctuary. But those are the episodes and ratings I know of:

Looking at those numbers, I think Sanctuary would have been a better pairing to attract more people to Tuesday nights. I did read on the TV ByTheNumbers site that people are speculating that the actors contracts are coming due in October and they need to know by then whether there will be a renewal of the series or not. So showing the eps now will give them the answer as to whether there will be a Season 2 of Caprica. Also Ron Moore has another contract with Sony. Would be interesting to be a fly on the wall at some… Read more »

This sucks. I follow (and love!) all 3 shows and would prefer to have them all together in one line-up. SGU/Sanctuary/Caprica Tuesdays would be a nice continuation of SG-1/SGA/BSG Fridays. And as happy as I am to get Caprica much sooner, I don’t understand the decision to split SGU and Sanctuary at all. Why couldn’t they leave Caprica for Fridays? Stargate and Sanctuary airing together became another tradition I was very fond of. But most of all, I’m afraid that it will hurt SGU and/or Sanctuary. Being the sole sci-fi show on a Friday night after that Smackdown thing can’t… Read more »

@BPStoyle: Glee at 8pm, then switch over to Syfy for SGU at 9!

Wrestling will probably get a lot of viewers and most of them are men, which usually watch science fiction series more than women. I think some wrestling fans will watch Sanctuary. Perhaps wrestling can even help Sanctuary. We will see.

Here in Canada, SGU is (fingers crossed and as far as I know) still going to be running on Fridays. Hopefully still preceded by Sanctuary :)

The idea that SGU is going to be next to Caprica gives me hope that there may, one day, be a nice solid sci-fi block on a non-sci-fi channel.

with the possibility of V following No Ordinary Family on ABC in November– it sounds like ABC will have the scifi to watch, merely IMHO of course! ;)

BSG got a similar treatment earlier in its early life, being sent to wednsday then sunday before being put back on friday so im not terrablly concerned about Caprica.

I believe that this only helps SG:U. The press coming from the second half of Caprica is very strong. They fit together a lot better than Sanctuary does, and the promotional power of both shows is higher, regardless of recent ratings. The 2nd half of Caprica honestly looks like a totally different (and better) show. Besides all that, CAN”T WAIT FOR SGU!

Got word from CTV that SPACE is moving Sanctuary: http://www.cinemaspy.com/Television-News/Early-Return-For-Caprica-Smacks-Down-on-Sanctuary/4689
(skim to note at bottom)

I would prefer to have all three shows in a block on the same night. As far as Sanctuary is concerned, we’ll never know when it’s going to start because wrestling(ugh!) ALWAYS runs long.

I’ve managed to get a large group of college students to watch SGU on Friday nights but since it and Caprica will be on Tuesdays, I really don’t think we will be able to keep watching as a group (Tue. night work meetings, homework, etc).

The group viewing was the only thing really keeping me interested in the shows so I guess I’ll find in the DVD section one day.

I would have liked Sanctuary after SGU also, but I am not disappointed that they are putting Caprica. I actually like the show I caught up on it a few weeks ago and it’s pretty good. But I don’t know what it will do to the ratings though, because I have been watching promos for TV shows coming in the fall and there are some pretty good ones that are on Tuesday’s and I don’t know it could be a good thing people who don’t watch TV on Friday’s could find these 2 shows and fall in love with them… Read more »

I think pro wresting has no business on the syfy channel it needs to stay on spike tv. It may bring in money to the network but it does not fit with the networks shows at all it’s the odd ball that does not belong. Syfy needs to get rid of it and put other shows in it’s place.