Season Two of Stargate Universe is fast approaching with its premiere in less than two weeks, and to commemorate the occasion, we at GateWorld have been working hard to bring you brand-new interviews with members of the SGU cast we haven’t chatted with previously. The first in our series of new SGU cast interviews is with a woman who is no stranger to the sci-fi genre. For Alaina Huffman, though, stints on series like Painkiller Jane and Smallville were merely precursors to becoming an integral part of the Stargate phenomenon — and a role (as medic Tamara Johansen) she initially embodied while also factoring in her own real-life maternity.

GateWorld sat down with Alaina Huffman for the first time when she appeared at (and yours truly co-hosted) the Minneapolis stop of Creation Entertainment‘s Official Stargate Convention in June of this year. During our exclusive chat with her, Alaina talks about getting her start in the acting profession, her audition process for SGU, the differences between herself and T.J., her favorite highlights from Season One while looking to the future, and more!

GateWorld’s interview with Alaina Huffman runs approximately 13 minutes and is available in audio. It is also transcribed below!

Alaina Huffman You too!

GW: And what are you thinking of your first convention experience with Creation?

AH: It was great! I didn’t know how to get warmed up in the crowd. But now I get it!

GW: Was this your first actual “con” con? Or just the first Creation con?

AH: It’s the first Creation one.

AH: I’ve done Comic-Con. And that was such a process, of course. Because it was SyFy and MGM. Because it was the launch of the show. All that kind of stuff. So it was like … where we were led, we followed. And I just did the London Expo. We did a panel. And doing a panel with Jamil is very different — than anything, ever. [Laughter] 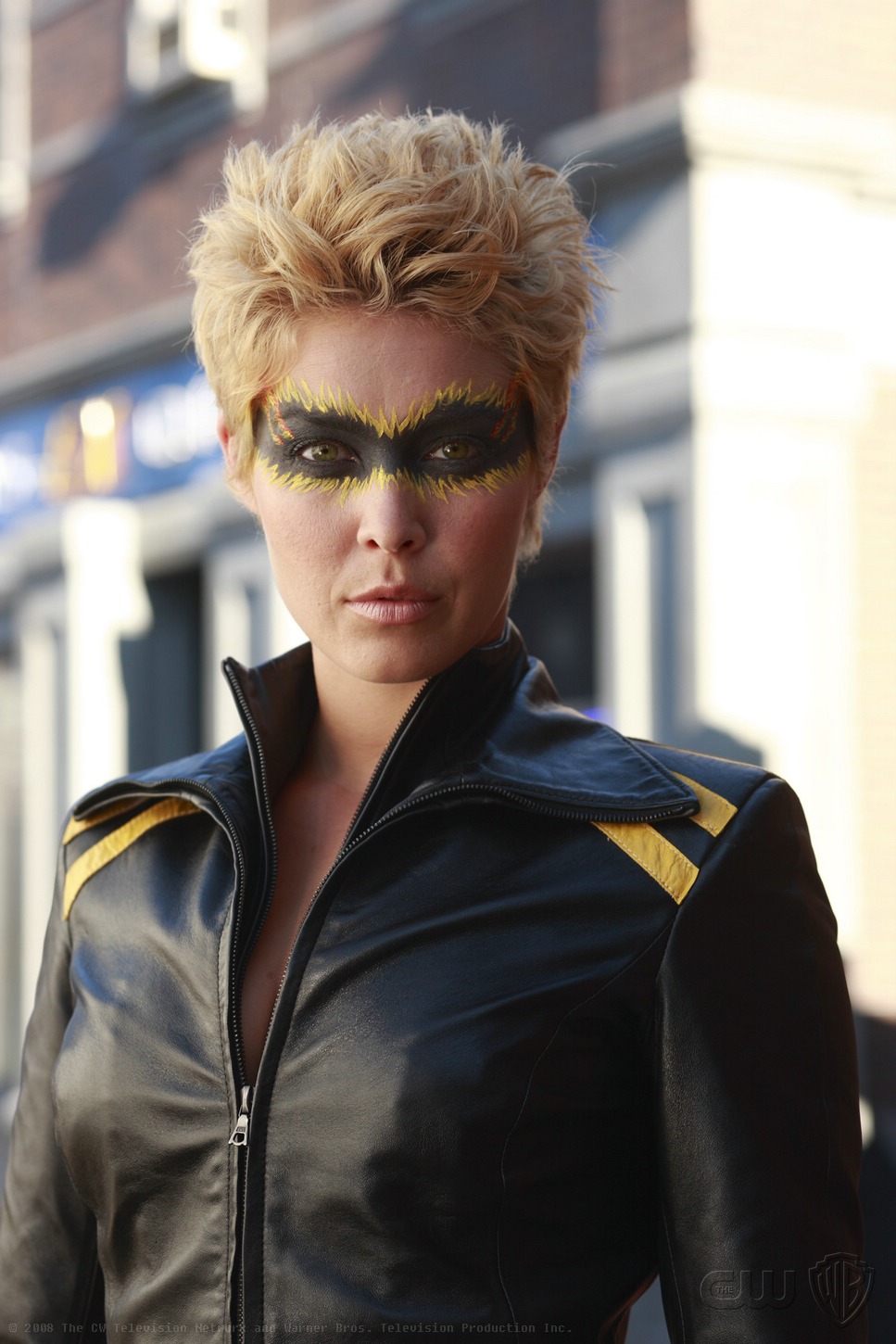 Huffman as "Black Canary" in the series Smallville.

I love Jamil! He’s great! But he’s so off the cuff. He’s the king of random. So, yeah! It was great. I’m looking forward to getting to talk to the fans a little bit more personally.

GW: Since this is the first time we’ve talked, tell us a little bit about how you got started in the industry. I know you did some modeling before you caught the acting bug.

AH: Mm-hmm. I was approached and scouted as a model. That was an interesting career. It took me around the world. I spent a lot of time in Asia, and in Japan and Germany. I had a very successful career. I was really lucky that I worked quite a bit.

And then, moving into acting, I did a slew of indie films. I lived in Texas, and Austin was kind of the hot spot for making indie films at that time — the early 2000’s. And then that took me to L.A. And I’ve been working pretty steadily in television since.

GW: Prior to being cast on SGU, most people probably remember you for the genre work you’ve done on Painkiller Jane and on Smallville. Do you enjoy the sci-fi/fantasy genre yourself?

AH: I wasn’t familiar with it. I mean, [I knew] which sci-fi shows and movies there are …

GW: And Vancouver is such a heavy town for filming of that type of programming.

AH: Yeah! Yeah. I never was an actor living in Canada. So the work that I booked, like Painkiller Jane, Smallville and Stargate … and another show, Tru Calling. I did an episode there. All of them brought me from L.A. So I’m not sure if it’s coincidence or what happened.

But now that I’m familiar with the genre, I love it! Particularly comic books, actually! Because I got into them with “Black Canary.” I did some of my research and I was like “I see why people really like this.” It’s been a fun journey.

GW: Tell us a little bit about your casting as T.J. on SGU, and how that came about. What got that ball rolling initially?

AH: Well, from what I understand, Brad [Wright] and Rob [Cooper] knew who I was. From Painkiller Jane, probably. And also as the Black Canary [on Smallville]. They asked me to come in and audition for T.J., so I did. And this was in October of ‘08. And they said “We really like her. We’re going to test her.” Which is essentially a second audition, but now you’ve nailed down your contractual obligations.

And this was October. And they said they were going to test me in December. So I thought “That’s a ways away! I’ll have another job or something by then.” You never know in the business. I just thought “Oh, that just won’t happen.” And sure enough, December came about and they had me come back in. But they had me come back in for “Chloe.” And I was like “Really? I don’t know about that one.” And they said “Yeah, yeah, yeah! We think you’d be great for Chloe.” So I read for Chloe, and they were like “Uh…no.”
And I said “Yeah, I agree!” [Laughter] 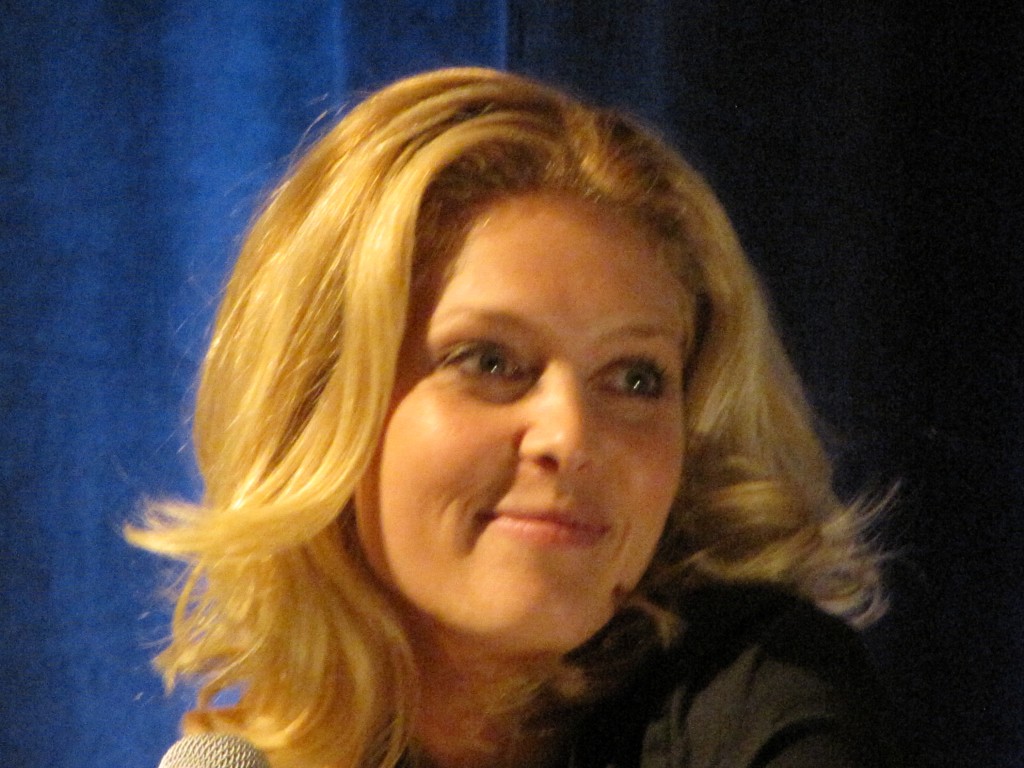 Alaina was a guest at both the Minneapolis and Chicago stops of Creation Entertainment's official conventions.

GW: When I talked with Elyse [Levesque] back in April, she said one of the things they wanted her to do during the whole audtion process was “bring on the waterworks.”

AH: Yeah! The scene was all crying! Which was fine. Essentially, I think the audition scene was the scene from “Earth” with her and Eli in the car. But I think it was rewritten a little bit from the test scene to [what viewers saw] in the episode. So that test, and I had only ever done two before that one, I was there for about four hours.

I was waiting in the room, and it’s an emotional scene. And they were testing by character. So they tested the Young’s and they tested the Greer’s. I met Brian [J. Smith] there. I met David [Blue] there. I saw Elyse, but I didn’t meet her. And usually, they give you a little bit of a warning. Like “Hey, here’s the character we’re going to test next, and here’s the order [you’ll test in].” And they went “Chloe’s next. Alaina, let’s go!” And I went “Ah! I wasn’t ready!” Because I had been waiting for a few hours.

But anyways, I think I was a better fit as Tamara, and I think they saw that as well. And they asked me if I wanted to have that role. And I said yeah!

GW: How similar are T.J. and Alaina? Are there personality traits that you share? Or how are you different?

AH: I find T.J. really vulnerable. I love that she can be both strong and vulnerable. And I think that is her maturing. I think she’s at a certain place in her life and in her career. And in the situation that they are in, I think she is overwhelmed. With her life and her career. They call it a “quarter-life” crisis for a reason. I’ve been there. I can relate to her in a lot of ways. And I draw on my own personal experiences for her.

But I don’t … I’ve learned a lot from her, to be honest with you. I’m more of an independent, “I can do anything and just dare me not to” type. And I think she’s more of a “I can’t do this” and has to prove it to herself.

NEXT: Turning to SGU Season Two