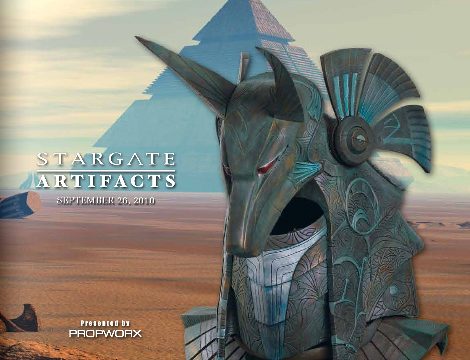 A massive, twice-in-a-lifetime auction (there’s another one coming in 2011) of authentic Stargate props, costumes, and production art is coming to Seattle this weekend (September 25 and 26).

The Experience Music Project Science Fiction Museum in Seattle, Washington will play host to Propworx’s auction of Stargate SG-1 and Stargate Atlantis items, straight out of the warehouse at The Bridge Studios in Vancouver and dressed up for fans to proudly display.

We’ve been telling you about Propworx’s weekly ebay auctions throughout the year, thanks to GateWorld’s own David Read and his day job at Propworx. This weekend David is in Seattle to help conduct the auction of more than 800 unique lots. It’s impossible for us to list all the cool stuff here, but just a few of the major items for sale include: 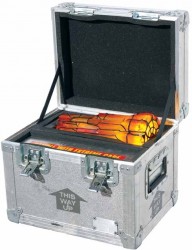 The Z.P.M. is among the lots to be auctioned in Seattle this weekend.

Fans and potential buyers can browse or download a PDF of the full-color catalog online at StargateArtifacts.com, and buy a printed copy of the catalog (pictured above) as a collector’s item in and of itself.  The hardbound volume features more than 500 pages of color photos and product descriptions, plus exclusive interviews and behind-the-scenes photos you won’t see online.  That’s $45.00 with free shipping in the U.S.

And maybe the coolest part of the auction: If you aren’t attending, you’ll still be able to watch a live video stream of the event on Saturday and Sunday (9 a.m. to 6 p.m. PDT)!

Weekly ebay auctions resume October 3, leading up to the second live event early next year.  Stick with GateWorld for the very latest, and tune in to the GateWorld Podcast to hear David’s reports about this historic Stargate event!

if there selling the props including the gates. then surely this means any future movies have been totally shelved. no props means no set to shoot on.

Have you guys said where all the money goes?
Could it go toward making more movies!?!

No, the movies are waiting on funding from MGM and its investors.

Propworx is a private, for-profit company (licensed by MGM), so they get the profits from the auction. MGM obviously gets something, but I’m not sure if it’s a percentage or a flat payment for the goods.

Believe it or not, props can be remade.

remade at a cost! isnt this all bout cost!

mgm should just go ahead and sell the rights to stargate, but put a clause in that brad wright and co have to be on board.

Oh, no. This is about as bad as bad can be. If they’re selling all the stuff like this – including the Stargate, then surely there will be no more movies, at least not SG-1/SGA movies. Goodbye, Stargate. You shall be missed.

This is about as bad as bad can be. If they’re selling all the stuff like this – including the Stargate, then surely there will be no more movies,
﻿

at least not SG-1/SGA movies. Goodbye, Stargate. You shall be missed.