GateWorld: I think for me, it was probably most where I’m like, “Wow, that’s just cool!” — in terms of the dynamic shots virtual sets allow. It was “End of Nights, Part 2” — the shot where Ashley comes in from the ceiling along with the other transformed Abnormals. And the tracking shot literally just followed all of them down.

Martin Wood: And the glass following them down, it was cool.

MW: Yeah, I really liked that. It was actually, a lot of times what happens when as a director you can see the shot, you tend to automatically pull it back a little bit, because you think, “Oh, my brain thinks too big.” In this case, whatever my brain thinks, the visual effects people take it and make it bigger. So, it’s always a thrill when I see those kinds of things.

GW: You directed basically about half the season, half the episodes in Season Two.

GW: And Amanda, you got to direct “Veritas” this past season. How was that and can you compare it to the episode of SG-1 that you did [Season Seven’s “Resurrection”]?

Amanda Tapping: In some ways I felt more pressure on this one, surprisingly. I mean, SG-1 was huge because it was my first one and I had a lot to prove.

GW: Was it different because this one is your baby? 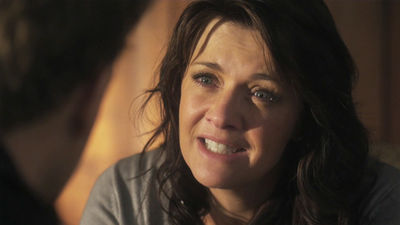 Tapping found her directorial work on the episode ''Veritas'' a bit more challenging than her directing stint on SG-1.

AT: Yeah, and Magnus is just so much more intense and I’m still getting to know her. Where with SG-1 it was Season Seven and I knew Carter really well. So it was challenging. And also Magnus was going slowly insane in the episode … [Laughter]

GW: Martin, above and beyond the virtual sets what challenges are there in directing Sanctuary that you didn’t have when you were working on SG-1 and Atlantis?

MW: One of the biggest challenges for me is having to produce the show at the same time in a much more bigger and hands-on way. There really are only three of us that are able to do the physical work of cutting and posting and then finishing the show. Amanda’s on set all the time, Damian is writing all the time, and I’m directing almost all of the time. If I did every second show, there would be nobody free — literally nobody free — to do cuts, and looking at things, and getting posts, starting into the music.

What we’ve had to do, this year specifically, is try to give ourselves a little bit more room on the days. When Amanda’s not working, where she’s not on set, she goes into working cuts and dealing with music and stuff like that, dealing with all of the producing of the show outside. That’s the biggest thing that’s happened to me. The taking the step beyond directing and at the same time I’m directing.

Technically, as far as directing goes, I wanted to find a new style to make myself a little more scared in Season Two. Just in the last two episodes I found a style that is different for me as a director and changed the way I’m doing things for the past 15 years. I’ve been directing a certain way. I needed to be scared.

GW: Shake away the complacency?

MW: There was no complacency. There’s a tendency when you direct to be able to go into a mode of directing where you find the path that will get you the best storytelling in the shortest period of time within the constraints put on you — like budget and stuff like that. If you do that, you can make a really good career. And I have made a good career out of being able to do that. I’m a good television director in being able to make the days and do it dynamically and still tell the story.

I think what I needed to do at the end of last year was show myself that I could take myself out of the comfort zone of “I know how to do this,” and into “I’m going to try something I don’t know how to do that I want to experiment with.” Really, I say this all the time to people. I go, “Oh man, I really moved outside my comfort zone for [episodes] 12 and 13 last year.” And they go, “Wow, they were good shows … What happened? Where’s the move?”

It was really in the way I was putting the show together. It was a very personal thing for me and not easy to tell someone in an interview, “Well, this is specifically what I did.” It was the way I moved in between shots, the pace I edit at, it’s all those things that changed for me. And it was a scary time at the end of last year. I wasn’t sure until I actually saw the editor’s cut, the editor’s assembly. I wasn’t sure it didn’t suck. But it didn’t! [Laughter]

So I came back at the beginning of this year and said, “OK, I’m going to take where I moved to in 12 and 13 and I’m going to amp that up again.” So, when you see show one from this year it has, as far as I’m concerned, moved me into a different level of how I direct a television show. So that was the challenge, to answer your question. That was the biggest challenge for me to personally challenge myself in a way I’d never been challenged before.

GW: What type of reaction have you had to the split screen, multiple viewpoint approach that you started using at the beginning of last year?

MW: It’s been really good. We’ve had lots of really good responses to it saying it jacks up the way that you can watch something like this. And what’s interesting to me is the only complaint I’ve heard is people who say, “Well, when we download it onto our iPhones, it’s hard to tell what’s going on.” 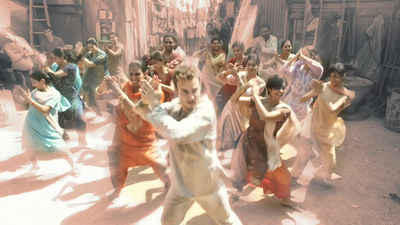 Wood considers the Season Two two-parter ''Kali'' as the beginning of a more challenging directorial style for himself. It's a trend that will continue in Season Three.

GW: The screen is too small …

MW: And the argument was, you started as a Web-based group so you could go multi-platform with this, and now you’re selling out to be able to do big screen. The problem I have is that from day one of doing the webisodes, I always said I’m not working towards the small screen. Because eventually people will be watching this on big screens. You’ve got Apple TV, you’ve got bigger screens you’re watching on …

So, I’m stopping worrying about small screen television and starting working on big screen television and projecting in a bigger format. So my modus operandi is never to work toward a lot of people to watch them on their wristwatches, because all you’re really doing is listening and sort of getting an idea of what’s going on. The amount of work that goes into it, the resolution that we’re using with these cameras, the dynamic visual effects is made so — yeah, if you want to watch it when you’re riding on a subway on your iPhone, great. But I also want you to take a look at it on the big screen because it holds up better than a lot of shows do. Certainly better than a lot of virtual shows do in big screen.

It’s easy to make this show — easy, easy to make this show — for a small screen because then you aren’t spending all the time you are on the details. We’re spending time dealing with detail and that means big screen. So that’s the biggest complaint I had about the multiple screen format — that we use it and by doing so to watch it on a smaller format doesn’t work. Well, I’m sorry.