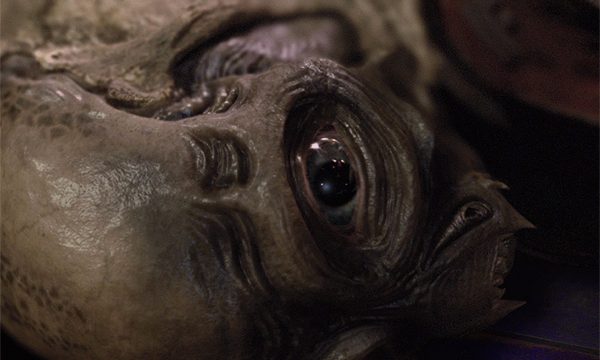 Stargate Universe is back tonight with an episode fans have been looking forward to for a long, long time. “Awakening” promises some major developments in the show’s mythology as the crew of Destiny makes a very big discovery …

Here’s your preview of tonight’s new episode! But beware of some significant spoilers. Turn away now if you don’t want to know anything about that discovery or the episode’s plot.

SGU is now airing on a new night! Tune in Tuesdays at 9 p.m. (8 Central) on Syfy. Watch it live if you can, then head over to GateWorld Forum at 10 o’clock to talk about the episode with us.

And, of course, we’ll be rolling out GateWorld’s coverage all this week! Come back for plot analysis of the episode, high-res screencaps, Omnipedia updates, a complete transcript and summary, and our weekly podcast next Monday.

Destiny docks with a similar ship that is identified as a seeder of Stargates. Lt. Scott boards the vessel with a team and finds that it may have enough power to open a stargate back to Earth.

The crew encounters a ship, similar in ancient design to Destiny, which may provide the means to return to Earth.

The Destiny is set on a collision course with a ship of similar ancient design found floating in space. Panic turns to wonder as the ships dock with each other. With data streaming in they learn they have come upon one of the Stargate seeding ships that the Ancients sent out ahead of the Destiny.

Col. Young dispatches a team to investigate while setting Dr. Rush and Eli to analyze the flood of new data. Once aboard the Seeder Ship, Lt. Scott and his team discover that it might hold the energy to power the Stargate for a connection back to Earth.

Realizing this might be the key to getting home Col. Telford convinces Young to let him join the team aboard the mysterious ship. But just as the energy transfer is underway they discover there’s more aboard the ship than just power.

Catch up with the latest episodes of the series now at Hulu (U.S. only). You can also purchase previous episodes on iTunes or Amazon.com.

“Awakening” airs this Friday on SPACE in Canada and SCI FI in Australia, and 19 October on Sky1 in the U.K.

Just got the MGM email, there are some wicked looking aliens on tonights episode.

I have a great hope for that episode…have to wait till Friday when we get it on fox-tel though. :(

NOTE POTENTAL SPOILERS, DONT READ ME IF YOU HAVENT SEEN ANY OF THE EPISODES FROM THIS SEASON SO FAR. This season has been quite disappointing for me to be honest, mainly with all the missed opportunities for plot developments and the like. Things like 9/10ths of the LA being kicked off the ship to Talford being written out (or at least being put a in a situation where a Dues Ex situation will be needed to bring him back) pretty much right after coming back as a good guy too me feel like missed opportunities. Personally I felt, before the… Read more »

What a good episode. It was so exciting. Many funny scenes, good aliens, good story, i want the next episode, pleaseeee