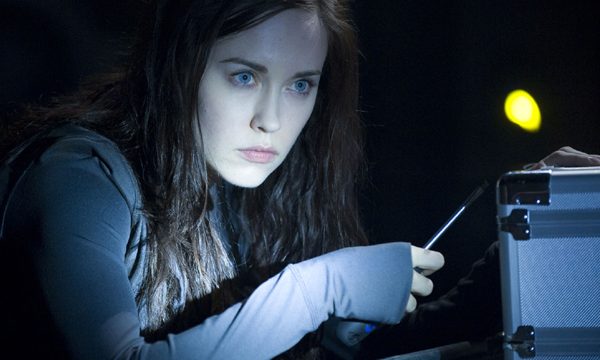 Tune in to Syfy Channel tonight to see a brand new episode of Stargate Universe! “Pathogen” airs at 9 p.m. (8 Central). Watch it live, then point your browser to GateWorld Forum at 10 o’clock to talk about the episode with other fans.

We’ll also be updating the site all week long with the episode’s summary, plot analysis, transcript, Omnipedia updates, and more.

Here’s your preview of tonight’s new episode! As usual, beware of some significant spoilers …

Chloe behaves in a bizarre way, prompting a search of her quarters, where Lt. Scott finds a journal penned in an alien language. Elsewhere, Eli copes with his mother’s medical condition.

Catch up with the latest episodes of the series now at Hulu (U.S. only). You can also purchase previous episodes on iTunes or Amazon.com.

“Pathogen” airs this Friday on SPACE in Canada and SCI FI in Australia, and 26 October on Sky1 in the U.K.

YES! I can’t wait for some more info about the blue guys

Looks like we’ll be seeing more info about the blue aliens. Also, maybe Eli will tell his mom about where he is?? (considering she’s sick) Then again, he might not.
Unfortunately up here in Canada, I have to wait till Friday! Not really thrilled about that, but in a way it works out: I watch a show at 8 anyway, so I will only wait 1 hour before SGU starts where I live.

Where do you guys get the idea that it’s the Smurfs? To me it seems more likely it’s the “Faith” aliens. For one, I don’t think the Smurfs are that advanced. Secondly, the build-up to this episode started in “Intervention”. Thirdly, Chloe’s skin turns grey, not blue. Personally, I hope that she never completely turns into one of the “Faith” aliens. I’d like them to be kept a mystery for a while longer. Well, unless they give it more of a “The Fifth Race” kind of ending. That alone would make it an even better episode than “Awakening”, in my… Read more »

It was so good that I fell asleep…and didn’t go back to finish watching it.

Stargate Dramaverse Why do they force Drama on us? I thought they wanted to give us Sci-fi? This episode was terrible. After almost one and a half seasons the crew aboard Destiny (minus Rush) still doesn’t know there is a bridge/control room? Seriously??? With those stones they have, and all the knowledege they must have on the Ancient tech on Earth, they still didn’t bring in a science team to find the bridge/control room? Seriously??? Folks, we have had a total of 24 episodes. Thats about 24 hours of airtime (including advertisements) for this timeslot, and the crew still hasent… Read more »

I loved this episode because of its human side. Atlantis and Sg1 never had that. I was tired of the same booing things : asgards, replicators, happy campers sga – john sheppard … nothing new. At some point I stopped watching Atlantis because it was too predictable.

@Bogdan C.: Hehe, I think that there are many fans who don’t watch SGU for the same reason: it’s predictable – little suspense, little action, stone-enduced emo scenes with loved ones. So, I guess it goes both ways :P

For me, for example, was one scene where Sheppard just couldn’t get out that he considered Teyla a friend more human than half an episode of ruminating on SGU.

It’s up to every person’s taste.

@katikatnik … Yeah, maybe you are right but, still I dont know what to say. Still, Sgu is not predictable because you wont know whats going to happen next even if its about drama or sci-fi. In Sga it was the same, they went through the gate to find trouble or somebody would have come through the gate to send a warning. It was alwasys the same. It was too Sg1 … I liked Season one and two of Atlantis, but when I saw the replicators … I was a little surprised in a bad way. They could have created… Read more »

@Bogdan C. – How predictable any tv show may be is relative to only how much the viewer is paying attention. I find SGU extremely predictable. I can say the same for pretty much every show I’ve ever watched for more than an episode here or there. Some shows are more elaborate in their plot, obviously, but still predictable. As for the replicators, I’d have been very disappointed if they hadn’t shown back up. We knew the Ancients created them, we knew there were human form replicators and that they had been around for a long time. There had to… Read more »

Chloe had became the sexiest woman on the show I think