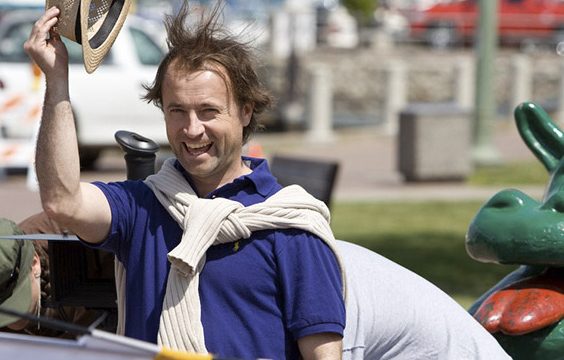 Anyone who has met or talked with David Nykl (Dr. Radek Zelenka on Stargate Atlantis) knows that he’s a nice guy. So what is this “beast” that is lurking inside? It’s quite possibly David’s alter ego, Dr. Paul Moran, a cryptozoologist in the new independent film The Beast of Bottomless Lake (Provost Pictures).

Okay, I’ll admit I am a pretty big Zelenka fan — hence that also makes me a David Nykl fan. Those who watch SGA know that Zelenka usually gets the brunt of many of Rodney McKay’s rather terse rants and insults. So this fan was excited when David Nykl posted on his blog back in May 2007 that he was filming a movie where he was cast in the lead role. No more being second scientist for this time.

Now over three years later, The Beast of Bottomless Lake is complete and making its way around the Canadian film festivals where it has already won several awards, including a Best Feature Film and a People’s Choice Award. I got the opportunity to see the movie at Vcon this past October. While I was a bit worried that my expectations might be too high after following the movie’s progress for so long, I was pleased that the movie exceeded my expectations.

The actual beast in the movie is a mythical creature called Ogopogo, similar to the Loch Ness in Scotland only Ogopogo is located in the Okanagan Lake in British Columbia, Canada. Just like Nessie, no one has ever presented hard evidence that Ogopogo really exists — which is where Dr. Paul Moran and his mismatched research team come in.

OK, at this point if you are expecting a typical scary monster movie, you won’t get that with The Beast of Bottomless Lake. This movie is a comedy. The true beast is Dr. Moran’s obsession with proving that Ogopogo really does exist; although he seems to be motivated more by the $2 million dollar bounty for proving the creature exists than he is by doing any actual scientific research.

With a well placed camera here and there by a camera crew that Dr. Moran brings along to document the adventure, the camera unwittingly captures Dr. Moran’s obsession as he makes one questionable decision after another, while all along alienating himself from his team, his girlfriend, and his family (often to some very hilarious results).

Nykl does a wonderful job of taking this ethically challenged character, weaving intricate layers of emotions throughout the movie.  At times it feels like this character may actually have some redeeming qualities, after all.

Nykl is not the only cast member in this movie to have a Stargate connection. Fabrice Grover, who plays Ernie in the movie, was cast as Amelius, the Alteran who create the ark in the SG-1 movie The Ark of Truth.

This movie is a funny and thought-provoking comedy, an idea by Keith Provost — who died before he could see his idea completed. Kennedy did a wonderful job of making sure his friend’s vision was brought to life, with a wonderful cast which also includes Leanne Jijan-Hume, Kennedy GoodKey, Bronwen Smith, Roger Haskett, Robert Heimbecker, Mark Redky, Melanie Blackwell, Mike Antonakos, Gordon May, and Christina Jastrzembska.

How do you get to see the movie? Right now, Beast is making its way around Canada at film festivals. Kennedy Goodkey (producer and actor) and Craig March (director and actor) are also trying to get connected with sci-fi conventions and other possible outlets to show the movie. If you want to see it, ask for it. Contact Kennedy Goodkey on his blog and give him the details.

They are also looking for a mainstream release, however in this business that is not always easy. At the very least Kennedy guarantees that the movie will come out on a DVD sometime in the future.

And the question that you may be asking yourself right now: Do they actually find Ogopogo? You have to see the movie to find out. It’s a wonderful crafted comedy that, if you can get beyond the laughs, also conveys a deeper, thought-provoking message. It is filmed in some splendidly beautiful scenic areas of Canada.

It’s also a chance to see another Stargate alumni shine in something new and different.

Rosehawk is a GateWorld contributor.

ok, I will admit it the article title made me lol.

Such a funny movie and such an awesome man! David is the best!

Nice to have some SGA news. Good for David.