GateWorld: You did “Morpheus” and “Harmony”. So, relatively recently.

PG: Cheater! [Laughter] Yeah, Andy [Mikita] and Will Waring directed those. So, I have to say that I’ve come to respect it more, because I had no idea how intricate the fanbase was and how deep the broad mythology is of all the shows. It’s embarrassing, I mean, Babylon 5, Andromeda, these are names that, over the last two years, I’ve come to know. 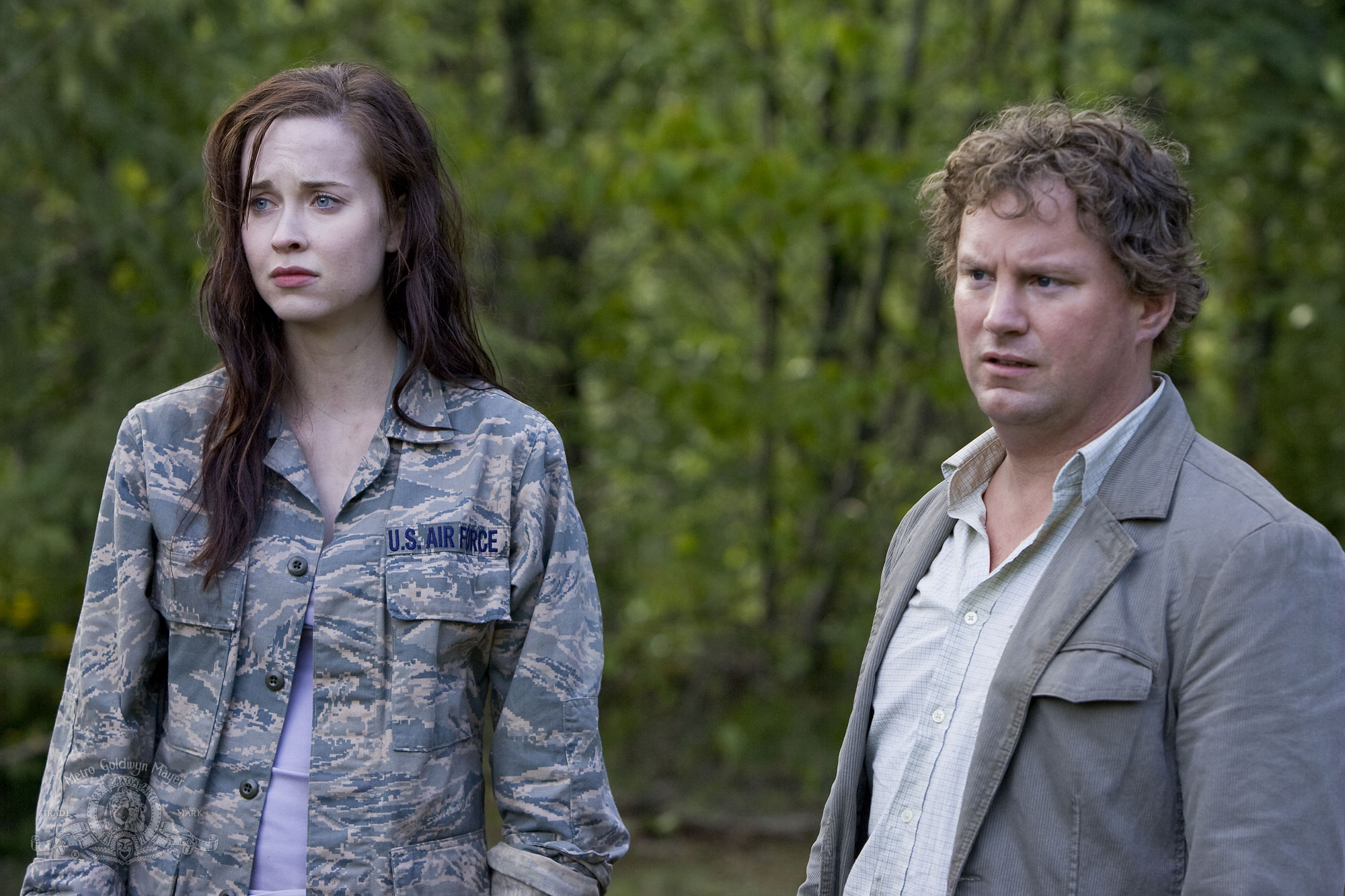 GW: Well, if you spend any amount of time with David Blue, that’s going to happen.

PG: Well, we were doing commentary for “Resurgence” and I threw in a Star Trek 2 reference, I was doing Chekov and I guess my accent was too thick because he didn’t know what I was talking about. I said, “Come on, man! This is your reference! You wouldn’t get this?” And I went, “Botany Bay! Botany Bay! Oh, no!” and he’s, so, “What are you talking about?” and I’m like, “Are you kidding? This is your gold, here!” But yeah, David, every time you throw in a reference to sci-fi, he’s very impressed. That’s how him and I became friends.

GW: You know, I’m surrounded with people who regularly say, “I’m watching Eli and it’s like I’m watching you!” They say that about me. And it’s true. I talk with David every once in a while, I see him Comic-Con or I get on the phone with him for an interview and we just get on like a house on fire. The references going back and forth are just crazy! It’s really funny.

PG: And he’s got an opinion on everything too, right? I’m not saying he’s opinionated, but he feels strongly about these things. He even said — I don’t know if I heard an interview or if he said it to me, but he’s a bigger nerd than Eli is.

GW: [Laughter] Yeah, he has seen it all and with comprehension.

PG: You know, the whole story was, the mythology of him coming into Stargate was that, “Oh, he’s seen every episode,” I thought, “Ah, that’s nice PR.” But no, he seriously did. He watched the entire, what was it, fifteen seasons.

GW: I think it was 314 episodes before SGU was born.

PG: And then you find people who have watched every Doctor Who. And getting into all this, in fact, you guys did a whole Doctor Who special. Seriously, I listen to your podcasts. So, I thought, “Oh, I’ll check out what this Doctor Who is,” so I said, “What was the first episode?” and it goes back to, what was it, the sixties?

PG: Yeah! And I’m like, “There’s no way I’m going to watch the entire series.”

GW: It’s not possible. It’s like a soap opera. 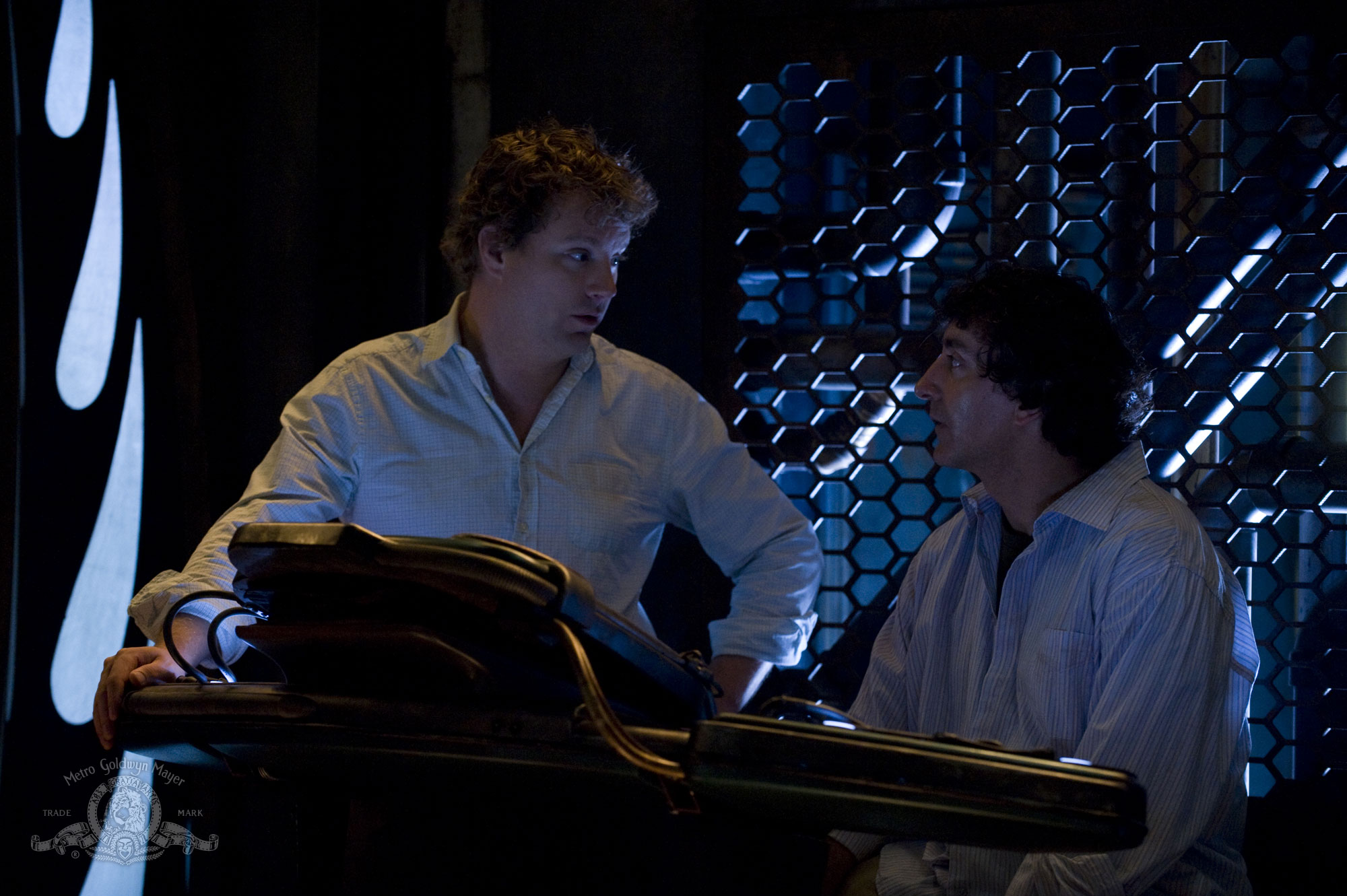 Multiple scientists on Destiny present the opportunity for different points of view, all in technobabble.

PG: Yeah, it goes on. There’s been how many Doctors? Six or seven?

PG: Oh, my God. That’s something that is just too daunting to tackle, so unfortunately, I probably won’t get into it.

GW: Well, the new Doctor Who, everyone’s saying that’s a good place to start. They’re on, I think, Season Three or Four there. That may be a good place for you to enter with, I think, Chris Eccleston.

So, Volker! We got to know this guy a little in Season One. There was some cool stuff there. Is there going to be some more development?

PG: Oh, absolutely. There’s two just popped into my mind from the back half of Season Two. The guys have been so generous to us, because the fact of the matter is, the way that we’re contracted, we’re day players. I’m talking about Peter Kelamis, Jen Spence and Julia and, up until recently, Haig Sutherland. God bless Riley!

GW: May he rest in peace.

PG: Oh, man. That’s something that still just shakes me. That whole moment. But, yeah, we were contracted by the day and we just happened to be getting more days than some of the military, some of the people who have been in one or two episodes. We’re so grateful for it, we’re thrilled to be part of this team. Because of that, yeah, we’re getting storylines. There’s the huge Volker storyline coming up in the second half of Season Two that I can’t tease.

PG: I know you hate spoilers! So I’m really treading lightly! Hey, did you watch “The Greater Good” tonight?

GW: I haven’t seen it yet. Actually, it started airing right now. I am looking forward to it. All I know is that a big portion of what makes Destiny Destiny is revealed. And I’m really looking forward to that. But, like you were saying, you guys are day players. You look at SG-1 and Atlantis, relatively small casts. Atlantis was a little bit bigger, you had Zelenka and you had Chuck and you had a lot of these other folks floating around. But SGU has a huge cast of characters, like nine of them, and on top of that, a huge supporting cast. It’s not easy to service everyone.