Patrick Gilmore: And you’re going to love how that plays out, too, that storyline. I got goosebumps just thinking about that. No, absolutely. I was listening to Darren and Diana had a good point — see, I’m proving that I listen — that every sci-fi story’s been told.

GateWorld: It’s a sci-fi trope. But it’s just the way that it’s told, that’s what makes it interesting.

PG: A trope, that’s the word, yeah. But the way that Louis Ferreira reacted in it was just… I mean, him falling to the ground, laughing. And then, when he gets up, instead of all the action we’ve seen of everything blowing up, we just hear it as he’s wandering the hallways, over the radios. He did such a great job on that. 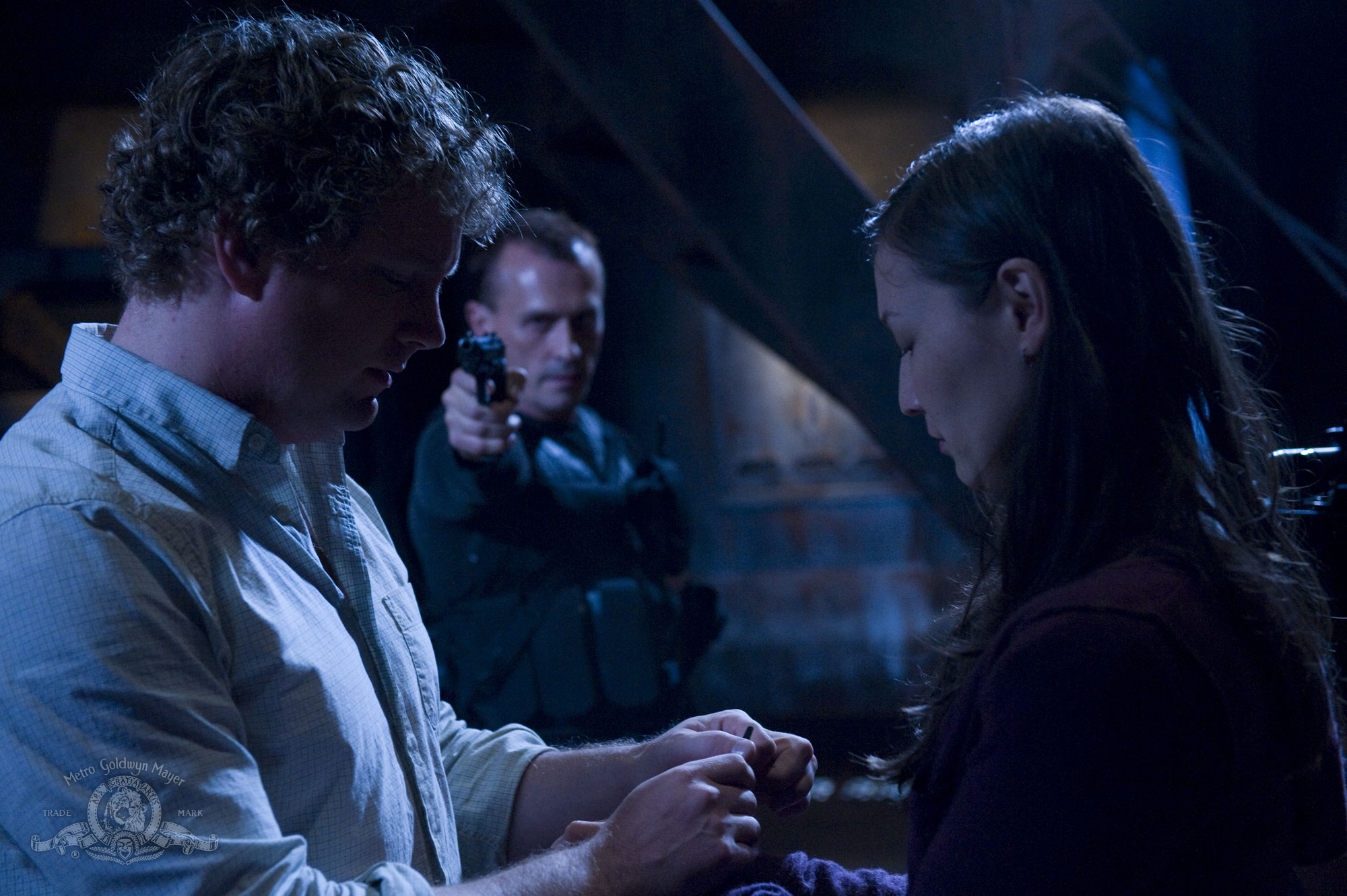 Volker is forced at gunpoint to allow Simeon to take Park as a hostage. From "Malice"

GW: It’s an interesting way to tell the story. I was very disappointed that my motherboard decided to crash because I really wanted to be a part of that discussion.

PG: I just had a flashback from Grade Six. I had a sleep-over at a buddy’s, Damian Ferrari was his name, and he had these books of blueprints of all the ships from Star Trek.

GW: Oh yeah, he probably has the technical manual or something.

PG: Yeah, and the different classes of ships. As far as I knew, there was just the Enterprise. It was unsettling, it was too real. There were literally blueprints of every level.

GW: I think you’re thinking of the Enterprise-D technical manual, which is literally a box of blueprints.

PG: Well yeah, because it was in Grade Six for me that Next Generation came out. I remember kids talking about it at school and they’re like, “Oh, it was weird, and then the tail thing lights up when it goes into hyperspace.” I remember those conversations because I remember going, “I don’t know why I don’t care about these things.” I think it was because I lived on an acreage and my parents, on Saturdays, would kick us outside to go play in the fields rather than sit in front of a TV.

But I remember thinking it was just a TV show and then hanging out in him basement at the sleepover with a big box of Old Dutch potato chips in these really smelly sleeping bags, flipping through these, it was like some sort of World War Two technical thing. I was like, “Do these really exist? I don’t understand how they have all this information!” It blew my mind.

PG: Yeah, so when you get [to be] part of a show like Stargate it’s humbling that there’s been so much written and so much filmed and so much talk about the canon.

GW: Exactly. Well, there’s a lot there. Let’s talk about Riese for a minute. This is a show that had its own little web series last year, of which I saw the first episode and that’s all I saw of it — I’ll be up front with you about that.

PG: GateWorld’s been extremely supportive of it, though, and that’s been wonderful. 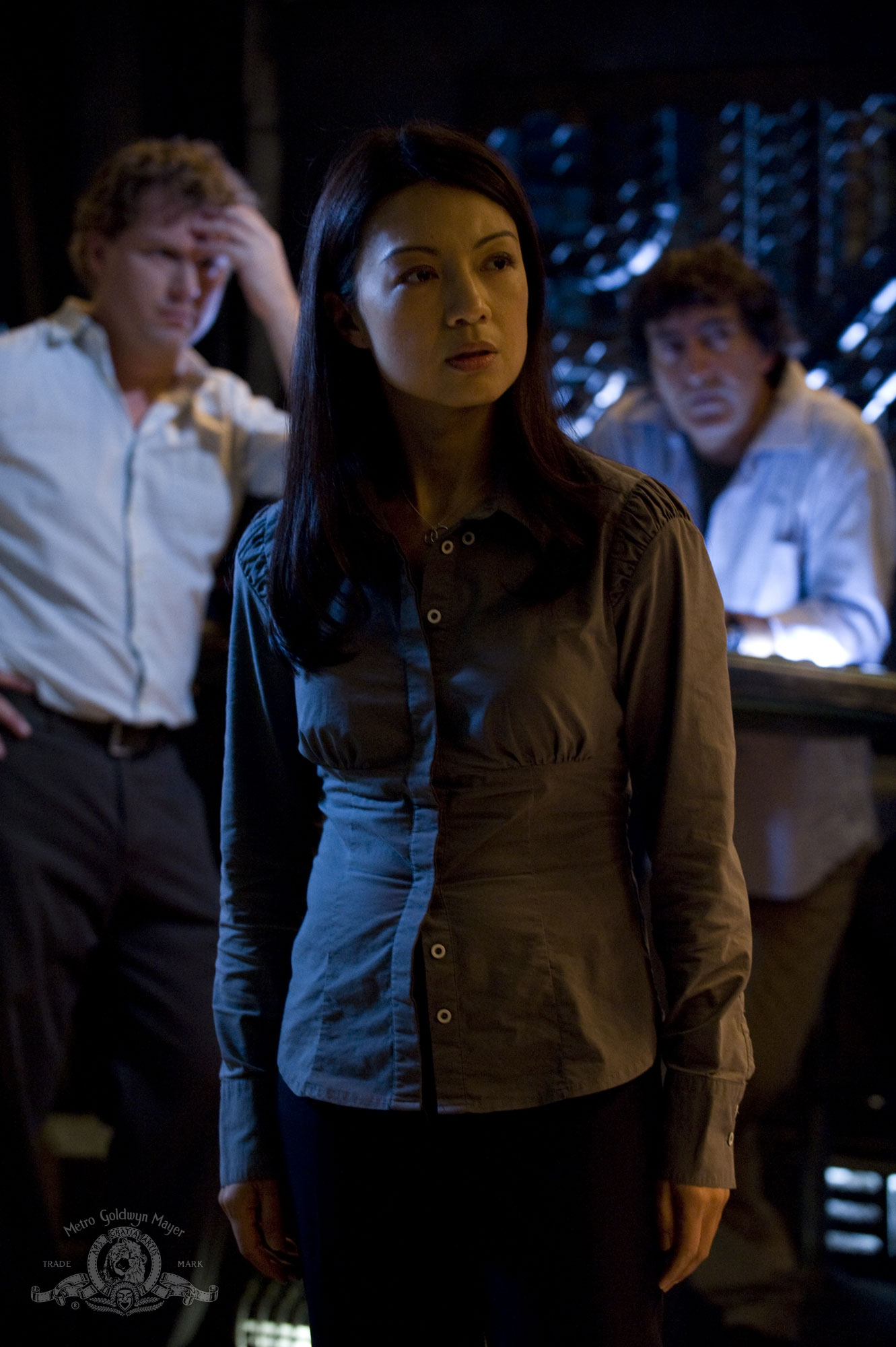 GW: Well, you know, we follow and we watch after our Stargate brethren. And it is absolutely full of Stargate people. You play a character called Trennan, who is apparently on the winning side of a skirmish to take over a kingdom, I believe as in Asgard, so that was kind of funny.

PG: Yeah, there’s a reference there. I’m like, “I know that that has something to do with Stargate!”

PG: Well, it’s coming from the same source, Norse mythology and what have you. In fact, one of the provinces is called Volker.

GW: Exactly! I saw that!

PG: A fan tweeted that to me because they saw it — we’re not seeing it up in Canada. It’s got the geoblocker for Syfy. They haven’t worked out the contracts yet for Canada but it will be available in Canada. We all got together, as a cast and crew, to watch it, I guess it was last weekend, and watched the whole thing. All 10 episodes together.

PG: Yeah, well, we filmed the first chapter, which was five episodes, at about ten minutes a piece, back in August of ’09, then another five episodes for chapter two in December of 2009.

GW: You guys did it all in ’09? There’s hasn’t been any additional footage done since?

PG: No. I never got on board on this until about… well, the story is that I was a casting reader. You know what that is?

GW: You feed lines to someone?

PG: Yeah, basically I’m the actor that the actor auditions opposite. So I worked with a certain casting agency and they so Smallville and they do Supernatural and the recent Wolverine movies and Tron — I got to read the script for Tron and meet Jeff Bridges and Bruce Boxleitner and the whole thing.

But I was doing it for Supernatural and Kaleena Kiff was one of the producer’s assistants and she approached me in December of ’08 and said, “Have you ever cast something yourself?”
I said, “No, never have.”

This was before I auditioned for Stargate, but people always talk about that. They always say, “Oh, I’ve got this project you’d be great for,” and you never hear from them. So I didn’t pay it much heed. And then [I] landed Stargate in January of ’09 and in about June or April, June, something like this, I get a call from Kaleena saying, “All right! We’re going to cast this project. It’s called Exile,” which was the original name of Riese. They sent me the scripts and so I started gathering some actors and we had some audition sessions.