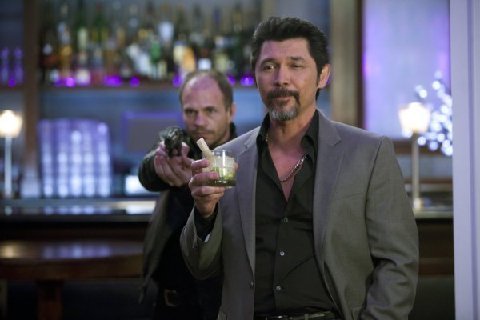 Chuck orchestrates Sarah’s reunion with her former spy team, the C.A.T. Squad. The feline-quick team then try to take down their thuggish nemesis (Lou Diamond Phillips) — but simmering resentments and past secrets soon surface. Meanwhile, a C.A.T. member makes lusty moves on Morgan.

(Thanks to Ron for contributing)

YES! LDP is great and Chuck is awesome! Should be a good episode!

Love to see SG alum on other shows I watch. LDP is a pretty good actor. I can believe him as a good guy or a bad guy.

I <3 chuck! I find it amusing to have an actor from SGU on Chuck.

I love Chuck and this season so far has been much better than last. I also love Lou Diamond Phillips – haven’t really seen him in anything outside of SGU so it’ll be fun to see him in a different role. I really hope NBC renews Chuck because I’m tired of every show I watch getting canceled so far this season.

Lou Diamond Phillips was re-occurring character on “Numb3rs” playing an FBI agent Ian Edgerton, for about 4 seasons. He was in the season finale last Spring (2010). I have also seen him in “Law & Order: SVU” and “24”. He also had his own series “Wolf Lake” but itonly ran for 10-13 episodes On UPN. I think I remember seeing a promo for him on “Psych.” I never saw that episode; but I will look up the one on “Chuck.”

I kind of expected Amy to be the traitor of the group. Only evil people are THAT perky… and in the end I was right. It was nice to see Carina back in the picture after.. what, 4 years? The picture quality on my DISH service was pretty amazing though.