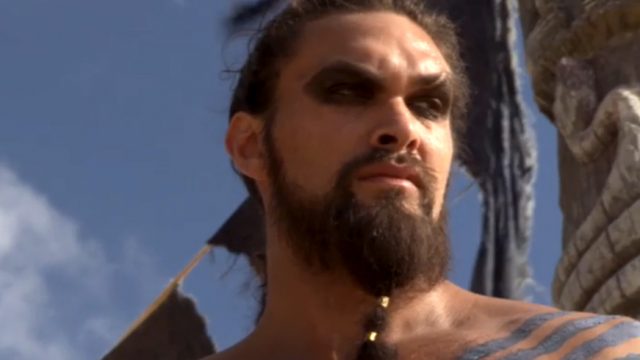 HBO is set to debut its new fantasy series based on the novel series A Song of Ice and Fire by George R.R. Martin later this month! Game of Thrones premieres on Sunday, April 17, and includes an appearance by Jason Momoa — Stargate Atlantis‘s Ronon Dex.

Momoa plays Khal Drogo, the “Horse Lord” leader of a vast tribe of nomadic warriors. He marries Daenerys Targaryen (Emilia Clarke) after receiving her as a strategic gift from House Targaryen, only to fall in love with her.

HBO has released a short video feature on the character, which includes Jason talking about the role:

Momoa’s turn as a leading man in a feature film will be in Conan, which arrives in theaters this August (story).

The first season of Game of Thrones will air over 10 episodes this spring, Sundays at 9/8c on HBO in the United States and Mondays on Sky Atlantic in the U.K.  The series also stars familiar genre vets Sean Bean (The Lord of the Rings), Nikolaj Coster-Waldau (New Amsterdam, Virtuality), Peter Dinklage (Threshold), and Lena Headey (Terminator: The Sarah Connor Chronicles).

Check out the new trailer for the show below.  (Jason appears at minute 1:20.)

Great casting visually here and a roll Jason is well suited for. I don’t seem to remember the character having many lines so he should be ok.

you are the sun of my life!

Really, REALLY excited about this series! I’ve been waiting for it since it was announced and I never read the books (on my list of books to read though). I’ve been dying for a serious fantasy series that does for fantasy what BSG did for SF and what The Walking Dead does for the zombie genre. I’m tired of the Legend of the Seeker/Hercules popcorn-style fantasy.

Happy for Momoa, he’s a fantastic actor who deserves to be known beyond Atlantis. Whenever they did a Ronon-centric episode he always blew it out of the water.

I agree Borwncoat..Momoa always delivered when the show focused on Ronon. Skiznot- Jason Momoa is a fine actor and shame on you for trying to disparage that. (and the word is ROLE not roll!)
I am not sure about Game of Thrones series(have read the books and the first one is great- but after that they are “meh”.) I am glad to see the people from SGA move on and have great sucess. :)

Awesome! I can’t wait to see it. @Browncoat1984: I hope it *doesn’t* do for fantasy what BSG did for sci-fi because BSG was awful. Just out & out awful, not just as sci-fi but bad as anything I’ve ever seen on TV. Popular, sure, but seriously terrible. Unlike BSG this show actually looks good. So don’t jinx it for me & say it’ll be like BSG in anyway when it doesn’t. Now that that’s out of the way, I’m glad Jason Momoa is still on screen, especially on something that looks so awesome. I’ve always thought he was a good… Read more »

@Browncoat1984 I absolutely agree with you,including the awesomeness that was BSG and the genious,feature film quality of The Walking Dead,with a better characterisation than any feature could ever achieve,for obvious reasons..duration.I also share the same hope concerning fantasy genre,cause this looks LOTR quality and I definitely believe it’ll put Hercules/Xena hollywood BS to rest! Can’t wait!!!