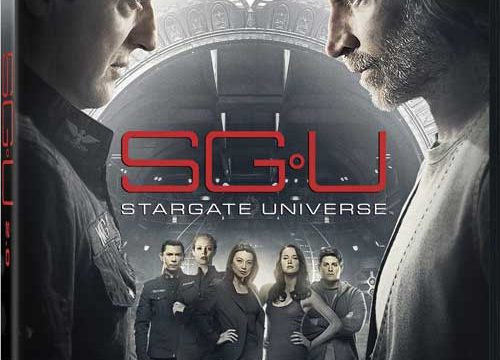 SGU Season Two was released only on DVD in 2011.

As we reported back in March, the second season of Stargate Universe is coming to DVD this spring (Region 1 – North America). MGM and Twentieth-Century Fox Home Entertainment officially announced the release today, bumping up the release date from the previously reported date of June 7 to May 31! That means you’ll be able to own the final 20 episodes of SGU just 22 days after the last episode airs on Syfy Channel.

to lock in the current discount price of $32.99 (34 percent off, subject to change) and support GateWorld with your purchase!

The studio isn’t planning a Blu-ray release in the U.S. at this stage — at least not that it has announced yet. It’s certainly possible that it may come later, like the recently announced Stargate Atlantis: The Complete Series — which comes two years after the DVD edition (story).

(£59.99), indicating that the lack of a high-def release in the U.S. is probably a strategic decision for that market, rather than the studio’s lack of resolve in supporting the Blu-ray format.

The Complete Final Season will be available in the U.K. on July 4.

That is ridiculous. I pre-ordered SGA on Blu-ray because I had been waiting for an HD release. I have SGU Season 1 on Blu-ray. I’m not going to pay for an SD copy of a show that I already have recorded in 720p.

If your internet connection is fast enough, Netflix Instant is getting SGU Season 2 episodes already. Last I saw up to 2.15.

Looks like i’ll have to buy one soon, before they go out of stock because of people in other countries importing it.

I agree with Austin. Got great news with SGA blu ray but now THIS? This makes absolutely no financial sense. Why would I want to buy a SD version of a series when I already own the first season in HD? Not to mention when I can watch it on Netflix in HD streaming anytime I want. No BD = No purchase. Sorry MGM, I’m a big Stargate fan and a completist when it comes to collection my shows on DVD/Blu ray, but I also like to be consistent in my collections. There’s no reason NOT to do it in… Read more »

And because we haven’t been kicked in the teeth enough. Let’s give the few remaining fans of a show with the most drop dead gorgeous sfx of any show currently on TV… no Blu Ray release.

Thanks guys. Way to make someone who supported you to the end feel great.

ill wait for the blu ray. It’ll eventually be released. Like the article said, its a strategic move to make more money off the series before they shelve it. Theres no possible way that this season dosnt get released on blu ray.

This Absolutley SUX no season three and now NO BLU RAY Copy just doing DVD only, by gee MGM whats up with yah. The biggest franchise and you’re kissing it off.

Thanks guys…ordered. Not much else to do in support for now.

Well, it’s bloody obvious that they don’t want to release it in Blue Ray while showing it in oversea markets.

I hate this DVD/Blue Ray/yadayadayada planning. I never have seen solid numbers to justify such release schedules. I’m more ready to bet that they just have contracts they should avoid to release Blue Ray before SGU finishes it’s run in numerious countries. We all know that people ship stuff (nevermind restrictions) from US like tv series.

a strange decision that the U.S. will not SGU S2 on BluRay. And Europe will be. It is guilty of Fox `s

American consumers are more into instant gratification and so more inclined to buy the dvd now AND the blu ray when it comes out. Those claiming they’ll wait, if they actually do, don’t represent the average american consumer. European consumers are much more accustomed to saving up for something good, waiting until they get it for what they are willing to pay and replace things less often. It’s a smart business move.

What, no bonus feature about the writers??? A poster of them would be awesome. I just bought a new set of darts…

I would like to know why they are releasing SGU in blu ray in the UK but not the SGA, I have scoured amazon.co.uk but nothing that makes no sence. Americans feel lucky you get all the good stargate blurays.

but what you have a problem in the U.S. buy for SGA and SGU in the UK.

MGM could have gotten high sales from the DVD set if they included one more bonus, a short mini-episode to resolve the cliffhanger, or, at the very least, the producers, on camera, telling us, the fans, how it would have been resolved and, how next 3 years would have played out. Unless they are hoping for a miniseries to end it, like Farscape got a couple of years after the series was canceled by SyFy.

I’ll tell you what’s happened to MGM, they’re being run by a bunch of bankers who have no clue about how passionate sci-fi fans are about there series or how big Stargate really is. It doesn’t help that Stargate isn’t as much of a part of mainstream culture as Star Trek or Star Wars, but I bet that if you ask the average fan of sci-fi TV, they’ll tell you that they enjoy Stargate. I think that the biggest culprit here is MGM, their poor financial decisions in the past and their current situation with bankruptcy. I’m sure we’ll see… Read more »

@Browncoat1984 – MGM is run by something worse than bankers – Network Execs. Bankers will at least consider long-term investments. Network Execs only care about what it’s doing right now. Bankers will sometimes see things as making some money is better than making no money. Network Execs see things as not making enough money and something else could be making more. But…this is how it was since the beginning of Stargate and long before. And the producers of the show knew this.