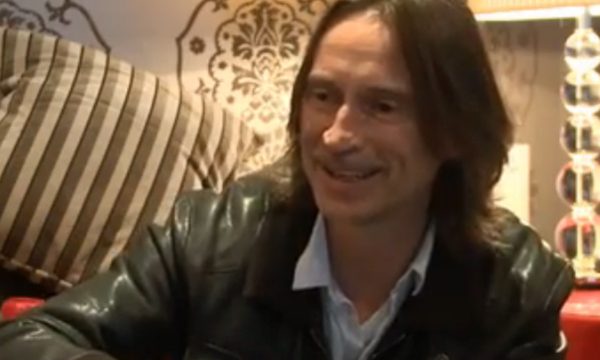 Robert Carlyle (SGU‘s Nicholas Rush) is talking about his new fantasy gig in a 3-part interview with “With Kids,” a Glasgow-based child advocacy group that has just announced that the actor has joined them as an official spokesperson.

Watch the video below, in which Carlyle talks about his own family life growing up in Scotland. He turns to his new show, Once Upon A Time, in the last couple of minutes.

Carlyle plays Rumplestiltskin, described by Deadline as an expert on black magic who agrees to help Snow White and Prince Charming counteract the Evil Queen’s dark spells … but for a price. (If the pilot is picked up to series, it’s not known just how large an on-going role Carlyle would have.)

“He’s absolutely, totally insane,” Carlyle said of his character. “What’s happened is that in fairy [tale] land there is an evil queen, and the evil queen has put a curse on the fairy tale characters because she’s fed up with happy endings. No more happy endings! So Snow White tries to do something about it.”

“They build a jail in fairy [tale] land just for him,” Carlyle laughed.

The show is created by Adam Horowitz and Edward Kitsis, who previously served as producers on LOST. Before that, they produced shows like Felicity and the short-lived comic book series Birds of Prey.

Once Upon A Time shot in Vancouver.

It’s one of several pilots currently in the works that seek to mesh elements of traditional fantasy and fairy tales with modern-day settings. Other such hopefuls include ABC’s Poe (Edgar Allen Poe as an 1840s Boston detective), Ron Moore’s 17th Precinct (detectives in a city where magic is commonplace), and NBC’s Grimm.

We expect to hear whether ABC will pick up Once Upon A Time as a new series during the network’s upfront presentation next Tuesday, May 17. (You can read a spoiler-laden review of the pilot script here.) Stay tuned!

(Thanks to ELQ for the tip!)

I hope Robert will get some good gigs. I would like to get him his own tv series like House or Lie to Me, because he is just that good. Good luck to him. Good luck to all SG team.

Could you imagine if he got the part of the Doctor after Matt Smith ? He’d be friggin unreal. He was one of the favourites to be The Doctor after Tennant left, but then he landed SGU and I suppose that took him out of the running, but now ? Ohhhh, the possibilities !