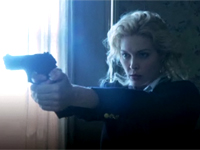 In the sixth episode of the season, titled “Bill and Gary’s Excellent Adventure,” the Section 8 team is assigned to investigate after a witness is inexplicably murdered inside a locked room at a federal courthouse.

Huffman played Lt. Tamara Johansen for two years on SGU. Watch the teaser for her Alphas appearance below.

GateWorld just caught up with Alaina this past weekend at the Wizard World convention in Chicago, so stay tuned for our exclusive interview. Follow her on Twitter @AlainaHuffman … and be sure to congratulate her on her fourth child, which she announced that she and her husband are expecting in December!

A great actress. I saw her first on Smallville as The Black Canary and then as T.J on SGU and enjoyed her on both shows! Would have liked to see more of her in Smallville, but glad they brought her back for the final season!

On Syfy? dang. Guess I’ll catch it somewhere else.

just say there is no more stargate news. it will begin the healing process

“The Section 8 team is assigned to investigate after a witness is inexplicably murdered inside a locked room at a federal courthouse.”

Uh … that’s not the premise for this episode. “Bill and Gary’s Excellent Adventure” has to do with dealing with a kidnapping and ransom demand.

By the way, there was another Stargate actor in this episode. Peter Wingfield (Tanith from “SG-1”) also guest starred.

Great for her, sorry that channel is dead to me..let me know when they show up on any channel accept SyFail

Good for her! Still, the show is too draining. 3 eps was enough for me.

I knew that it was her when i saw the episode! :D

grif? from comicbookmovie? you actually like something? good for you.