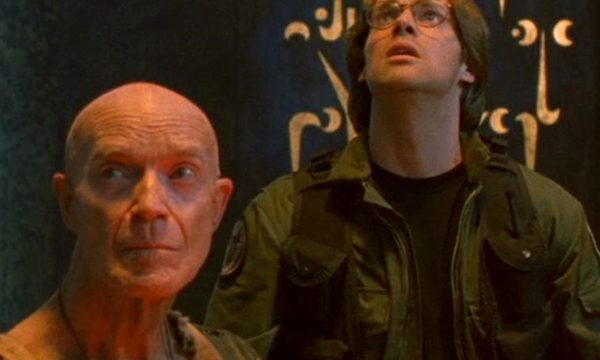 “This is meaning of life stuff!”

Last month fans picked “The Torment of Tantalus” as the best episode of Stargate SG-1‘s first season, which makes it our pick for Darren and David’s second episode commentary! It’s an epic story with a lot of heart and humor, tying in the history of the Langford family with the future of Stargate mythology.

HOW TO LISTEN:
Our commentary is meant to be enjoyed while you watch “The Torment of Tantalus” in real-time. Load up the commentary on your computer or MP3 player, then start the episode on your DVD player or computer. (Remember to keep the volume turned down a bit.) As soon as you see the MGM lion at the episode’s start, press play on the commentary!

What’s Next? We’ll pick one of our favorites from SG-1 Season Two for our next episode commentary — stay tuned to find out which episode! Voting for the Season Two Awards starts soon.

Ah rly good ep but again sg1 doesnt have any bad ep :).Nice intro for stuffs about Asgards and Ancient (in my opinion)

@Djokula90 there are some bad eps throughout the 10 seasons lol, but not too many.:)

Yup,I know,but that doesnt change fact that SG1 is best show i ever watched,SGA is 2. ofc :)

Indeed SG1 is the best show ever (and I’m a trekker :) Also Torment of Tantalus is my favourite episode (I cry each time)

Thanks for new “podcast”!

So how can I download the mp3-file? It’s not on “Visit the Fan Commentary page for more episodes!”

Should be sorted now. Thanks!

Stargate rewatch is best thing that happened on Syfy,since,siiince hmm i cant think of anything good :D

Then you didnt watched ep carefully,they was in some bulding,and outside was some storm or whatever,and when they passed through gate,whole place logicaly collapsed,that was the point when they found Ernest to get the hell out of there before that happen.