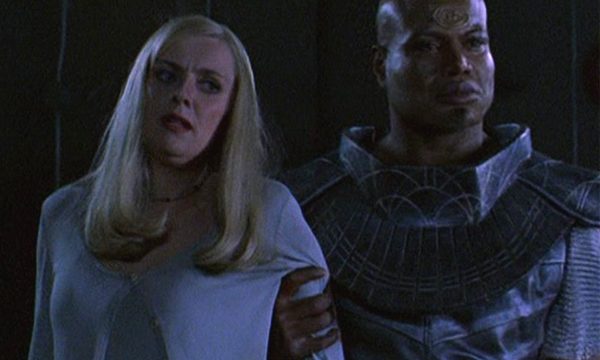 “Ours is the only reality of consequence …”

Stargate Command is shocked to discover that two of their own — Samantha Carter and the late Major Charles Kawalsky — have arrived from a parallel reality through the Quantum Mirror. With Dr. Carter mourning the death of her husband and suffering from entropic cascade failure, the team has no choice but to go through the mirror and help them retake their world from a Goa’uld invasion force.

Our latest fan commentary is for “Point of View,” one of our favorite episodes of Stargate SG-1‘s amazing third season! We’re a little shocked that it didn’t end up making the Top 5 episodes nominated for the Season Three Awards, but such is life. Play the audio file when you sit down to watch the episode, and you can watch along with GateWorld’s Darren and David!

We’re at the end of Season Three in the Stargate Rewatch! Let us know how your Rewatch is going so far, and if you’ve listened to any of our episode commentaries yet.

Visit the Fan Commentary page for more episodes! We’ll record our next commentary on the episode fans vote as the Best Episode of Season Three.

HOW TO LISTEN:
Our commentary is meant to be enjoyed while you watch “Point of View” in real-time. Load up the commentary on your computer or MP3 player, then start the episode on your DVD player or computer. (Remember to keep the volume on the episode turned down a bit.) As soon as you see the MGM lion at the episode’s start, press play on the commentary!

What’s Next? Stay tuned to find out which episode fans voted the Best Episode of SG-1 Season Three!

The RSS feed button takes you to a page which does not have “Point Of View” available. It’s the “missing link” in our GateWorld evolution.

It’s there — you may be looking at a cached version of the feed and need to refresh.

Good podcast, keep more coming, if you post them I will listen. Also I would love you to get special guest, like Amanda Tapping, and others if they will do it.

Guys, Thanks for doing these fun commentaries! A few corrections, however. You said in “Point of View” that the alternate Jack and Sam in “There But for the Grace of GOD” were married. Wrong! they were just engaged. And in the commentary for “Torment of Tantalus” you said that Sam figured out how to power the gate. Again, wrong! It was Jack who figured out how to power the gate when he said, “Couldn’t we just do that ‘Ben Franklin thing??” I hate to be such a stickler, but it’s especially important to point out what a truly creative genius… Read more »