Relax … Take this loop off. Today we wrap up the exciting fourth month of the worldwide Stargate Rewatch, during which participants have enjoyed one of the greatest seasons in Stargate history: Stargate SG-1 Season Four. You voted on the fan-favorite episode from this year, favorite character moments, best guest star, and more. Here are the results!

Next month we’ll enjoy the holidays and ring out 2011 with SG-1 Season Five! Come back later this week to find out how to nominate your favorites for next month’s awards. If you don’t nominate ’em, they can’t win! 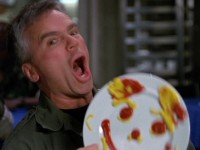 WHACKO! Caught in a time-loop that forces him to repeat the same day over and over again, Jack loses his patience and starts to go “whacko!”

From: “Window of Opportunity” 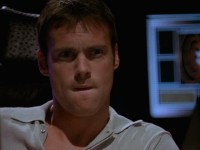 Cut Out The Heart. Consumed by a Goa’uld’s hunger for power in a dream world, Daniel betrays his friends and turns a powerful satellite weapon on Earth. 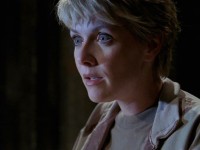 First Time For Everything. To save the Tok’ra and deal Apophis’ fleet a crippling blow, Sam uses a Stargate connected to a black hole to blow up a sun. 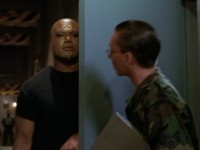 No More Mr. Nice Jaffa. Stuck in a time-loop, Teal’c takes advantage of the situation to play golf and learn to juggle with Colonel O’Neill … and shoves a door back in the face of a hapless young Airman.

From: “Window of Opportunity” 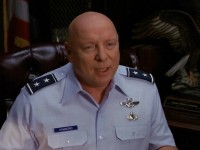 Powered Up. After a super-powered Jack O’Neill accidentally kicks a hole in the wall, a confounded General Hammond tells him to “get the hell out of my office!” 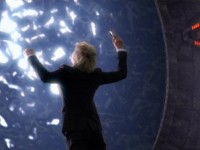 Important Delivery. In an alternate future, SG-1 makes the ultimate sacrifice to get a warning note back through time to prevent an alliance with the Aschen and the defeat of Earth. 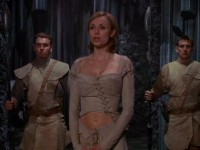 One of Earth’s most important allies, the Tok’ra are a rogue faction of Goa’uld who oppose the System Lords and everything the Goa’uld stand for. Season Four was huge for them, as they took in the spy Tanith, used SG-1 as guinea pigs, and helped turn the tide against Apophis. 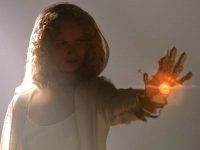 Some Goa’uld are menacing because they wield so much power … but others are terrifying even when they seem to have no power at all. Osiris rose from her prison on Earth, taking over Daniel’s ex and vowing her revenge. 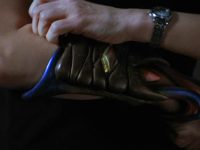 Created by a long-dead civilization and rediscovered by the Tok’ra Anise, the armbands enhance all of the wearers’ natural abilities: super strength, speed, cognitive processes … and one hell of a case of the munchies. 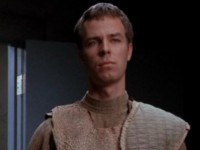 JR Bourne brings gravity, heart, and charm to an important role — one of the few Tok’ra who is sympathetic with Earth and its people. After serving as a key liaison for two years, Martouf is tragically killed in Season Four.

From: “Divide and Conquer” 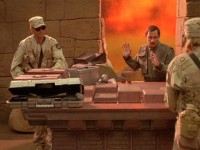 An Ancient device, a loop in time, and an infinite number of laugh-out-loud scenarios make this one of the greatest episodes of Stargate — ever. And to top it all off, Jack O’Neill delivers a powerful emotional punch at the episode’s end.

You can still join us for the Stargate Rewatch! We’re revisiting all 17 seasons of Stargate history from the beginning — one season each month, through 2012. Stay tuned to find out how to nominate your favorite episodes and character moments for the December awards.

The moment near the end when Jack tells Malikai that he lost his son chokes me up every time I watch it, I don’t mind admitting. That may well be the best bit of acting I’ve ever seen RDA do. A “powerful emotional punch” is an understatement.

Most of my votes one. The only ones I don’t agree with. The best Hammond moment as the one from chain reaction. For coolest technology I had them in the reverse order Aschen transporters, time loop device and the arm bands last.

@fzammetti:
Yes, that’s one of my favorite Jack moments in the series.

I agree with most.

I still think Tanith was better than Osiris.

Window of Opportunity was by far the best of the season, “In the middle of my backswing!”

I’m kind of surprised by the results of this month, in particular I’m surprised about the lack of love for Scorched Earth, only appearing for best Daniel moment where it lost :p

I think scorched earth is my favourite episode of the season, sure Windows of Opportunity that everyone seem to love is a great episode, but not that good in my opinion.

Wow I’m surprised that Willie Garson as Martin Loyd wasnt higher up. I think he is a great actor and he is always on the “celebration episodes” 100th episode… 200 episode… Im sure he will be on the ballot in coming seasons. He will win one. Other than that it turned out how I expected it to. I however voted for the Aschen as best Alien Race. Anyways great Season!!! One of, if not, the best.

@Leonick
Color me VERY surprised for lack of “Scorched Earth” votes– including the low ranking of my favorite Daniel moment in that same ep.

Now, I agree with the fans if they said “Absolute Power” was a great *Michael Shands* moment… but the events in the ep itself wasn’t real; in “Earth”, however, Daniel was actually trying to stop a massive terraforming device from destroying a group of people, put there by SG-1 themselves.

@Leonick – I agree! Really liked Scorched.. and Daniel’s part. Don’t like Window… – think it’s highly overrated and to sit and watch the same thing over and over, nah not my cup… And Jack’s comment is soo lame, guess one has to like golf to appreciate that…
@medegno51 hehe fun comment re. Urgo.
Didn’t get many of my favourites this time – think Martuf was the only one :/ so a bit disappointed :)