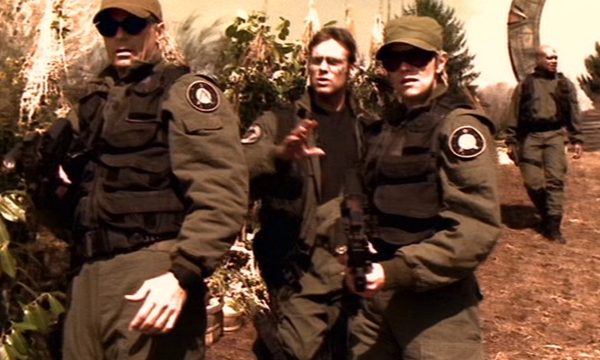 ‘Oh, he has a name …. the likes of you are simply forbidden to know it.’

Happy December, Stargate Rewatchers! This week we begin Stargate SG-1 Season Five, a pivotal year that concluded the series’ Showtime run and introduced the galaxy’s greatest Goa’uld threat ever. SG-1 also said goodbye to one of its own.

Here’s your intro to Season Five and links to everything related here on GateWorld!

We want to hear from you! If you are blogging about your Rewatch, writing new fanfic, creating artwork, or doing something else related to SG-1 Season Five, e-mail us a brief description and a link.

Learn more about the Stargate Rewatch and how you can participate.

Stargate SG-1 Season Five aired on Showtime in the U.S. from 2001 to 2002. Apophis has been defeated once again, leaving his armies scattered and the System Lords positioning themselves to fill the power void. One Goa’uld in particular shows himself as inexplicably powerful, knocking down Earth’s allies and settling his sights on us, as well. Though his identity remained a mystery for much of the season, it would finally be revealed: Anubis!

Meanwhile, Daniel is reunited with his Unas friend Chaka, Teal’c goes through a major personal identity crisis, and Earth narrowly avoids a fatal alliance with the Aschen.

Come back in two weeks to cast your ballot for the Season Five Awards!