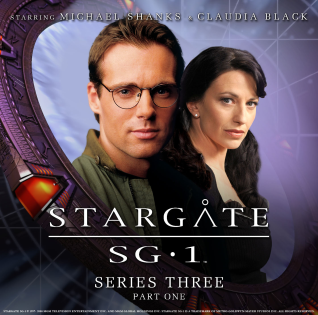 Part 1 of Series Three will be released at the end of May, followed by Part 2 in August. Each part will run approximately three hours in length, and run £25.00 for three CDs or £20.00 for a digital download.

Suddenly it’s friend against friend, none of their allies can be relied upon and they’re the universe’s only hope to foil the latest scheme concocted by the last System Lord, Baal.

Will Daniel, Vala and a few of Vala’s less than savoury friends be enough to stop a conspiracy that reaches deep into the heart of Stargate Command and threatens to destroy everything they’ve spent years building?

So far the publisher has not announced any stand-alone title for the story (or stories) — just “Stargate SG-1: Series Three.”  With six hours of total production time, it could be that each half of the series will be comprised of three individual, hour-long stories (as with past series).

Visit BigFinish.com to learn more and to pre-order!

Awesome. So I’m guessing that it takes place before Continuum because Baal is in it. Though there could be more clones, I guess. And before the SGC got mothballed, with Homeworld Command in the Pentagon taking its place in SGU.

The most disappointing thing about Continuum to me was that we didn’t get to see Baal’s host speak after Baal was removed. It would have been interesting to see what he said…what he was like. Too bad he couldn’t have made a guest appearance on SGU while it was on….or in the third movie if they had ever made it! Maybe he could have been a good guy that worked with them.

Homeworld Command was created after season 8 of SG. HWC over sees all things related to the safety of the Earth, including Atlantis, SGC, Antartica, and Icarus Base.

What you may be thinking of is the IOA. But SGC is still around.

As for timeline, It should be able to take place after Continuum.

That might not be exactly what we want, but … it is something. And, I hope that’s a start. Would I love some positive new series, film anything on the SG front and at least a new audio series is something.

To be honest it doesn’t really sound that good.

i can not wait

I’m disappointed, and first thought was ‘ewww’, but then, it is stargate, and it’s our beloved characters, so Gateworld, be sure to let us know when they’re selling it because if all of us buy enough of them, who knows, maybe those bastards at MGM will see new dollar signs. Maybe if the latest James Bond film sinks, then they’d brush off their second largest money maker of all time.

unfortunately, these things hardly ever sell much. but atleast it keeps the canon going.

darsfog– I had thought the same thing. They never really say for sure, but there’s a couple of times in SGU that I got the impression that the Stargate was moved to HWC in the Pentagon. I had asked Mallozzi about it last February (2011)– I just pulled up his answer again. This is it: BT writes: “In SGU, when the Destiny crew connect to the stones in the Pentagon (also, where General O’neill’s office is), is this the Office of Homeworld Command?” Answer: It is. BT also writes: “If it is Homeworld Command, why was this chosen to be… Read more »

they had to redo those old sets to make new ones, they didnt care too much to come up with an explanation. They were reluctant in gating back to earth and chose destiny instead even though there was no real danger to SGC besides the earth gate had an iris and i still cant get passed this one incongruent start to the series. If the gate is in the pentagon well then that would just be absurd, so close to the white house too. You know what wouldve made sense, if Earth closed shop and put the gate in storage;… Read more »

They charge $102 for 6 episodes of these audiobooks. That’s pretty absurd, I bought 6 seasons of Atlantis DVDs for that price. Almost 5000 hours of film-like content vs one guy in a booth talking to himself… hmmm… not to mention they’re pretty hit and miss – like I couldn’t follow the ‘Perchance to Dream’ one with Beckett at all. It is pretty exciting that they’re creating stargate content, a little stargate is better than no stargate, and I wish I could support that… but even a fraction of that price would seem like too much money for me, since… Read more »

The other problem with them is that they are poorly written. The story ideas are good, even if the underlying plot revelations aren’t very original, but often they fail to keep you compelled in the story, and the dialogue is very cliched and predictable. It’s all very tropes-based like fan fiction. The same can be said of the additional actor/s they have in the episodes, the delivery of the lines is always done in the ‘obvious acting’ style any kid in a school play would naturally gravitate towards, because that’s how they’ve seen acting is done on every low budget… Read more »