GateWorld: Let’s shift gears a little bit and talk some Sanctuary. The last time that we talked … it was prior to Season Three … was the last time I talked with you.

GW: A lot has occurred since then, both on the business side and also within the series’ mythology. After resolving the whole Kali storyline, there’s some great stand-alone episodes in the first part of Season Three. We also get to see some developing relationships for Will and for Henry start to build up. Was that always part of the plan going into the season? Or was it more of a response to fans wanting to see more of the personal lives of the characters?

AT: I think in any series it makes sense that, once you get all the blocks in place and you know who’s who in the zoo and what the zoo looks like, then the next logical step is to start to bring out more of the personal aspects of the characters. For us, things like when Pascale Hutton came on the show, she was so fantastic and so lovely. So it made sense to bring her back more and more. And even when she was pregnant, and we were trying to shoot hiding her pregnancy and when she was really pregnant and we didn’t try to hide her pregnancy — you find something really special and you find a great chemistry. And that sort of helps predicate how it rolls out. 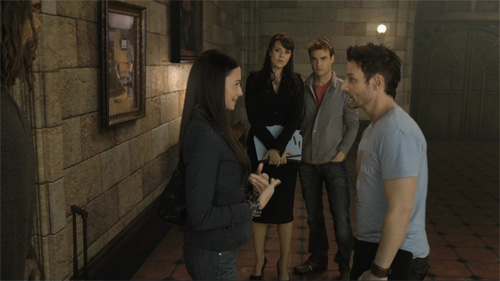 Love interests for the characters was a logical step, Tapping said.

GW: It’s been nice seeing them happy for an extended period and not have something interfere with that.

Martin Wood: I think when we first started Sanctuary … The reason I laughed when you first asked that question is because, I have to say, there was no plan. There was an idea. It was a grand idea up here (points to his head). And what ended up happening was that, as Amanda said, things started to gel and people came into our lives and they started to work. You just want to keep moving those storylines along. And there were storylines that we had thought we were going to pursue. And they sort of fizzled because you really didn’t like where they were headed, or what’s happening with them.

It’s a very organic process making a TV series. And unless you have a very definitive end mark that you want to get to … we never did. Because we were like “Why would we want to stop this?”

AT: We are also in the position on Sanctuary where we never knew that much in advance of when we had to start shooting. Or whether we had the final green light because of our financing situation. So we often only had a month, five weeks if we were lucky, to prep an entire thirteen episode season. Or in one case, a twenty episode season. So, it’s not like ‘Let’s get the first three episodes out and then these are our long-term goals’. But the minutiae of it is …

We had Jonathon Young come in and he blew us away so much that every year we wanted to use him more and more. And it was basically based on Jonathon’s availability. It was like ‘So when are you not doing a play?’ and ‘Alright, we’ll plug you in here and plug you in here and here.’ That was like seven episodes.

MW: We actually scrapped a huge number of plans because he wasn’t available. I think the interesting thing about what happens when you do that kind of stuff and you are that liquid … really, the only place that a plan resided was within Damian [Kindler]’s brain. He had an inkling about how to get somewhere. And he’d sit down with the two of us and we’d discuss plans. What’s funny is that because it was a very dynamic plan in terms of “we could go here,” we all got to input how we wanted to get there. And it doesn’t usually happen like that. It doesn’t usually happen that you get the ability to have that sort of a growing petri dish of a series inception in there. That allows you to keep moving forward but everybody has their fingers in it. Which is awful if you put your fingers in a petri dish.

AT: Probably why I’m sick! Strep!

MW: Yep, you had your fingers in the petri dish.

GW: Midway through Season Three began the whole Hollow Earth plot thread, and that actually had repercussions all the way to the end of Season Four.

MW: Yeah, and he was gone for like four days! We didn’t know where he was. He came back and he said “I have a great idea!”. And we never figured it out until we were shooting the one show in his backyard, and we were like ‘What is this?’ and he says ‘It’s access to Hollow Earth.’ It’s unbelievable.

AT: And that’s how it all started.

MW: That’s how it started. [laughs]

GW: It was just a big gopher, that’s all it was.

GW: It had repercussions all the way through the end of Season Four and an opportunity to give all the characters some much deeper plotlines to work with.

MW: Season Four was the most amazing season we did. Bar none, it was the greatest season we had. 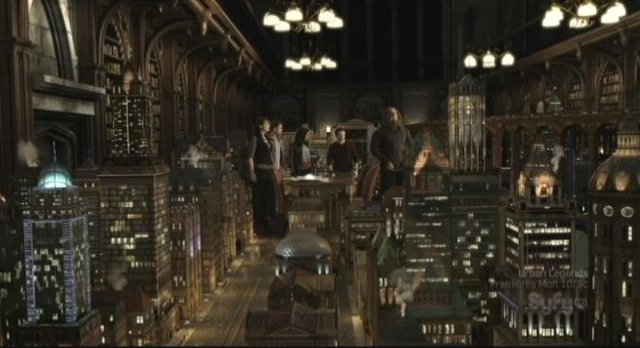 Both Wood and Tapping agree Hollow Earth was an excellent idea limited by certain restraints.

GW: Were there any aspects of that continuing storyline that you felt worked better than others? Or ones that didn’t work as well even if it still made it into the finished product that you maybe would have done differently?

MW: I think … it was such a huge idea. When you actually decide to make a whole other world on a TV show, especially one with a budget that is like three people’s wallets big, it’s really difficult. We tend to overreach like that a little bit, and in that case, we stretched our resources as far as we could in creating Hollow Earth. I think once we got back, and deciding the repercussions of Hollow Earth was what we were going to deal with on our own surface planet — it was a little bit easier than being in Hollow Earth.

AT: I liked Praxis, but I wasn’t particularly fond of the rest of Hollow Earth.

AT: The fungus farmers, and the caves. Like Martin said, when you have an idea that is so big, it’s almost impossible on our budget to realize the full potential of what we wanted to realize. But I thought Praxis was incredibly cool. I think bringing them up, and the idea of containment made sense, but, I don’t know …

MW: I don’t think any of us were really super happy with it. I think we liked the idea of Hollow Earth better than the way it came out.

MW: Yeah, and I’m glad we got rid of the Hobbits, because that would have been a terrible waste …

AT: That was so expensive.

NEXT: Amanda and Martin breakdown some of Sanctuary‘s high-concept Season Three episodes