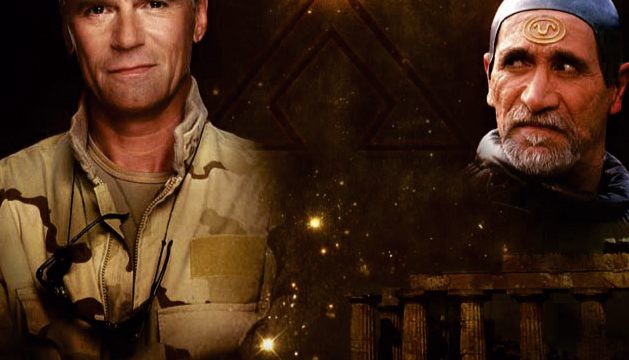 Fandemonium today is set to announce its production slate of eight new official Stargate SG-1 and Atlantis tie-in novels, set to be released over the next year! The list includes the final titles in the Atlantis “virtual Season Six” Legacy, as well as a follow-up to Diana Botsford’s popular Four Dragons.

The novels are available in print and as e-books from major online retailers, including Amazon

. Back titles in the series will be available as e-books, or in print at StargateNovels.com.

Here’s your exclusive first look at the upcoming titles, with story descriptions straight from the publisher:

The new wave of releases will begin in June, with Stargate SG-1: Oceans of Dust (out June 14). Penned by Peter J. Evans, it’s a classic SG-1 adventure story involving Goa’uld, Master Bra’tac, and a mysterious creature.

Something lurks beneath the ancient sands of Egypt. It is the stuff of Jaffa nightmares, its name a whisper in the dark. And it is stirring …

When disaster strikes an Egyptian dig, SG-1 are brought in to investigate. But nothing can prepare them for what they find among the ruins. Walking in the dust of a thousand deaths, they discover a creature of unimaginable evil — a creature the insane Goa’uld Neheb-Kau wants to use as a terrible weapon.

With Teal’c and Major Carter in the hands of the enemy, Colonel O’Neill and Daniel Jackson recruit Master Bra’tac to help track the creature across the galaxy in a desperate bid to destroy it before it turns their friends — and the whole galaxy — to dust …

Following on its heels is the newest Atlantis title, The Furies (formerly The Avengers … retitled for reasons obvious to any summer moviegoer). Written by Jo Graham, The Furies is due out on June 28.

When disaster strikes, the Atlantis team resort to desperate measures in their bid to save Doctor Rodney McKay from the clutches of Queen Death.

With the lives of McKay and Colonel Sheppard at stake, Teyla Emagan must once again assume the role of Queen Steelflower as she attempts a dangerous subterfuge — a subterfuge made more complex by a tentative alliance with Guide, the Wraith once known as Todd. But in order to deceive Queen Death, Teyla must embrace her Wraith heritage more closely than she has ever done before. So closely that she may lose herself forever …

As the web of intrigue, deceit and betrayal grows ever more tangled, this thrilling installment of the Legacy series takes the team into the very heart of darkness.

Also coming in the next year:

STARGATE SG-1 Heart’s Desire – by Amy Griswald (July 2012)
In this classic SG-1 adventure, the team battle pirates in the skies over a mountainous world as they search for the legendary ‘Heart’s Desire’.

STARGATE ATLANTIS Secrets (Legacy Book 5) (August 2012)
As the repercussions of Rodney’s abduction shake Atlantis, we find out more about the origins of the Wraith and the future of Pegasus.

STARGATE ATLANTIS The Inheritors (Legacy Book 6) (November 2012)
Hold onto your seats for this roller coaster finale to the hugely popular Legacy series!

STARGATE SG-1 Ourobouros – by Melissa Scott (January 2013)
When SG-1 discover one of Janus’s abandoned devices, they’re transported to a distant galaxy where nothing is as it should be.

STARGATE SG-1 Moebius Squared – by Jo Graham & Melissa Scott (February 2013)
In search of Egeria, the Tok’ra queen, Cameron Mitchell’s team travel back to Ancient Egypt where they find another version of SG-1, trapped in the past after helping the Egyptians overthrow Ra…

Find out more about the Stargate novel series in GateWorld’s Books section, and over at StargateNovels.com.

I like the sound of “Moebius Squared”! Alternate Sam/Jack ‘ship hopes! :)

This is great news. I’ve had Oceans of Dust pre-ordered for quite a while now. Glad to see that there’s more to follow.

Amazon and Barnes and Noble both say that Oceans of Dust is not coming out until July 16th, so I’m curious as to where June 14th came from.

How long until you think they take over SGU with some Legacy novels?

and i dont plan on reading any of them. i want stargate in movie or show form. i do not care about the books. want o make a a stargate book? make one with all of the concept art from all of the shows. the dvds show us nothing.

@SamJackShipper93: The dates come from Fandemonium (who said the info would also be going out on their e-mail newsletter this week, for those who are subscribed). I know that retailers often run with estimated dates and then update them later, though I’m not sure if the exact dates provided by the publisher necessarily mean that they’ll be in Amazon’s warehouse and shipping on that day.

I liked the first SGA novel by Jo G, but those silly, ridiculous Wraith names and the fact that they separated the team turned me off from reading the rest of them. What’s Atlantis without the TEAM???!!

Have been looking forward to several of these novels for a long time. So the announcement is nice but let’s see if MGM can keep to the appointed dates. I guarantee we will not see most of these novels out at the the dates given.

why write the same old same old, if you’re going to write something, write about the ancients or the ori or something equally as bold. why write about stuff that was shone better when each of the series had their time on the telly? Or at best write about alternative universes, but not the same old, same old; some one goes through the wormhole and combats the same old same old, and to survive the battle they use the O’Neil maneuver. It’s like Itachi’s Izanami zapped the lot of them and now, they to are caught in an never ending… Read more »

Reading some of these comments… *shakes head* Instead of being happy that at least the fans care enough about Stargate to carry on, to bring others new stories, all I read here is whining and moaning. A fandom like this really doesn’t deserve any better than to have its show die and be forgotten.

And if you think you can write better, than DO and stop complaining. Fandemonium is a fan based company. Write a book and send it to them. Everybody can whine, why not actually DO something about it instead?

Are they still publishing this rubbish? I gave up on them years ago, my local sci fi bookshop stopped stocking them around the same time. I’ve read a lot of tie-ins in my time but these are truly dreadful, like fan fiction with no beta reader.

I’m new to the books but I’ve read the 1st 2 SG1 books and I’m working on the 3rd. All I can say is they are 1000 times better than the Star Trek Voyager “legacy” series. I do not think those authors ever watched the show. At this point no new TV/Movies are going to be made, we may get one more TV movie at some point in the future if MGM can get straighten out. The best shot for Stargate as a franchise at this point is a soft reboot, new actors/new characters, a new group to follow as… Read more »

I agree mindwarped. I like good science fiction – Niven, Pournelle, Bova to name a few – and these are variable in quality, but all have been worth a read. Some have been quite well-written and imaginative. At any rate, they’re the only game in town as far as StarGate is concerned. It is not going to get any better than that.

I suppose it was wishful thinking to hope that Fandemonium would follow through on their promise and release Oceans of Dust on 14.6.12. Well it’s NOT available – yet again – that makes eighteen months of broken promises or more (I’ve lost count). I hear rumours that MGM are the culprits. All I can say is it’s no wonder they went bust with a deplorable record like that. Yet it was Fandemoniums email that alerted me to the 14.June release date. Sigh they realy hate us fans don’t they – or should I say former fan.

I just bought Oceans of Dust on Kindle. Looks like they are pretty close to schedule after all.

Well, after eighteen months of failed promises Oceans of Dust is available … to those with a kindle. Hard copies are still gonna be delayed and are NOT available until at least July 16 NOT June 14 as (once again) promised. I suppose those with a kindle will be happy. I’m still smarting over the endless, ENDLESS broken promises. Hope the book isn’t rubbish like some of the others Fandemonium have put out.

I’m about 40% into the book and so far I don’t think that it compares well with others in the series. I don’t have a Kindle. Don’t need one. The books can be read on any computer or even an android phone.

Oceans of Dust as a hard copy has been pushed back AGAIN to mid September. No word indeed no sign of the promised Heart’s Desire due out in under two weeks.

I have read all the books in the series and i am waiting for book 6 of the legacy series and can not wait for it. The Drift was suppose to be released last month and I have not heard a word nor do I know who to ask about it. anyone know anything?

Alyssa, Diana just posted an update on The Drift (including a preview). Sounds like it should be available in the next couple of weeks!

Darren, thanks for the info on The Drift, anything on the legacy series, book 6? or any other info on other books to be released