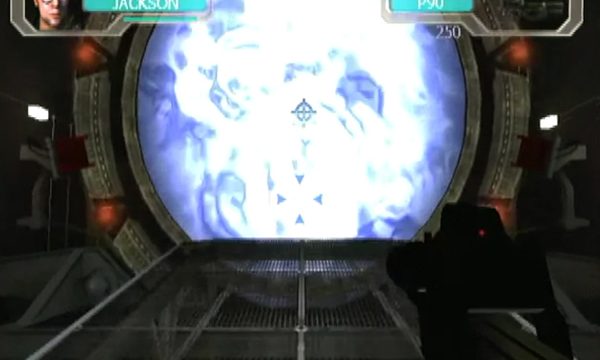 Whatever happened to all the work that went into Stargate SG-1: The Alliance? Perception Studios acquired the license for a Stargate video game and made great headway in its development before the whole thing fell apart circa 2006. But a few copies of the unfinished beta are in circulation.

The folks at Past to Present Online have been playing through the game and posting videos of the experience, giving Stargate fans a firsthand look at the game that didn’t quite make it to market. A couple of segments are embedded below.

Note that this was a few years before Stargate Worlds, another ambitious project that did not reach completion. 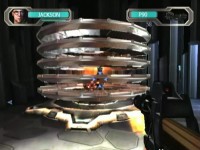 A first-person shooter set during SG-1‘s eighth season, The Alliance was so promising because it included voice acting from the whole cast of the show (including the late Don S. Davis), as well as a number of prominent guest stars. (Carmen Argenziano reprises his role of Jacob Carter in the second clip below; Gary Jones voices Walter Harriman.) It adds a nice air of authenticity to the unfolding story.

The game was to be released for the PC, PlayStation 2, and the original Xbox.

Again, the game was unfinished, so in addition to fairly low-resolution models you’ll notice some missing items and effects (like the desk of computers in the S.G.C. Control Room, and the zat gun’s energy discharge).

Read more about the game in GateWorld’s Video Games section, and find more at Past to Present Online!

UPDATE: The videos have been pulled. See the comments thread below.

UPDATE 2: The videos have been replaced below with higher-quality versions from the PC build of the game. Thanks again to the guys at Past to Present! (We’ve also added the previously released 3-minute trailer for the game, below.)

hmmmm…. Hammond is still around despite Teal’c having hair, this must be the Universe with the “invisible O’Neill” scene :P

How old is this game? Or is it fanmade?

Noldor: It was made by an Australian game studio under license from MGM, and ceased production in late 2005.

Darren: It might help to read the article before i wrote a comment. :) Too bad they didnt finish it..

I would love to see a Stargate game made in a same way as Mass Effect (hint for TPTB and BioWare). It could be a great way to complete and add up to unfinished sagas of Atlantis, and dare I say it, Universe. And it may also be easier to get the original cast to do voice acting for a couple of days than to do movies…

@tikarjal I totally agree. im about half way through mass effect 2. It reminds me alot of Sg. especially illium( looks alot like atlantis). one of the best games ive ever played (besides fallout 3). I would love it if they made a Sg game. there is so much potential there. Is there any way to buy the beta of this game it looks awesome. very good graphics for a ps2 game.

Another review site got this game and are putting videos out of it? Jeez, how do I get a copy of it? I’m so freaking jealous even if the game is unfinished and rough in a lot of areas.

Jedi- the story to the game is that Jack is forced back into the field by the President.

Ben – I’m not a review site. I search for this sort of game to preserve them, The Alliance isn’t the first game, and it certainly won’t be the last :P

YES hopefully this will spur some more interest in a fully-fledged stargate game one day.

I made a clip a few years ago showing off the SG weapons from a fan-made stargate mod: http://www.youtube.com/watch?v=ywMlx56La2o

Sorry guys, had to pull the footage out of respect for the developers. Newer, more complete footage coming soon though!

Videos are in private mode :(

Don’t worry new videos should hopefully be up today. I truly apologize for the problem.

I’m glad I saw them when I did. I’ll look forward to the updated ones – it was almost like seeing a new SG1 episode – not because of the graphics, nonono – just because it was all something I hadn’t seen before. Miss SG1 most. but also SGU and SGA) LOL!

Hey, The Xbox version wasn’t as complete as the PC version, this guy has interviews, screen shots, and play through the first 3 levels of the game.

Proper PC footage is uploading to my website now.

I’ve got original concept art, and 3 videos from an E3 playthrough, if anyone’s interested.

hello guys. I had been reading articles and listening to podcasts on site for a few years now. This is the first time i write on site:) good job all of you.

I would play this game in a heartbeat, but on PC, since I don’t have a Play Station or XBox.

Very cool! I never knew there were videos beyond the trailer and the behind the scenes from the DVD. Does this update differ contentwise from the previous videos?

Since there not ever gonna release this game anybody got a DL link?

There won’t be any download links, sorry. Still illegal.

this is the internets after all, and eventually someone’ll release something from somewhere. wait, hold on; i’m a user of the deeper web, hah, i’ll check

Everyone is a user of the deep web.

And the PC build certainly won’t be leaked. The Xbox build is more likely since it has been through more hands, but if everyone holds their word, it won’t be released, ever.

This looks pretty far along, I’m amazed MGM hasn’t thrown some extra change at it to have somebody shine it up enough for a digital release.

yeah, i think they should do that too, it looks like it is a good candidate for a Duke Nukem forever resurrection!

I think the only successful SG game was on the Super-Nintendo lol, anything else after that has been cursed and it look’s like there will be no other. I personally would of preferred a Command & Conquer style game of SG that would totally brilliant.

Dear god don’t be a hint for Bioware. They shouldn’t be a mile within franchise, not after the garbage job they’ve done with every title since EA got involved.

If they’ve saved the original cast’s voice recordings, there is always a chance that the game could be remade into a modern Call of Duty type game. The hard part of getting the cast together has already been accomplished.

Shame that this game didn’t get to see the day. I would have loved to play it, even with its old graphics.

“And the PC build certainly won’t be leaked. The Xbox build is more likely since it has been through more hands, but if everyone holds their word, it won’t be released, ever.” Typical hoarder mentality. It’s okay for the select few to possess it, but heaven forbid it becomes more widely available. I don’t typically support piracy, but things like this, where no one loses out (i.e. companies/creative types losing sales) and no one can experience it any other way… It should be available for fans to experience, preserved for anyone and everyone who wants to experience it in the… Read more »

I agree with Stoko… :) They didn’t care about Stargate franchise…

I agree, release the game already.

They should try to re-make it, let the original creators of halo and eldar scrolls get a hold of it. The possibilities for a game like this is literally endless and it would be a great way to attract attention to the show and maybe get something going to get the show going again. They want more fans then the multi-billion dollar video game industry is the way to go.