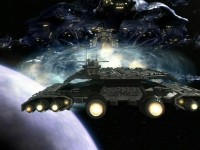 Thanks to everyone for voting in the Atlantis Season Two Awards! Here are the complete vote results for all of the nominees. (See the award winners here.)

Nominations and voting for the best of SGA Season Three will take place in August 2012.

Keeping a promise he made to the captain of the Aurora, John makes a toast to the fallen crew of Ancients. (“Aurora”) (25%)

Sheppard uses a Wraith dart to escape a hive ship and gets it fighting with a second hive, leading to the destruction of both enemy vessels. (“The Hive”) (49%)

McKay’s arrogance and over-confidence catch up with him as he fails to control an Ancient power-generation experiment and blows up a solar system. (“Trinity”) (30%)

While trapped in a sinking Puddle Jumper beneath Lantea’s great ocean, McKay creates an hallucination of an old friend — a sexy Samantha Carter — to help him survive. (“Grace Under Pressure”) (48%)

McKay explains his brilliant plan to escape the eruption of a super-volcano and save both the Taranians and their Ancient warship. (“Inferno”) (22%)

Teyla takes Ronon to task for abusing her trust and using her to kill his former Satedan commander, but agrees not to tell their teammates. (“Trinity”) (25%)

After Charin, the woman Teyla considers to be her last living relative, dies, Teyla honors her memory by performing the Ring Ceremony over her body. (“Critical Mass”) (46%)

Teyla shows compassion toward the transformed Wraith Michael, knowing that in truth he is one of her greatest enemies — even when he begins to revert. (“Michael”) (29%)

The team meets Ronon for the first time when the Runner captures Sheppard and Teyla, eventually telling them who and what he is. (“Runner”) (34.1%)

Weakened by surgery to remove the Wraith’s tracker, Ronon chases down and fights an enzyme-enhanced Lt. Ford. (“Runner”) (32.7%)

After learning that his former commander, Kell, survived the Wraith attack, Ronon shoots the man dead as retribution for leaving his own people to die. (“Trinity”) (33.2%)

Weir risks her well-being to check on Colonel Sheppard during his transformation into a bug-like creature. (“Conversion”) (23.5%)

Suspecting that Kavanagh may be a spy working for the Trust, Weir must decide whether to subject him to torture or risk the destruction of Atlantis. (“Critical Mass”) (38.2%)

Taken over by a vengeful alien entity, Weir manipulates her people to get at another entity that has possessed Colonel Sheppard. (“The Long Goodbye”) (38.3%)

Dr. Beckett goes off-world on a “house call” to remove Ronon’s tracking device, not knowing if the alien warrior can be trusted. (“Runner”) (31%)

Beckett receives a passionate kiss from Laura Cadman — who is still in Rodney’s body — who has had a crush on him since her arrival in Atlantis. (“Duet”) (49%)

Beckett introduces an experimental anti-Wraith retrovirus in the hopes of helping a Wraith girl who wishes to be human, only to have her steal it — with tragic consequences. (“Instinct”) (20%)

The Atlantis team members each do their part to execute a daring plan, hiding the city from the Wraith by faking its destruction. (“The Siege, Part 3”) (44%)

The team is reunited with Sheppard while rescuing him from a time-dilation field, helping a group of Ancients defeat an invisible beast and ascend. (“Epiphany”) (24%)

Atlantis joins Stargate Command and the Daedalus crew to uncover the identity of a Goa’uld who has planted a bomb in Atlantis. (“Critical Mass”) (32%)

(Percentages are rounded to the nearest full point, so results for each category won’t always add up to an even 100%. Those with an equal percentage of votes after rounding are listed in their winning order based on actual votes.)

i would like to know why your are not continuing Atlantac. me and my family love this program and hope that you reconsider and continue this program it is very interesting

@sundown you do know this is a fansite and not an official method of talking with the creators of the Atlantis series, right? It’s sad that most people think Ronon’s best moment was his introduction. Guess it shows this season he didn’t have much. And Weir being possessed is a Weir moment? Maybe an good Torri Higginson moment. I think the shippers are taking over the poll with the Weir moment hinting at Sheppard and her kissing and the McKay & Beckett kiss being the the top vote. Why are people rallying at Ronon’s gun being cool? It’s a phaser… Read more »

This poll is simply a fun way to, as a group, review a group of series that we all enjoyed. It’s best viewed in that perspective. In our diversity, we all have different characters and aspects of the series that we enjoy more than others. It’s a large part of what contributed to the success of the franchise.

Congrats to the winners! Most of what I voted for didn’t win, but it’s all in fun!

Wow, I think this is the first time almost everything I voted for didn’t win. Also, I agree with the two above on being confused about Weir being possessed being a Weir moment.

@The_Elite_Elite-
I agree with you… one of the reasons why I haven’t voted these past few ballots.

I agree with Sylvia that it’s all in good fun regardless, but *my goodness*… am I that out of sync with the rest of Gate fandom these days?