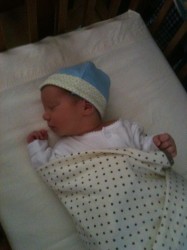 Despite that fact, we’re sure the actor was quite attentive in the delivery room as McGillion and his wife Courtney welcomed their first child — a baby boy — into the world last weekend.   Hugh Terence Philip McGillion was born last Sunday, August 5 — weighing in at 7 pounds and 4 ounces.

GateWorld chatted exclusively with McGillion earlier today about the new arrival, and it’s clear how beaming and proud he is of the couples’ brand-new addition.

“To be honest, this past week has been a bit of a fog,” McGillion said.  “But it’s amazing being a dad,  and both Hugh and Courtney are doing great!  We named him after my grandfather, actually.  And — if you can believe this — he’s got this little tuft of hair that looks like it belongs on Carson Beckett!”

For those who are South Park fans, we’ll be the first to clear the air now:  Hugh’s middle names were not inspired by the Canadian characters in the long running Comedy Central animated series.

“We’ll probably never use those names, it’s just a family tradition,” McGillion explains.  “Terence is my brother’s name, and Philip was the name of Courtney’s dad.”

You can send your well-wishes to Paul and family on Twitter at @PaulyMcGillion — or you can congratulate him face-to-face this weekend when he is a guest at Creation Entertainment’s Official Stargate Convention in Chicago where he’ll join in the convention fun with fellow Atlantis actors Joe Flanigan (“Col. John Sheppard”), Torri Higginson (“Elizabeth Weir”), Robert Picardo (“Richard Woolsey”), Jewel Staite (“Dr. Jennifer Keller”), Kate Hewlett (“Jeannie Miller”), and more!

Keep your browsers locked to GateWorld in the weeks to come!  A full-length chat with Paul McGillion where he talks about all his latest projects (including Baby Hugh) is on its way this Fall!

Special thanks to Paul for supplying us with photos of  Hugh! 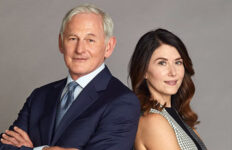 Congratulations, Paul!! I hope you’re reading and know that we all support you in your adventure as dad!

Wonderful, and those of us who will be meeting him this weekend at the convention will get to congratulate him in person. How exciting!

These are the pieces of Gateworld news I love the most. – Hugh’s a cute wee bairn. Cograts to Mr & Mrs McGillion on their new family! :-)