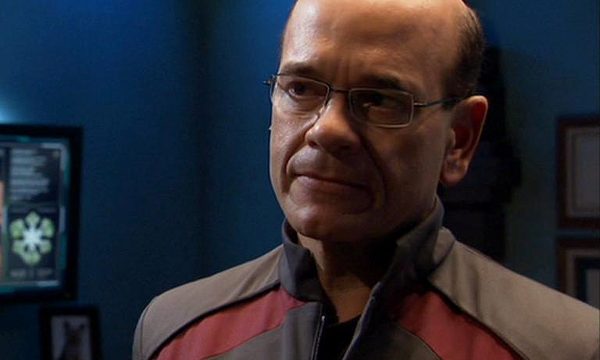 We’ve been rewatching every episode, every season of Stargate for more than a year now, and the Stargate Rewatch has finally arrived at the end of Stargate Atlantis! All through October Rewatchers will be enjoying the final 20 episodes of the series.

Here’s your intro to the season, with links to all the related SGA goodness on GateWorld! Learn more about the Stargate Rewatch and how you can participate in the final stretch.

With Teyla still missing, Colonel Sheppard and the rest of the team manage to rescue her from Michael’s clutches — just as she gives birth to her son. But the Wraith hybrid still has his sights set on the child. Meanwhile Carson Beckett is out of stasis, Keller is ready to start live trials of a new retrovirus that could free the Wraith of the need to feed on humans, and a mysterious and powerful new species invades the city and takes Drs. Rodney McKay and Daniel Jackson prisoner.

Change is once again in the air in Atlantis, as Colonel Carter is reassigned and the expedition given a new commander: a civilian, the I.O.A. executive Richard Woolsey (actor Robert Picardo). The team is called to answer for the decisions they have made on behalf of the entire Pegasus Galaxy, and a Wraith with a powerful new hive ship finds a way to attack Earth.

Come back in a couple of weeks to cast your ballot for this month’s final round of Stargate Atlantis Awards!

worst season of stargate period. they new the show was on its last legs. and they just continued to milk and stretch it out even more in this season. they could have ended it.

A good season. Ex. Vegas and Enemy at the gate is two of the best episodes all in all. Too bad it ended there..

this season was awesome. i agree with kyle that SGU season one was horrible. but they really made a comeback in season 2. i was actually sad that it was cancelled whereas i wouldnt have cared if it was cancelled after season 1

This season was great and yes the first season of SGU was bad, but any first season isn’t the best. Look at Sg-1’s. It was a new show and the people were still trying to find it. But this was a good season. Teyla as a wraith is coo land creept atthe same time. Woolsey grew from a two bit character to someone great and admired. I would have loved to see that character develop some more as leader of Atlantis.

This season was wildly uneven–some good shows, many bad ones. As Atlantis goes, I’d say it’s very much the worst.

I know most people don’t agree, but I thought the fourth season was the worst “Atlantis” season, with the fifth season being the second worst. There were some great episodes in Season 4, sure, but there were also quite a few mediocre ones and a very bad one (“Harmony”, specifically). But while, Season 5 had its ups and downs, I never felt that there were any bad episodes in it and there were a lot less mediocre ones, compared to the previous season.

if there’s one thing that anyos me about season 5 its the ending that always anyoed me they didn’t finish it well.