Over the course of Stargate‘s history on television screens, several characters (many of them fan favorites) have made their final exits through one form of death or another. We don’t mean a Daniel Jackson-style death where it doesn’t stick and by the end of the episode (or season) he’s alive and well. We mean the ones that were permanent. Be it the end of that character’s story arc or merely trying to serve a dramatic function, those deaths stayed with us. Skaara in SG-1‘s “Full Circle”. Janet Frasier in the same series’ “Heroes” two-parter. And although he eventually returned through the miracle of sci-fi storytelling, it doesn’t make Carson Beckett‘s final scenes in “Sunday” any less gut-wrenching or emotional. And that last event would make Atlantis‘ next character loss even more profound.

When last GateWorld talked with actress Torri Higginson, who portrayed Atlantis’ civilian expedition leader Dr. Elizabeth Weir, it was while she was just finishing up the first handful of episodes in Season Four — a season that would reduce her character to a recurring status before essentially killing her off. And while her exit from the series (both on-screen and off) may not have gone as smoothly as anyone would have liked, time heals all wounds and Higginson’s (who went on to more mainstream fare like NCIS) are no exception.

After a long absence from our pages, we finally caught up with Torri last fall at the Chicago Offical Stargate Convention hosted by Creation Entertainment. In our interview, Torri Higginson chats with us about the current state of the franchise, her personal feelings on Weir’s unceremonious exit, the impact of the character and the franchise itself, what she’s up to currently, and more!

GateWorld: It’s actually been five long years now since the last time the site talked to you. How are you? How have you been?

GW: [Laughter] That’s probably a better thing. Now being outside the genre – that helps a little bit.

GW: Do you still have Sedgewick?

Actually, it’s so funny. I was on … I asked some questions at the Q&A [at the Chicago convention] back to the audience and one of them was going to be about my dog. And I couldn’t remember how many episodes she did. So I went online to double check that. And I didn’t know she has a … I guess somewhere on the net, she has like a wiki page and she’s actually got her own little page. But she is called a he. I thought, “How do I correct your grammar?” It’s all wrong. 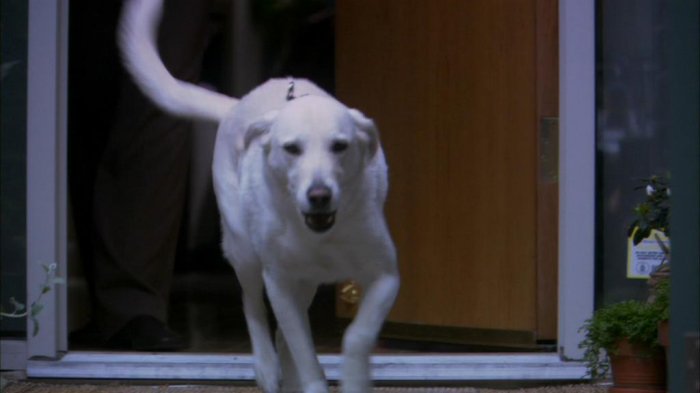 To clear up any confusion going forward, Higginson wishes it to be known on the record that her dog Sedgewick is, in fact, female.

GW: [Laughter] We can fix that. Knowledge is power.

GW: 2012 is really the first full year where there isn’t any Stargate on the television landscape for the first time in fifteen years.

TH: How are people dealing with that?

GW: They’re missing it quite a bit.

What are your thoughts on the fact that something that was so vibrantly alive just a few years ago is kind of in a state of dormancy right now?

TH: I’m surprised. I’m very surprised because it does seem like such a strong franchise. But I also know, I mean, the business is … it’s also amazing that the first show went ten years. I mean, it’s such a rare thing in this industry.

GW: You think that’s more the economics of just the television landscape in general right now or … ?

TH: I think you’re probably right. I mean, I know in Los Angeles there used to be, I think, two to three hundred shot every month and now there’s about 27 things filming.

GW: And studios are more resistant to taking on new properties that, you know, aren’t proven to where they’re going to actually make them money …

And it does seem like Hollywood, especially with the movies, they’re just doing nothing but remakes and part twos, part threes and that kind of thing. So, with that theory, then, why aren’t there Stargate movies? I’m not sure.

GW: The last time that we talked to you was actually just as you were filming the first few episodes of Season Four. Which was kind of providing a little bit of closure for the Weir character. Obviously, we know behind the scenes that there was some stuff going on. And at the time, at the beginning of Season Four, you had talked about the fact that you kind of understood the reasons why they were making the changes that they had.

We see you in a cameo mid-way through the season, at the end of “Be All My Sins Remember’d”. That’s never followed up on. Did you just … are you able to talk at all at liberty as far as …? 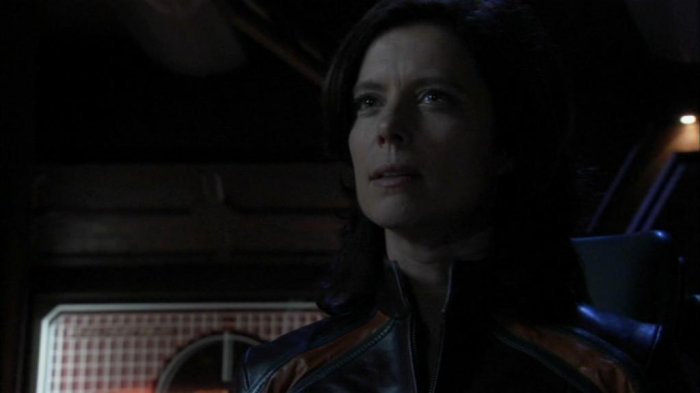 Higginson in the final moments of Atlantis Season Four episode “Be All My Sins Remember’d”. The episode would be her last contribution to the series and franchise.

TH: Yeah. I didn’t sign anything. And, also, I don’t know anything. I mean, I don’t know. They asked me to come back in Season Five to do a little part. And I remember saying to them at that point, “I would love to know what you’re planning to do with this character because I feel right now she’s just floating in space.”

And I feel it’s sort of disrespectful to her because I think she deserved more of a closure. And I really like Dr. Weir. And I didn’t like how she kept sort of being brought in and killed and just sort of hung out to float until they brought her back again.

GW: And, ironically, that’s how the character …

TH: That was exactly what they were going to be doing with her. So, I said, “You know, I’d be happy to come back, but can you tell me if this is going to tie it up? Can we tie it up?”

Also for the fans. I was getting letters from fans and people going, “What’s going on?” I’m like, “I don’t know, I don’t know.” And, you know, I have no right to this opinion but I sort of felt like were they using her a bit as a carrot to keep some of her loyal fans there. I’m not sure. That’s, maybe, arrogant even of me to suggest. But I just sort of felt out of respect for the character and out of respect for the fans I wanted them to tie it up. And they weren’t willing to tell me if that’s what they were planning to do.

And, yeah, I think my ego just kind of said, “I don’t want to just zip in and be floating in space again.”

NEXT: Stage work versus screen work, and the legacy Elizabeth Weir (and the franchise) leaves behind…

Torri’s such a sweetheart! Good luck to her! And thanks for the interview.

I changed the stargate wikia

She is a class act. No disrespect to the others that followed but her character was just fine to begin with. You gotta love the “business” of TV.

It would be funny if a convention got all of the actresses that played Weir up on a stage together including Jessica Steen, who played Weir before Torri Higginson.

Thanks Torri.
You played a great role in Stargate Atlantis and made it your own.

No disrespect to Amanda but Robert and Torri suited the leader of Atlantis role so well.

Which is surprising for Robert’s character as he was a …. in SG1 and only started being nicer towards the end.

Chad, thank you for doing this interview. It was a pleasure to meet her last summer (and you, of course!). I keep raving to my boyfriend about how awesome she was, and he said “I’m not surprised, she seemed pretty cool.” I’m working on converting him to Atlantis as well, since he is so hardcore SG-1. We’re both coming to the Con in August 2013 (yes, new boyfriend who wants to attend his first Con, this should be great), so I’m psyched that he will get to see what I’m talking about. My photo-op with her and Kate Hewlett and… Read more »

As a quiet but enthusiastic fan of Torri Higginson and Elizabeth Weir, thank you thank you thank you in doing this interview. The others who filled her position did fine jobs, but as I clicked so strongly with her I was sad the way her departure was handled. Like the poster above me, I’m rewatching Atlantis and will be sad again, but I’m thrilled to see this new interview and I’ll see if I can attend her Houston con too. I haven’t seen her in person yet, just youtube clips of conventions and panels. Jedi_Master_Bra’tac, thanks for changing the stargate… Read more »

The good question is if the would work in Stargate Extintion. Sue’s the soul of Atlantis.

This old heart will always remember Torri as the true soul of SGA.

IMO, the interview above showed *why*.

With all due respect to Tapping (and her contract with the franchise), her Carter character just did not belong in that post as admin for that station; and, behind the screen, the showrunners seemed to not think clearly enough on what to do with Wier’s (and Ford’s, and Beckett’s, and Keller’s) character from a certain point in the series– and it showed up in ways too painful to watch.

Thanks again for attempting to maintain SGA’s soul then, Torri…

Torri made ATLANTIS. The interaction with Sheppard was – well, just look at all the YouTube videos dedicated to them. Torri, if you’re reading these, please accept more “meet & greets” to give all of us a chance to see you.

I haven’t loved a female character this much since Carter, on SG1. I was always hopful the writers of the show would further expand on Weir’s duties, and off-time activities, ect. Sadly, that never happened; but Weir lives on through the hearts, and minds of the fans who love her. I hope I get the chance to meet you in person someday; and if I can get a picture with Higginson, I’ll sit it on my mantle! It is so rare to encounter a character portayed by an actress who has that special, “something” about them; and Torri is one… Read more »