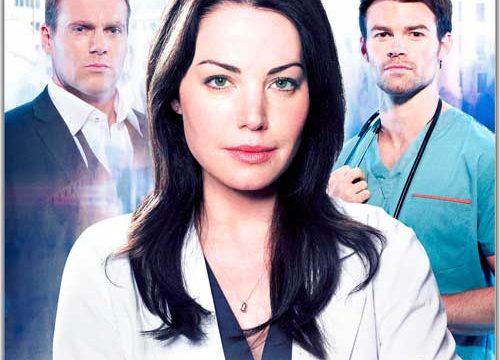 It’s been quite some time since fans of “Daniel Jackson” portrayer Michael Shanks have been able to purchase a new season of a TV series that features him extensively.  In fact, if you aren’t counting his guest turns on the CW series Smallville, you’d have to go all the way back to the Season Ten release of Stargate SG-1 back in 2007.  But for those hungry for more, the wait is almost over.

Our friends over at TV Shows on DVD are reporting that before summer rolls around, you’ll be able to purchase Season One of Shanks’ newest series Saving Hope, as it currently is scheduled for release on May 21.

The medical drama, produced by Canadian broadcaster CTV, aired last summer.  Stateside, NBC also broadcasted the 13-episode inaugural season but inexplicably made the decision to shelve the final two episodes save for streaming them online.  While Season Two of the series has already been commissioned by CTV (with an expanded eighteen episode order), there are no definitive plans as of yet for NBC or any other American networks to air them.

In advance of the DVD release (no Blu-ray format release has been announced), GateWorld got in touch with Shanks to talk about Saving Hope, a series that it is clear the actor is proud of — especially considering how genre-heavy his career has been prior to this project.

“It’s much more about the relationships and the characters, than most of the shows that I’ve shot before,” Shanks said.  “That’s the one thing I’ve noticed prominently with both the audience’s reception of it and the making of it.  That when we don’t get our characters and our relationships right, those scenes just don’t work.  Dialogue scenes and stuff like that.  The scenes you crave when you are doing an action adventure show.  I think Stargate Universe was the one that got closest to actually doing that.”

“[On SG-1], it was something our writers always discussed.  We would get a script draft, and there would be a scene where two characters are bonding about something. And then the next draft would come out and that would be gone,” Shanks continued. “We’d go ‘Why is that gone?’ and we’d hear ‘We can’t fit it in because we have to get to such and such by Act Two or such and such by Act Three.’  With Saving Hope, there’s none of that. Its more about the characters and the relationships. And if we get that wrong, we’re dead. We have no spaceships and alien battles to fight.”

Shanks and co-star Erica Durance in a scene from the series.

Part of the series’ success thus far also lies with his Saving Hope co-star (and fellow Stargate and Smallville alum) Erica Durance.  Shanks is quick to heap praise on her performance and the kind of trust between actors that it engenders.

“There was a natural trust that we had with each other,” Shanks said.  “Both for the stuff where you’re doing intimate scenes, and also for the stuff where you’re having to cry and weep over that person. We’re helpful with each other. We help get each other. She’d helped me to get to some great places in scenes and I’ve helped her as well. So there is a great mutual reciprocation there and a great trust and friendship as well.  Absolutely, the time on Stargate SG-1 and Smallville and all the times in between, our sort of natural friendship has come to the fore with that. It’s been very helpful.”

Season One of Saving Hope on DVD is currently available for pre-order from Amazon.  Click this link

For more thoughts from Shanks, including more details on Saving Hope, his thoughts on the television landscape without any Stargate airing, and details on his upcoming film efforts for both the big (August’s Elysium with Matt Damon and Jodie Foster) and small screens (Hallmark’s Mr. Hockey: The Gordie Howe Story in May [story]), keep your browser locked to GateWorld.  A brand new, full-length interview with Michael Shanks is headed your way later this month!

It probably won’t be back on NBC. It’s really too bad because it’s a good show. This is the second time NBC has licensed a good Canadian show to fill their summer slot and then not brought it back. They did the same thing with The Listener it it’s first season. They stopped showing it with 2 episodes left of the season that they only showed online and didn’t renew. The Listener is about to start it’s 4th season.

Michael Shanks had a memorable four episode run on Burn Notice in 2008-2009.