Before showing up as a recurring character on Stargate SG-1 and later on joining the regular cast of the final season of Stargate Atlantis, actor Robert Picardo had already more than established his genre film and television credentials.  Sure, most of us know that he spent seven years as the Emergency Medical Hologram on Star Trek: Voyager — but his industry credits stretch back more than 30 years with stints in horror and sci-fi projects like Gremlins II: The New Batch, InnerSpace, and the original Total Recall.  In addition, he also has made his presence known in a wide array of more contemporary projects for television including period dramas like The Wonder Years and China Beach.

The Italian work ethic instilled in him growing up in Philadelphia extends to today, as Picardo remains extremely busy in both film and recurring TV roles — which makes the fact GateWorld finally caught up with him recently (both over the phone and as a guest during Creation Entertainment‘s Official Stargate Convention) all the more impressive.

In our exclusive chat with Robert Picardo, he discusses the current state of the Stargate franchise, why the character of Richard Woolsey connected with audiences, stepping back into that character shoes for SGU, the wide assortment of projects he’s attached to that have just released or are forthcoming, and more!

GateWorld: For GateWorld.net I’m Chad Colvin. And I have the pleasure of speaking this afternoon with Robert Picardo.

GW: Bob, thanks for taking the time to talk to us again! It’s been a few years.

RP: It’s my pleasure. Thank you very much.

GW: You’re actually one of the hardest working men in Hollywood, I think. You’ve been very busy as of late.

RP: Thank you very much. Yes, I have been very busy. And it’s a nice feeling. I’ve also been travelling a lot as you know. I’ve been active in both Stargate and Star Trek conventions lately…here in the States and internationally.

GW: I’ve brought this up in several of my interviews lately, and I’m very interested in your take on it. Last year was the first full year where there wasn’t any Stargate of any type on the television landscape at all. What are your thoughts about where the franchise is at now compared to just a few years back when it was really thriving?

RP: Well, we all know that MGM has had its financial woes which is why, I suppose, the franchise is in a state of suspended animation. I know that it’s a very valuable brand name. And that sooner or later MGM will have the available cash and the leadership to realize that they shouldn’t let such a valuable property go silent for much longer.

It is a … it’s really a shame. I was a big, big Universe fan. I know that … I know that Universe was very different from SG-1 and Atlantis. And that some of the fans didn’t initially take to it because it was so much less of a fourth wall show. Where there wasn’t that sort of characteristic “winking at the camera” kind of humor that was a trademark of the first two Stargate series. I think the fact that Richard Dean Anderson let the audience in on that tongue-in-cheek persona really established the first show.

So, I understand that it was a different kind of Stargate. But the cast was across the board great. I really enjoyed the storytelling. And I was sorry it didn’t get a bit longer time to prove itself.

Also, of course, I was disappointed that I only got to command the Atlantis expedition for the fifth and final year. I was hoping that since Woolsey had finally managed to slap himself into a leader that maybe he would get another season to kind of … to show how much he’d learned. But it was still a great ride. And a wonderful arc for that character who had been introduced as such an unpleasant and kind of colorless, unlikeable guy to really transform over the course of those years.

GW: If you really go back to the arc of Woolsey back with Season Seven in SG-1 to where he ends up at the end of Atlantis, it’s almost like a completely different character in some respects.

RP: Well, in some respects, yes. I don’t think they ever expected to bring him back beyond his first appearance where he was very much … if not a villain … he was just a hard-nosed kind of …investigator … military …

RP: Yeah, exactly! You know, “Who screwed up here? Let me find out and their head will roll. That’s the only reason I’m here. Nobody’s supposed to like me. You’re all supposed to fear me.”

So it was not a very … what’s the word … propitious beginning for a character. But because I think the show runners liked me – not only Brad [Wright] and Robert [Cooper], but specifically Joe Mallozzi and Paul Mullie – as an actor. They sort of liked having me around the coffee table. And so they decided to start bringing me back and every time they did Woolsey had a glimmer of a positive character trait.

GW: The last time that we talked on the record was actually before SGU’s “Seizure” had aired. What was it like having that sort of coda on the character? Stepping into Woolsey’s shoes one last time and getting to reunite on screen with David [Hewlett]? 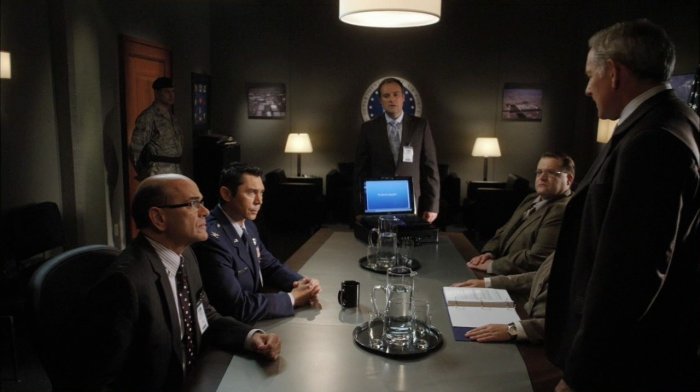 The SGU episode “Seizure” served as a mini-Atlantis reunion for Picardo and David Hewlett.

RP: It was … it was wonderful, obviously, to reunite with David. He makes me laugh more than almost any other actor I’ve ever worked with.

We had a great time. His character, I think, was more difficult to transition into a very dramatic show where there wasn’t that sort of winking at the camera that we were free to do in Atlantis. I think perhaps appearing in that show was somewhat more of a challenge — in a way — for his role than mine. Because Woolsey had been introduced as a very dramatic character and so I was very comfortable in that setting.

But David is — so much of David’s character is associated with humor and that rapid-fire delivery and his attitude. So I think it was probably … he may have been even a bit more concerned than me as far as transitioning into that new universe, if you’ll excuse the pun, of Stargate.

But it was great fun to work with him. And really, really nice to work with Louis [Ferreira] and Lou Diamond Phillips – both Lou’s. The cast was very welcoming to us, and treated us great. It was really just a fun experience – and I thought the episode turned out great!

NEXT:  Picardo discusses a plethora of his recent television, film (and audio) projects, plus a message for fans!

Now all Mr. Picardo needs to do is get a part in one of the Star Wars movies and he will have every major sci-fi franchise covered.

nice interview of a nice guy. :)

A class act that Mr. Picardo.

I don’t leave comments very often but can I just say that after witnessing JJ have another movement on the big big Imax screen this past week, I had to go and do a Stargate marathon to remind myself what good sci-fi enterainment is supposed to be.

Picard is always great and like the others I to miss SGU.

Robert Picardo is a great actor, singer, and all-around nice guy. He takes his profession seriously and has fun at the same time. And, most importantly, he’s from Philadelphia, my hometown! So what’s not to like? :-)

I agree with those above, this entire interview shows what a class-act Robert Picardo is. Have always enjoyed his roles as The Doctor and Woolsey since ’95!

Keep it up sir!

I just adore Robert Picardo; I’ve followed him since Voyager and I think that his development as the Woolsey characted in the Stargate universe has been awesome! I am as sad as everyone else we only got to see Woolsey command Atlantis for one year, but it was a great year, and RP is a class act and such a wonderful addition to the SG family…I’ve lurked Gateworld for 13 years(-ish), and I took the time to create a log in just to post a comment on this interview. Thanks for bringing this to us:)

Thanks so much, KW! Glad that this interview finally drew you out of lurkerdom. Thanks for posting.

As I was prepping this interview I was regretting the fact that we only had Woolsey in charge of Atlantis for one season, and wondering what a second or third year of his command might have looked like.

His evolution was the largest metamorphosis of a character that I’ve seen in a series. There was still a lot of room left in his development. He might be the most entertaining character dreamed up in the entire franchise. He had the ability to provide a serious foil to the other players or even to provide a comic foil with the character’s eccentricities. It’s no wonder that he enjoyed this gig.

He is a really great actor.