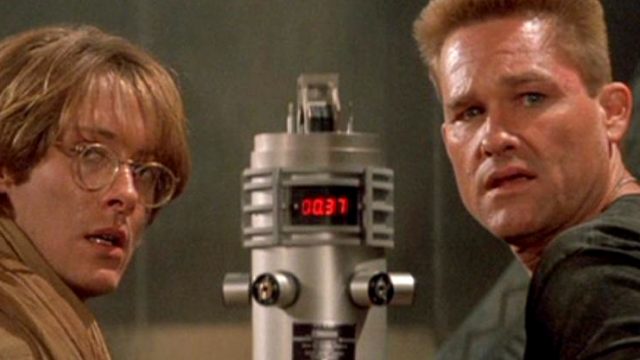 In anticipation of the upcoming Stargate movie trilogy, each week GateWorld offers its best guess at nagging questions about the upcoming films. Stay tuned, and post your suggested questions below.

If the Stargate franchise is returning to the original well, can fans expect to see the original Jack O’Neil (one L!) and Daniel Jackson back on the big screen?

Despite Dean Devlin’s recent use of the word “reboot,” it remains to be seen if the next Stargate movie will begin again at the beginning and tell the story of the Gate’s discovery and first activation, or if it will pick up more than 20 years after the original with a new team of characters.

In either case, it is of course possible that James Spader or Kurt Russell may put in an appearance — but very unlikely that they would star. In the case of a reboot, they could cameo as different characters. The new team could have a new Jack and Daniel with a younger cast — or those two characters might be left out altogether.

Or, in the case of a continuation, Russell’s O’Neill could turn up as a seasoned veteran to advise a new team (General O’Neil, anyone?). A return trip to Abydos might see an aged Daniel who has lived there most of his adult life.

Based on his critical remarks about the 1994 film in years past, it wouldn’t surprise us if Spader opted out of any participation. But Russell would provide some really great continuity with the original film, especially since his character was the one who returned home to Earth.

Devlin does seem to be pointing to a restart of the whole story. “Twenty years later, we can’t really do part two,” he told the Portland Business Journal. “We have to start over from the beginning. So let’s reboot the series, put in all the things we couldn’t the first time, and set it up properly.” That would indicate either new actors playing young Jack and Daniel, or different characters filling basically the same functions.

That would make any appearance by Russell and Spader in the territory of a cameo (or perhaps a larger supporting role) — but not as Jack or Daniel.

What questions about the new movies would you like us to tackle in future columns? 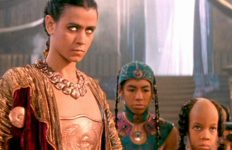 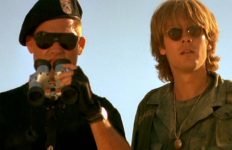 Movie Questions: When Will The Next Stargate Film Arrive?→

my question is why bother going backwards?

will all the awesome and interesting stuff the tv universe set up, why not just go *forward* with that?

i’m sorry, i know i’m not in line with the ‘out with the old, in with the new’ mindset.

Wait a second. Devlin says “So let’s reboot the series”. He says the series, not the movies. Could they be planning to use characters from SG-1? I’m probably reading far too much into it but you never know.

Something that I’m very curious about is in the Gateworld podcast where there was the mention of Egyptian helmet props being made for Stargate. If the movie is so many years away why would props be needed now?

Man I hope not. Either new characters or the SG-1/Atlantis characters

Both are great but we need new actor’s.

Wasn’t it only a few years ago that they were saying the original plan was for there to be a gap of 12 or so years between the first and second films?

I could see Russell being interested if asked. Spader – Definitely not. I suspect that the characters will be recast without bringing back any old faces. I would not mind seeing something new. In fact, I welcome a new approach. If there is not something novel and intriguing in this new entry it will be one and done.

Aaah come on Devlin – lets ditch the movies and spend the budget on several TV movies based on the TV series and then kick off a whole new series. You know it makes sense mate ;)

I’m not sure about the whole premise really, how can you ignore 20 years of cannon just like that?

If he made a film that merged the two that might be ok, as long as it wasn’t this alternate universe line that Star Trek is taking. That’s just a poor excuse to make money out of Jo Public.

“Both are great but we need new actor’s.”

“how can you ignore 20 years of cannon”
Maybe they prefer bazookas.

Hi, I’m new, but a deep SG-1 fan. I have to say I think the TV cast was far better than the leads in original movie. Please. Russell’s “O’Neal” fell way short of Anderson’s “O’Neill”. Why the Hollywood prejudice against TV casts? And I couldn’t see the Spader character growing into Shanks’ Daniel Jackson character which evolved on the TV shows.

From all the interviews, Devlin has something planned BEFORE the SG-1, SGA, SGU series. The original trilogy plans probably did include Jack and Daniel, but I can see them just rename those characters to make a distinction with the TV series that they had absolutely no loyalty to.

“to make a distinction with the TV series that they had absolutely no loyalty to.”

Devlin not only has no loyalty to the tv shows (please forgive the double negative), he has gone out of his way to criticize the shows and make sure that everyone knows he had nothing to do with them.

That being said, I wouldn’t mind a reboot with either Richard Dean Anderson or Kurt Russell (perhaps both?) making brief cameos. I think as bickering generals would be very funny.

“I wouldn’t mind a reboot with either Richard Dean Anderson or Kurt Russell (perhaps both?) making brief cameos. I think as bickering generals would be very funny.”

lol yes lets have them standing and talking in a room and then someone calls a name, “Which?”, “I was just asked to come and get General O’Neil(l).”, “Well you’ve come to the right place, which of us do you want?.”, “I don’t understand Sir?.”, “Well he’s O’Neil and I’m O’Neill…with 2 L’s”. Something like that lol.

If you really hate the movie reboot, think of it as ALTERNATE UNIVERSE!

People who say 20 years of canon shouldn’t be ignored need to understand that the movie and the tv series are entirely different entities. The creators of the movie had nothing to do with the direction the show. In the movie, there is no such thing as the goa’uld, the asgaard, etc. SG1/Atlantis/Universe is basically an alternate universe. If my memory serves me correctly, there was a series of books that were published that follows the narrative of the movie. I wouldn’t be surprised if they went along with that direction. Like many of you though, I would have much… Read more »

himeros, that ‘just take what you can get’ attitude sickens me. Don’t settle! Learn to stand up and lobby for the things you love.

does anyone really want to see Russell or Spader? I would be sad if the movies were not in line with the series, SG-1 and atlantis, and at least have guest appearances of SG-1 characters and Joe and David have substantial role in new movies. It’s not the movie that made stargate what it is, it’s the series..!!

To the people who want to see a SG1 movie sequel. I have one question. How do you create a sequel to killing the most powerful being in the universe, someone with the power that the Goa’uld could only dream of? At the end of SG1 earth had all of the technology of the ancients at its disposal, including weapons so powerful that they could kill beings that could kill us at a glance. Not just kill them but commit genocide on a galactic scale. The only path I could see the story taking after SG1 is similar to DBZ,… Read more »