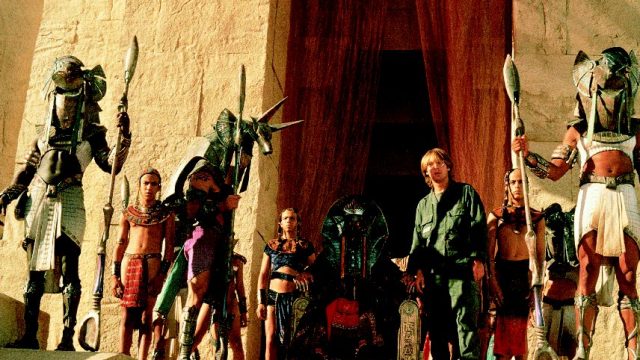 The new Stargate feature film may get a nudge forward in its time table.

Writer-producer Dean Devlin tells Nerd Report that he and director Roland Emmerich are currently working on just one of the Independence Day sequels — and waiting on the third installment for now.

That means that when Stargate rolls around on Emmerich’s directing schedule, it may only have to wait for one Independence Day movie and not two.

“Unfortunately, we have to wait until we finish Independence Day for that,” Devlin said of the Stargate reboot. “Roland wants to direct that one too. Hopefully we go into that right afterwards.”

The delay on a third Independence Day is strategic, Devlin said: “We decided just to do one first to make sure that people like where we’re going. If that works well, there’s an ability to do some world building which would be really fun and interesting to do. I think Roland and everybody felt, let’s just make sure 20 years later that people still are interested.

“I think in our case, we started to feel that maybe we were being a little bit arrogant by assuming that we could do two movies. We said you know what, let’s scale it down. Let’s first make sure that it works for everyone.”

ID Forever: Part 1 is currently scheduled to be released in the U.S. on June 24, 2016. So our guess that Stargate could arrive no earlier than the summer of 2017 is still holding.

Keep it locked on GateWorld for the latest on the planned trilogy of Stargate movies in the months to come!

(Thanks to Robert and Douglas for the tip!)

I can’t believe anyone would actually want to see this. The Stargate film is, by far, the weakest aspect of the franchise (other than the cartoon). All three TV series were FAR superior to that weakly written and directed movie. Emmerich is a complete hack, and letting him do a sequel to that film instead of continuing the TV franchise is a massively stupid decision.

I am beyond excited. The original movie is what started the whole franchise, it was my introduction to the Stargate saga and it’s because of it’s success that the Stargate series even existed. Emmerich never did get the chance to tell the complete story the way he wanted to, and I’m nothing if not curious about where he intended it to go. I love the Stargate universe and everything about the shows, but they had their day in the sun. As much as I would love them to continue, I feel that they’ve run a healthy course. The Stargate universe… Read more »

So let me get this straight…
Independence Day, which was based upon the script for a Stargate Sequel, is getting made into a trilogy, in which they want to “world build”.
At the same time they want to reboot Stargate, who’s main popularity lies, not with casual audiences but with the TV series fans, so that they can “tell the story they always wanted to”…

Unless Emmerich concedes that the TV franchise is his strongest weapon and acknowledge that, I think any Stargate movie he makes may only generate moderate interest.

this is stupid, and this is selfish on the part of emmerich/devlin.

if mgm thinks giving the stargate franchise back to emmerich/devlin will breath new life into the franchise, i think both parties are in for a rude awakening.

17 seasons worth of stargate stories is going to be something *very* hard for emmerich and devlin to surpass.

It’s like they want to revive the franchise just to kill it again.

Meh. The best part of the Stargate franchise was the TV series. I saw the original movie and wasn’t all that impressed by it. The involvement of RDA was what drew me in (I grew up a huge MacGyver fan). With that said, I’m not saying that the reboot will be terrible. I will watch it, but not expecting to be blown away.

I’m not going to pass judgement on a Devlin/Emmerich Stargate re-boot until I’ve actually seen the movie. That said, I’m keeping my expectations low.

Sheesh, series fanbois foaming mouth much? Stargate creators Emmerich and Devlin do not need to respect the series stories; if they did, in my opion that would be very lame and unimaginative of them; which of course they won’t do. Give the film a chance, remember that it was the two guys creation in the first place and if you really consider things there are quite a number of differences to make this very separate the series, bar the main device. Don’t like prospect of a new films? Don’t watch them. SG-1 and spin offs had good innings. Just so… Read more »

Um……respect does not mean keep everything the same. Imagination is good. But keep with the general theme, I don’t see the need to start over and disregard everything from previous movie and all series. If I was gonna be anal about it, I would mention the differences between the movie and sg1 and so forth. But I won’t as I don’t really think it’s an issue. I just believe that they face alienating the current fan base which could really effect post cinema revenues e.g. dvd sales or purchase from digital sources. I also believe that a rehashed effort would… Read more »

Great news but it could take 3 to 5 years to be made. I think this new star gate will be about on the lines of SGU.

devlin and emmerich are jealous, and always have been. while their movie was moderately successful and did spawn a new series based on it – the series is what made it a hit. and they know this. i can understand emmerich and devlin wanting it back, but they’ll never have the critical or fan success they’ve always wanted. the tv franchise trumps it in every single way. and they know this too. i can even understand mgm wanting to start over, but the fans of stargate are *way* more for the tv franchise. it’s also way too soon to be… Read more »

They are ignoring what the fans want… again
Can’t they remember what happened with SGU?

I dont know why Devlin hates the series so much. I recently watched the 15th anniversary version, and Delvin made it very clear that the film has nothing to do with the series. I enjoyed the movie when it first came, but I absolutely fell in love with the series. To be honest the only thing the film has over the series is the soundtrack and score. I think David Arnold composed one of the best soundtracks in the history of cinema. Since it’s a reboot, I dont realy care if it’s tied in with tne series or not, ive… Read more »

Guys, chill out. I’m a huge fan of Stargate SG-1, Atlantis and even SGU. I actually don’t like the movie. But I’m going to give movie a shot. I’d like to see where the gate came from in their “world”.

And making the movie based off the show wouldn’t be smart. It’s no where as big as Star Trek. They need to find a happy balance of keeping fans happy and getting new fans. Hopefully they do better than SGU, which killed the series (although I love that show!)