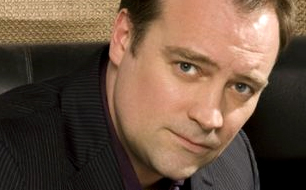 Stargate‘s David Hewlett has been cast in the futuristic espionage thriller Incorporated, Syfy Channel has announced. The project is currently at the pilot stage, with production commencing later this year.

The series is set in a dystopian future where corporations have unlimited power, and a young executive named Ben Larson (Sean Teale) who risks everything to infiltrate the all-controlling corporate world and save the woman he loves.

Hewlett (Stargate Atlantis‘s Dr. Rodney McKay) will play Chad, described as “a high-level executive at SPIGA, the all-powerful company in Incorporated, who has reached his position by appeasing his superiors and taking credit for the achievements of his subordinates.”

It’s not clear if the character would continue past the first episode, should Incorporated be picked up to series.

The show stars Sean Teale (Reign) as Ben; Georgina Haig (Once Upon a Time) as his wife Laura, a successful plastic surgeon; Eddie Ramos (Teen Wolf) as Theo, a man connected to Ben’s past who lives in the poverty-stricken Red Zone; Julia Ormond (Sabrina) as Elizabeth, a powerful top executive (and Ben’s mother-in-law); and Dennis Haysbert (24) as Julian, head of security at SPIGA headquarters.

Finally, actor Ian Tracey (Continuum) will appear in (at least) the pilot as Terrence, “a corrupt businessman who quickly becomes a benefactor to Theo, but could also become a threat to Ben’s plans for SPIGA.” Tracey played one of Colonel Simmons‘ lackeys who helped hijack the Prometheus in a sixth season episode of Stargate SG-1.

David and Alex Pastor created Incorporated and wrote the pilot, and will also direct.

Hewlett currently can be seen on Syfy’s Dark Matter in the recurring role of Tabor Calchek, the Raza crew’s unscrupulous “handler.”

(Thanks to Mark for the tip!)

I’m not really excited about this show, which is weird. I like the concept, and I like David Hewlett.

I’ll watch the pilot for David Hewlett– it would be good to see him back on TV on a regular basis!

A tv-show involving a dystopian future with an all-powerful corporation… Sounds alot like: Continuum?