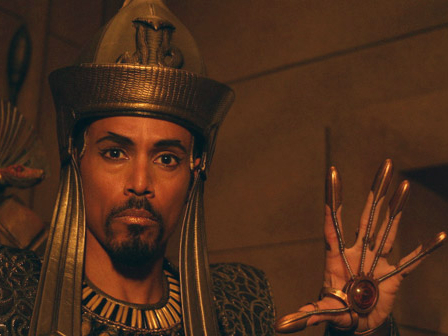 SG-1 travels back in time in a daring plan to steal a piece of Ancient technology from Ra, the powerful Goa’uld who ruled in ancient Egypt. But after their own timeline is changed, an alternate version of SG-1 must use the newly-discovered time ship to set things right.

Rewatch “Moebius” this week! Then post your comments below, or head over to the “Moebius” discussion forums and see what people were saying back in the day. What are your favorite moments?

I know lots of people hate time travel, but I loved this ep. Loved the “alternate” personalities of our favorite characters, thought it was very well acted. Of course, not mentioned above it gave some great satisfaction to the Sam/Jack “shippers” as well. I love “Rodney Mackay’s” appearance as well. If you have missed this, watch it!!

This episode is what I consider to be the true finale of Stargate SG-1. Anything else would…pointless.

And you can’t forget Kawalsky! This was his final appearance, in this alternate timeline, and his third cameo since his death in S1E2, “The Enemy Within”. (The other times were a disguise of the Keeper in S2E4, “The Gamekeeper”, and an alternate reality version in S3E6, “Point of View”.