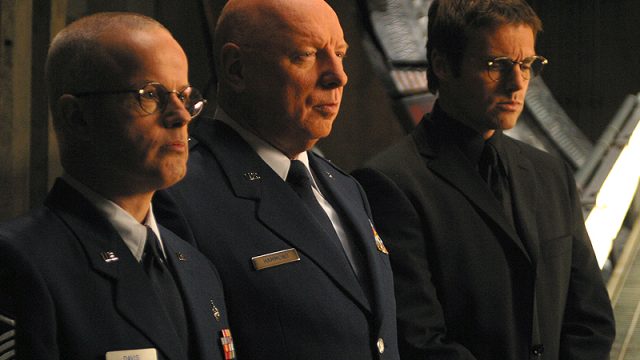 GateWorld celebrates 20 years of Stargate SG-1 with a close-up look at two of its finest hours.

After seven seasons spanning two different networks, the SG-1 writers took a confident departure from the show’s formula into some raw, emotional, and thought-provoking material in the form of the two-part episode “Heroes.”

Sci-fi favorite Saul Rubinek (now known for his role as Artie on Syfy’s Warehouse 13) plays Emmett Bregman, a socially awkward, nosy, and overbearing documentary filmmaker with best of intentions. His insatiable desire to capture the raw truth and the story of Stargate Command on film clashes with the anonymity and secrecy that the S.G.C. and its personnel value so highly.

With tensions rising due to Bregman’s invasive style — and soon a newfound government scrutiny looming due to a recent off-world disaster — “Heroes” touts a surprising gravity that reminds the audience that what they are watching might not be so fictional. The adventure and humor that otherwise gives SG-1 its lighthearted tone eventually gives way, and the full realities of who these people are and what they do in the field settles in.

“Heroes” highlights a thought-provoking and culturally relevant dilemma. Stargate Command had, up until then, operated under absolute secrecy, with little public knowledge or documentation for posterity. But should they be allowed to? Could it even be deemed irresponsible that the S.G.C. was permitted such high levels of independence with only minor supervision when billions of individuals and the fate of the planet rested in the hands of a select few U.S. Air Force personnel?

Is it moral that the very taxpayers who fund the Stargate program have no say in it — and are, in effect, unknowingly surrendering their lives to the “wisdom” of Stargate Command? Should there be adequate documentation and scrutiny of such an operation — or would that hinder the effectiveness of such a sensitive operation?

These and other questions brought to Stargate Command by Emmett Bregman don’t have obvious or easy answers.

The nature of these questions is extremely relevant to our world. A few years ago, NSA contractor Edward Snowden leaked a series of documents revealing several highly classified projects detailing new, invasive global surveillance technology being developed by the U.S. government. While there were no revelations of aliens, spaceships, or government-funded intergalactic travel, the same sorts of questions arose. Is Snowden a patriot, or a saboteur? By documenting and revealing this information, did he fortify our national safety, or destroy it?

Certainly, the specifics are vastly different. But the documentation and potential revelation of the Stargate program inside the fictionalized universe carries a lot of parallels to and commentary upon our world, and I loved how the events of the episode brought these topics front and center.

The brilliance of “Heroes” isn’t just the intriguing dilemma, but its fusion with sincere and visceral character moments. “Heroes” demonstrates the show’s versatility while staying true to the characters and the greater Stargate universe. The implementation of Bregman’s documentary footage (much like the use of kino footage years later in Stargate Universe) allowed the audience to see the characters’ more candid side. The scenes brought out insecurities and quirks, and we saw S.G.C. personnel begin to reflect on their work — and even how they view themselves.

What ultimately adds to the authenticity and raw, realistic tone of the two-parter was the emotional death of Dr. Janet Fraiser. While long-running television shows have a tendency to kill key characters for shock value, or to cover for an actor’s departure from the production, this sacrifice felt organic … and it is easily one of the most emotionally significantly character deaths in the history of the long-running franchise.

Producer Joseph Mallozzi stated in his blog that “the writers’ room was divided on the death of Janet Fraiser. But, after much heated debate, it was decided that since this was going to be the (perceived) final season anyway, it was the perfect time to tell this story — a salute to our armed forces, those who fought, and those who’ve lost their lives in the service of their country.”

And indeed (though SG-1 would go on for three more seasons), it was told quite powerfully. I’d be lying if I said I didn’t tear up multiple times (even on the second re-watch, I might add). Perhaps what resonated with me was the realization that this story serves as a representation of what real-life armed forces personnel deal with. Despite the overarching ethical questions raised in “Heroes,” what ultimately shines through is the dedication, selflessness, and sacrifice displayed by those who serve.

“Heroes” is a different kind of Stargate episode. It took risks. It broke conventions. It made a strong statement. It had heavy political and ethical intrigue, in addition to sobering emotional content. It isn’t the kind of story we had come to expect from SG-1, but it was told with such conviction that it became some of the best television I’ve ever seen. Something that still rings true today.

And not only did it solidify Stargate‘s legacy, but it reminded us of the legacy left by those in uniform.

Given the title and themes of this episode, I’d like to dedicate this entry to the courageous soldiers who serve their country on a daily basis, especially those stationed overseas — separated from their families and in harm’s way. Thank you for your service.

These episodes ruined Stargate. I wish they didn’t exist, I try pretend they don’t exist. Who in their right minds kills off favorite characters if they want people to keep watching? What happens is the OPPOSITE!