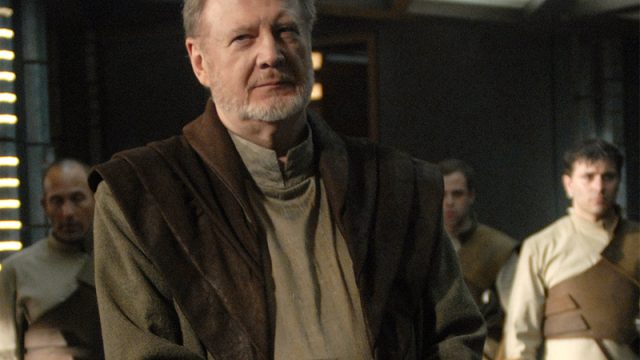 Legendary television and voice actor David Ogden Stiers has passed away at his home in Newport, Oregon, The Oregonian has reported. He was 75.

Born in Peoria, Illinois, Stiers’ breakout role as an actor is still perhaps the one he is best known for. After a string of TV guest appearances, in 1977 he was cast as Major Charles Winchester in the CBS comedy M*A*S*H*. He would be nominated for two Emmy awards for his work on the long-running series.

In the science fiction world Stiers made a memorable and moving guest appearance in the Star Trek: The Next Generation episode “Half a Life.” He played Timicin, an alien scientist facing the end of his life in a culture that requires ritual suicide of its aged population. 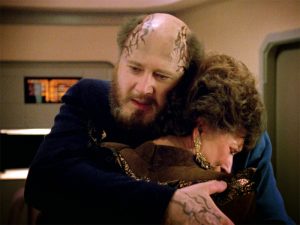 Stiers appeared with the late Majel Barrett in the 1991 Star Trek: The Next Generation episode “Half a Life.”

On Stargate Atlantis he turned to a villainous role, playing the pivotal role of Oberoth — leader of the Asurans, a powerful society of Replicators in the Pegasus Galaxy. Stiers first appeared in the role in the third season episode “Progeny,” returning for a brief appearance in the season finale “First Strike” before a bigger return for the character in Season Four’s “Lifeline.”

Before that he was the complicated antagonist Reverend Gene Purdy in 40 episodes of the USA Network series The Dead Zone, based on the novel by Stephen King.

Stiers’ voice was as distinctive as his screen presence. His long list of credits also includes a litany of voice acting for animated productions, including Beauty and the Beast‘s Cogsworth and Lilo & Stitch‘s Jumba. In the DC animated universe he voiced the gorilla leader Solovar in several episodes of Justice League and Justice League Unlimited.

Stiers had been battling bladder cancer.

Sad to hear this news, he was a great man and an amazing actor. Will be missed :(