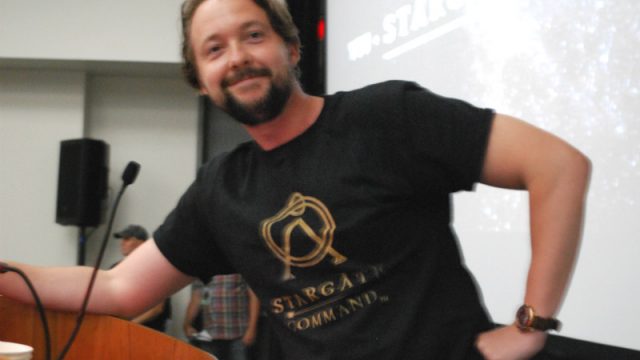 Under the program title “Stargate Franchise: Creative Storytelling” the panel spoke of how fans have built upon the shows’ fictional universe with fan sites, online community, prop-making, and more creative outlets.

So what’s the future of the Stargate franchise? If you’ve been reading GateWorld over the past several months you know we have been asking that question in lots of different ways, with editorials, videos, podcasts, and more speculating on where the universe we love might go next.

While fans hoped for a big reveal (how about a fourth live-action series?) MGM didn’t have a major announcement at this year’s event — instead indicating that the wheels are turning and an announcement is coming shortly down the road.

It was in San Diego last year that MGM announced the short-form Web series Stargate Origins, along with the launch of the new digital platform Stargate Command. 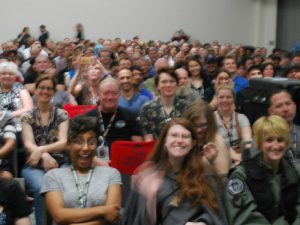 Stargate fans gather at Comic-Con for this year’s panel event.

Origins debuted at Stargate Command in February, running its 10-part series of webisodes over four weeks. The full production is now on sale at digital retailers as a single, feature-length cut, under the title “Stargate Origins: Catherine” — suggesting that additional Origins stories may be likely.

Judge took the opportunity to reiterate his desire to tell what might be two different Jaffa stories, in some form: one about where the Free Jaffa people have come since SG-1‘s end, and also an origin story for a young Bra’tac. (More on that soon.)

DeJulio described Tongal’s business model of fan creativity, which helps connect fans with the studio to do their work in ways that avoid running afoul of legal issues.

And Newbury — in full S.G.C. cosplay! — described his first efforts at Stargate prop making (with a G.D.O.), which eventually led him to work with Propworx on the official Stargate auctions several years back. Today Dean is at PropBlock, which sells props from beloved science fiction and fantasy movies and shows.

The full video of the panel will be posted on Stargate Command’s YouTube channel in the days to come. GateWorld is on the ground in San Diego now and will also have full, rolling coverage of Stargate’s presence at Comic-Con.

Still To Come: Stargate Origins premiere screening with the cast on board the U.S.S. Midway!

This is ridiculous. There is hype, the community is buzzing, a lot of people have payed for the mediocre (at best) SGO, and MGM is still just planning and “working on it”. A lot has changed since the Stargate era. There is big money in the TV industry. What the hell are they waiting for?

If they do Stargate Origins: Bra’tac, they better bring Peter Williams back as Apophis.

I feel your frustration for sure, Nekomajin. They’re trying to get their ducks in a row to be ready to announce something (and likely more than one thing). I wish they’d had it sorted and ready by the spring, after Origins was done, let alone Comic-Con … but my sources tell me there is at least one very good reason for this delay. The studio also seems ready to say that more info will be available at Gatecon in Vancouver, Sept. 14-16. We’re working on this story, and hopefully getting GateWorld to Gatecon so that we can report it all… Read more »

Thanks for the heads up. I just hope they don’t mess it up. SGO was such a great idea, but it turned out to be a huge fail. The story was completely unnecessary. They could have done many stories with the young Catherine, which did not twist the existing canon, but they wanted to unfold something, which should not be explained further. They wanted to be movie and SG-1 and unique at the same time, but they managed to be none of them. And let’s be honest, the result, independent from the story was poor. I can forgive weak acting,… Read more »