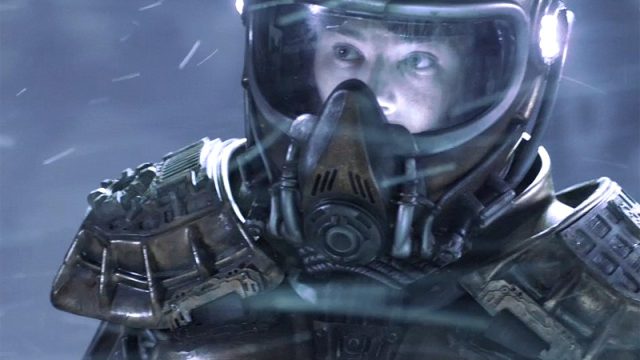 So far our reluctantly intrepid heroes have arrived on board the Ancient vessel Destiny far from home. They’ve found breathable air, and survived a power outage and a plunge into a star (which turned out not to be as catastrophic as they had feared). So what resource do they desperately need next for their survival? Sarah picks up her journey with episodes 6 and 7:

To quote Colonel Everett Young: “We have a problem … again.” The crew of the Destiny is running out of water. Despite rationing and constant monitoring, the missing 40,000 liters of water can’t be accounted for. With only one tap on the ship, it’s hard to think that someone is managing to steal it. But there are no indications of leaks according to the systems on the Destiny. So what else could it be?

Unbeknownst to the crew the reason for the water disappearing is swirling around the ship like an apparition on Ghost Adventures. A mist / cloud / ghost in on board the Destiny, causing water-depleting shenanigans and endangering everyone on board. 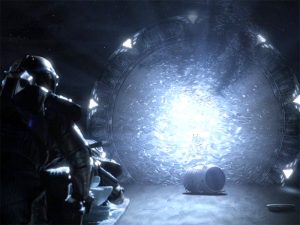 James is growing on me at this point. I had kind of brushed her off before, but I can appreciate the restraint and resolve she’s showing to stay professional after walking in on Scott and Chloe.

The Destiny drops out of F.T.L. and allows access to an ice planet to solve our problem of the week. To be able to breath planet and hopefully bring back some clean water Young and Scott suit up in some steampunk Master Chief Ancient designed space suits and go through the gate. Eli volunteers his latest invention: a hoverboard. Okay, they call it a sled, but dude made a hoverboard.

The ice, like the atmosphere, is contaminated and I wonder if the Stargate itself, or the wormhole, have anything to do about it. Surely people bringing foreign dust, mites, and particles into a new ecosystem can mess with it. I wonder how many planets across the galaxies we’ve ruined with our Earth-based grossness on the bottom of our boots? 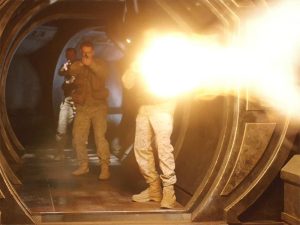 MSgt. Greer tackles an invasive species with his trusty flame-thrower.

Frankly, I wasn’t too into this side of the story. I like the Young-Scott dynamic but the “save yourself” plotline didn’t explore it in an interesting way, in my opinion. I was much more into seeing more of Johansen and Greer. In a show with so many potential characters, I think they could spare an episode or two to center on someone other than Scott, Young, Eli, or Rush. I’m glad they gave an A-plot to some other characters, but I think they could carry an entire episode easily. I hope SGU embraces its potential as an ensemble show and lets the fringes of the cast shine more.

Speaking of the fringes of the cast … Sgt. Spencer has water and energy bars hidden away in his quarters!

Johansen restricts everyone to quarters and Rush makes the connection to the Planet of the Apes planet where Scott was lead to the lime by a swarm of alien gnats. I felt dumb that I didn’t immediately catch onto the connection when they first showed the alien gnats this episode. However, watching Greer go full MacGyvered flamethrower on those buggers was great.

In “Earth” we get some good old body-swapping, long-range communication stone action. I loved when they introduced body swapping in SG-1 (“Avalon, Part 2”) and I love SGU using it as a major component of its storytelling. 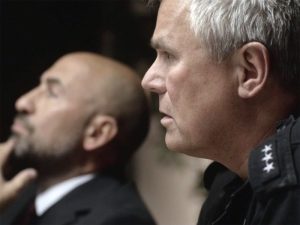 General O’Neill is surprisingly pro-I.O.A. in this episode.

I do have some questions as to how many civilians with no government clearance we’re going to let in on our little secret. At some point, it gets hard to believe that no one is trying to go public with the information. Every few episodes a civilian gets let in on one of the biggest secrets the military has … and we all just nod along? I’m anxious that it’s going to blow up at some point.

I was very distracted by the idea that on SG-1 or even SGA, O’Neill would have agreed with Young. O’Neill would have never just blindly obeyed an order that put his entire crew at risk. I found it very distracting to see O’Neill seem all offended that Young wasn’t ready to make the tough call, without all the information or all sides considered. I’m firmly in Camp Young on this one and I’m mad at O’Neill for going all “I.O.A.” on this.

As for Eli and Chloe’s side of this episode, I was all about the Buffy the Vampire Slayer vibe here. Seeing Chloe and Eli hanging together at The Bronze brought back some warm fuzzies. 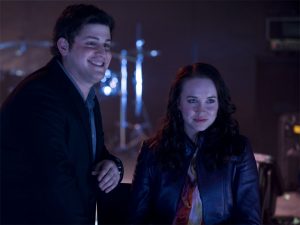 Eli and Chloe hit the town in a rare visit home.

Also: all the feels for Eli hanging out with his mom under-cover as “Philip (J.) Fry.” Making cookies and maintaining the lie … it was so sweet, and my Eli-loving heart couldn’t get enough of those scenes.

OMG and Eli and Chole in the car after leaving the club? Such a ship-tease. I have a feeling I’m on the losing end of the love-triangle, but I ship it all day long.

I had a realization while thinking over these episodes. Yes, SGU is way different from SG-1 or SGA. See, the Stargates shows we were originally given were action-based adventure dramas. There were sci-fi shows that blew things up, and ran around shooting bad guys, and saved the world from evil aliens. But SGU is a character-based drama with sci-fi elements. We don’t have aliens threatening life as we know it.

What we have is humans stuck together, Big Brother-style, and we’re watching their drama and relationships.

In the Next Installment: The Season One fan favorite “Time” and the controversial “Life.” Stay tuned!

Darren & David discuss both episodes as they happen on the GateWorld Podcast!

I’d have to say the Big Brother-esque nature of the show really turned me off at first. I still don’t like it that much. Thankfully the show does change later on.

Hi Sara, Loving your reviews. Keep them coming. At least Scott is always dropping his pants for the same person at this point. One thing that I loved about this show was that it did go into depth for a number of the lesser characters. It gave a chance for a lot of bit actors to show they could handle more complex work. In particular, this show is largely responsible for giving Patrick Gilmore and Jennifer Spence more extensive parts on Brad Wright’s new Netflix show, Travelers. I recommend checking that one out — it’s building quite a fandom. I… Read more »