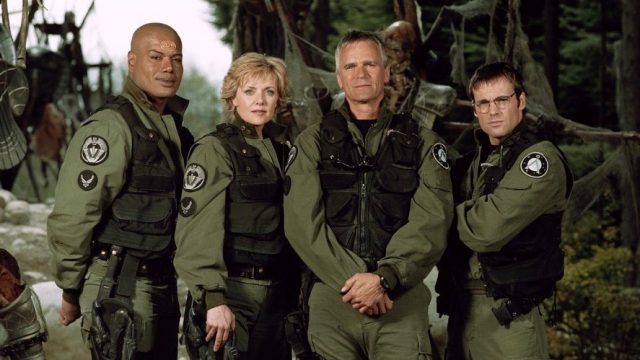 Hello Gaters! Allow me to introduce myself. My name is Sarah Carroll (a.k.a. StargateZone) and I am a Stargate addict from the United Kingdom.

I adore everything about Stargate: all three series, the actors and actresses, the production crew, and most importantly — the fans!

Stargate has been such a constant and positive influence in my life — not what I would have expected from a small cable TV show that I first discovered as a 12-year-old girl. And it still remains a big part of me today. (My extensive Stargate memorabilia collection can attest to that.) 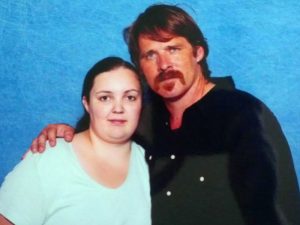 My photo with Stargate SG-1 and Farscape legend Ben Browder!

So let me take a few minutes to share my incredible journey with the Stargate franchise and how Stargate has shaped my life in the most wonderful of ways.

I have been a fan of sci-fi television ever since I sat down with my father to watch Star Trek: The Next Generation in the 1990s. I was very young at the time, and it wasn’t until I saw Captain Janeway lead the Star Trek: Voyager crew across the universe that I became fully enthralled with the concept of space adventure and galactic exploration.

We know so little about the vast ether of the universe, but with the magic of visual effects and intelligent storytelling, anything is possible. Voyager also blended elements of science and technology, and brought authenticity to futuristic, space-faring adventures. All of this heavily influenced my pre-teen years.

Then came the moment I was waiting for. In 1994, I pinched my sister’s VHS copy of a film called Stargate. 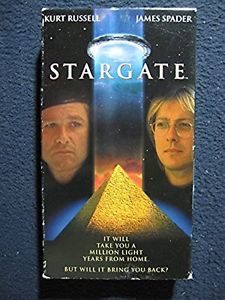 An ancient Stargate artifact: the VHS for the 1994 film that started it all.

At the time she had a huge interest in Egyptology (she later visited Egypt and toured the Valley of the Kings) and as such, was drawn to the original Stargate film. After learning about hieroglyphs and Egyptology in school myself, I too became interested in the subject matter. And like any little sister — I wanted what she had. So I gave Stargate a shot.

Upon first watch I thought it was okay … but it didn’t leave a lasting impact. (Hang with me, here!)

Time went by, and I all but forgot about the movie. Then, in 1997, I once again found myself sitting down with my dad to watch a new television show — this time, a new sci-fi adventure series called Stargate SG-1.

I remembered the original film (though not with any particular clarity), and I was especially curious to see who this Richard Dean Anderson guy was. Surely he couldn’t replace Kurt Russell …

Boy was I wrong. The humor that RDA brought to Jack O’Neill (two “L’s”) set the tone for the entire reboot and gave new dimension to the existing character, despite the recast. He immediately found a way to charm while still commanding respect.

Then the show introduced Captain Samantha Carter, and wow — I wanted to be her (even if she had lines about her reproductive organs being “on the inside”). She was beautiful, but that wasn’t her foremost characteristic. Instead, Sam was immediately defined by her intelligence and strength. 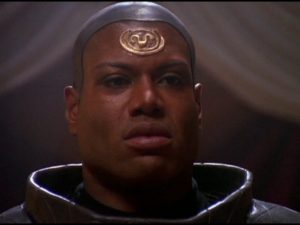 Teal’c’s struggle for redemption was equal parts captivating and heartbreaking.

Then there was Teal’c — my Mum’s favourite character. At first you think he’s just the muscle, but like every other character you learn that there is much more to him. He comes from a dark and alien place, but you still relate to his struggles and cheer him on in his quest to do what is right.

I also remember being impressed by Michael Shanks’s portrayal of Daniel Jackson. If you look past the glasses and floppy hair there is an honest man striving to learn as much as he can about foreign civilizations and our place in the universe. And he never gives up in his quest for knowledge.

Needless to say, after the first few episodes, I was hooked. I came to love everything about the Stargate universe and the characters who populate it. The small team interactions (like SG-1 fishing at Jack’s cabin) made me feel warm and fuzzy inside. Kind of like when your mum cooks you your favorite meal, and you just know everything is going to be okay.

As the series progressed I began to feel like I was growing up alongside SG-1. The team matured and developed as characters, and I found myself learning actual life lessons from their adventures. Most importantly: they had a sense of humor in the face of adversity. 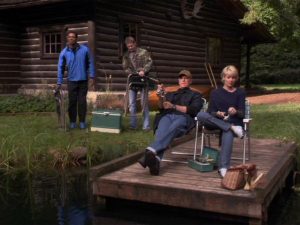 Moments of peace and tranquility made SG-1’s chemistry all the more meaningful.

That in particular struck a chord. There have been times in my life where I have struggled severely with my health. Sometimes it felt like the walls were closing in. But Stargate was always there to give me comfort.

Don’t get me wrong — I have a loving and supportive family. But when I’m alone with my thoughts, or unable to sleep, or in need of a positive distraction, I would put on an episode of Stargate and lose myself in another galactic adventure.

— An adventure with characters who were starting to feel like family.

Though I was eager to spread my love for SG-1, none of my real world friends were into sci-fi. At the time, being a “geek” wasn’t accepted or cool like it is now, so that aspect of my life remained hidden.

But when dial-up Internet became available in my house, the first Web site I visited was GateWorld (and its forum) — and I struck up a dialogue with fellow fans, who helped foster my passion for the Stargate franchise and its lovely community. 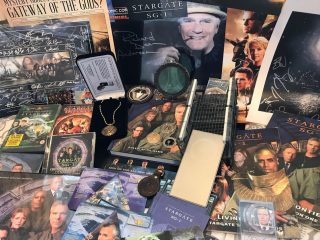 A sample of my collection. And this is just scratching the surface!

For hours on end I would trawl the Web for Stargate news and merchandise. I snatched up tons of memorabilia including (but not limited to) trading cards, comics, magazines, DVDs from Woolworths, novels, audio books. Anything with “Stargate” on it, I had to collect.

And little did I know that I would eventually get to meet several of the actors and producers who brought to life these stories that I fell in love with. I still give out a little geek eek when I get a like or retweet (or in special cases, a reply) from a Stargate professional. It truly adds to the sense of fandom community.

At this time in my life I was attending university for a degree in new media. But instead of focusing on my studies, I was using my newfound Photoshop skills to create Stargate collages, Stargate animations, and fan videos. Everything I produced would be Stargate-related: bookmarks, posters, key rings, books, Teal’c felt dolls, and portraits of our iconic heroes. The list goes on.

Through Stargate memorabilia trading I learned the art of e-commerce and eBay. I started up my own online clothing business (which I have continued doing for the past decade). It’s yet another way that Stargate has positively influence my life. 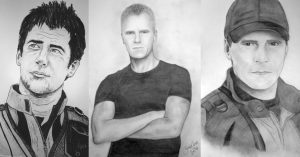 A few of my Stargate character portraits

After University I met my fiancé, who had not seen a single minute of Stargate! Of course, the first thing I did was lend him my box sets to rectify that problem. He embraced my geeky side, and even booked me tickets to my first convention (London Film and Comic Con in 2012). There I met Chris Judge (“Teal’c”), Jewel Staite (“Jennifer Keller”), Ben Browder (“Cameron Mitchell”), and Mitch Pileggi (“Steven Caldwell”).

I’ve since been to Wales Comic Con in Wrexham (where my fiancé is from) and Collectormania at the N.E.C. in Birmingham. The Stargate actors in attendance are always the kindest and most generous individuals. I’m still quite shy (working on that), but I usually manage to share a little conversation with my onscreen heroes when I attend.

And when fellow fans walk by in SG-1 cosplay, you can’t help but smile and feel like you’re at home.

(Also, is it just me or does everyone’s photo shoot come out really bad? At least compared to all those beautiful actors!) 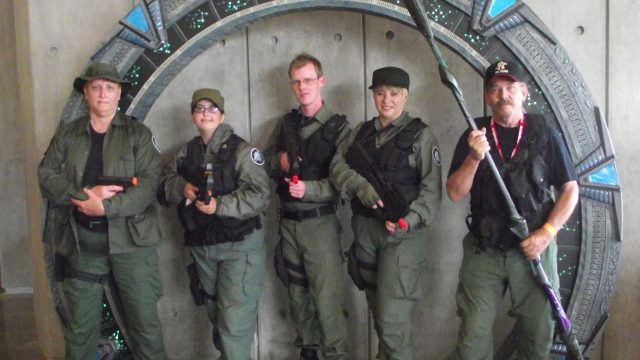 Stargate SG-1 evolved with the departure of Richard Dean Anderson, and when Stargate Atlantis premiered I feared I wouldn’t connect with the series like I did with its predecessor. But lo and behold, after a few episodes I was collecting Atlantis memorabilia too, and discussing the show with fans on GateWorld Forum. 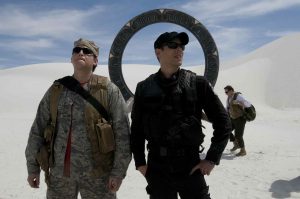 Stargate Universe depicted a harsh and unforgiving battle for survival — a departure from what old-school fans like myself were accustomed to.

When Stargate Universe came around, I was more than willing to give it a shot — but I still didn’t like how dark it was. There simply wasn’t enough humor or classic Stargate levity. Of course, it was nice to see the odd cameo from SG-1. But it wasn’t until I watched the series for a second time that I really enjoyed its heavier approach.

After SGU was cancelled in its second season in 2010, I felt like Stargate’s community might go extinct. But thankfully there was still a large online presence, and fans stuck around for years to come. And of course many conventions continued to celebrate the franchise.

So perhaps there was some hope?

Just last year we were given a taste of that hope with Stargate Origins — but it left me wanting so much more. It was admittedly smaller in scale than what Stargate fans were used to. Yet it proved there was still a hunger for more live-action Stargate adventures, and left the fan base re-energized. 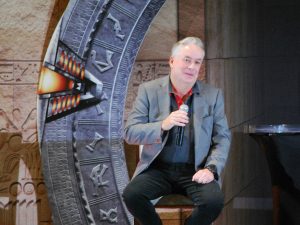 Brad Wright on stage at Gatecon: The Invasion in September

With the latest Vancouver Gatecon convention wrapping up last month, you can see how much of a family Stargate fandom has become — even with the shows’ extended hiatus. Having Mr. Brad Wright back on the main stage to talk about Stargate’s future (and his involvement in the talks) gives fans the hope we need — the hope that some of Stargate’s best days are perhaps yet to come.

So I look forward to interacting with more people from the Stargate fandom online and at conventions — whether they are new to the franchise, or like me have watched it from Day One. The global fan base is truly wonderful, caring, and special, and I am honored to be a part of this exemplary fandom.

So let’s keep celebrating Stargate together!

“My Stargate Story” celebrates the impact that Stargate has made on the lives of everyday fans! Stay tuned for more, and let us know if you want to share your story here.

Sarah has been a Stargate fan since the the very first unscheduled off-world activation in 1997. She currently lives in Cheshire, U.K.

There have been five: SG-1, Infinity, Atlantis, Universe, and Origins.

I’m trying to understand the point of this article… but to be honest, I don’t really see one. It’s not informative at all–it’s the equivalent of a fan letter. I thought this site was more journalistic and professional than that.

This was a nice shot of nostalgia. Thanks for sharing. I’d imagine a lot of us can relate to this, well, not the meeting Teal’c part but whatever :)

‘Tis a good piece, giving credit to the chemistry amonst the actors in the franchise. When I read about Sarah and her dad, I flashed upon the movie Contact with the parallel dad/daughter.
Personal note – I plan to visit (Winsfore) Cheshire in 2019. Is there a Chappa’ai nearby?

I wish there was a gate here, feel free to bring your own!