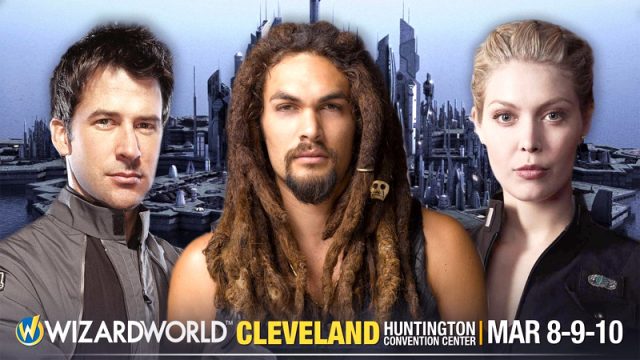 Wizard World has added a trio of Stargate cast members to its fan convention in Cleveland, Ohio next weekend.

The convention takess place March 8 to 10 at the Huntington Convention Center. Tickets are on sale now, including a special group photo op with the Stargate cast.

Other stars also appearing include cast members from Smallville, Charmed, Constantine, and more.

For those in the St. Louis area, Momoa is also set to appear at Wizard World’s St. Louis event in early April. He also appeared at the recent events in Portland and New Orleans. 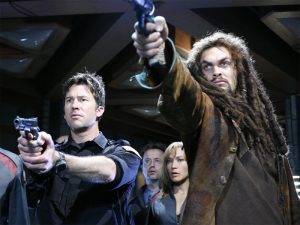 Sheppard and Ronon make a formidable team on screen. From “Ghost in the Machine”

Flanigan is currently appearing in an ongoing role on General Hospital, while Momoa can be seen in the Netflix drama Frontier. (He’s also filming the forthcoming AppleTV original sci-fi series See.)

Huffman will next appear in the thriller The Perfection, premiering May 24 on Netflix.

The Wizard World event draws tens of thousands of fans to celebrate pop culture including movies and TV, comics, video games, anime, manga, and more. For more on these events visit WizardWorld.com.

I love Stargate I’ve been a fan since the beginning. I still learn something new everytime I watch them .